This week boasts an unheralded amount of restaurant openings, but next week's looking pretty busy as well. Here's an update on a few of the projects due this fall. 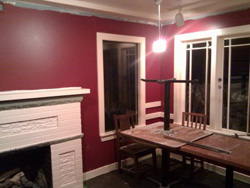 MADISON PARK—Chef Celinda Norton's Cafe Parco is rolling along with an official logo and conceptualized menus. The Norton family is dealing with finishing touches on the space, and some permiting issues, but shooting for an October 10 open in the former Madison Park Cafe space. [Cafe Parco]

UPPER QUEEN ANNE—Well I'll be damned. Sam Crannell says he might very well hold true to his original promise that LloydMartin will open its doors the first week of October. He's got a website up and recently shared this pic of a dish slated for the opening menu. [Facebook]

EASTLAKE—Charles Walpole and Rene Gutierrez are still at work turning the former Nettletown space into Blind Pig Bistro. No signage is up yet, but the latest word is that opening might happen early November. [EaterWire]

PHINNEY—The sweetening of Phinney Ridge continues, with word that a new retail location for A La Mode Pies is about a month away from opening its doors. The target open is the first half of November, just in time for the holiday pie rush. [Table Talk]