Welcome to The TasteMakers, where we scour the fair city sussing out intelligence on your favorite bakers, bartenders and cooks. Today we’ve got Rhiannon Devine of Lilli-Pilli Patisserie. Hailing from Australia, Rhiannon--winner of a recent Seattle Met taste test of macarons--is in Puget Sound spreading the joy of macarons. To sample her macarons, order online. 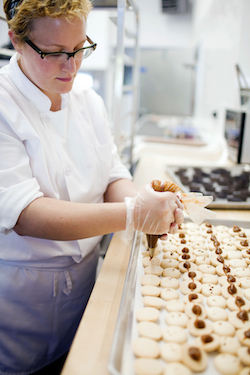 Where does the name come from?
Lilli-Pilli Patisserie came about from my love of baking, confiture, and farm-fresh produce. Lilli-Pilli is an homage to my home country Australia without being too overt in the reference. Lilli Pilli is a native plant that produces berries that you can make into jam, and is also a suburb in New South Wales.

What made you decide to focus on macarons?
I adore making macarons! They are finicky, challenging, diverse, and beautiful. I really do love that the same base (mostly just an almond base) pairs so well with the majority of ingredients I use, from a tart rhubarb jam to a rich lemon rosemary buttercream.

Now that the cupcake trend has come and gone, do you think macarons will be the next “it” food?
Perhaps. I know that they are big on the East Coast already, and when I went back home to Melbourne in April they were a big thing there. So, I guess it is a possibility. My only caveat: they aren’t always easy to make. Most people can make a pie or bake a cupcake (to varying degrees of success), but when you mess up on a macaron, you usually mess up pretty good and it’s pretty obvious. They require technical skill to make properly, so I don’t think there will be masses of macaron shops about, but you never know!

Top sellers? Any absolute busts?
My top seller by far is Fleur de Sel Caramel. I think it has one of the smallest ingredient lists I have (almonds, powdered sugar, egg whites, water, sugar, cream, butter and Fleur de Sel salt) but it works incredibly well in a macaron. Busts, I have made so many different macarons! Each week for the farmers market season I would make at least two new flavors so I tried a whole lot of different combinations. I think the biggest surprise people had was with a licorice caramel macaron. A lot of people generally don’t enjoy the flavor of black licorice, but I do. So, for me it worked out well. Many people were afraid to try that one, but when they did, they usually liked it!

How do you come up with your flavor profiles and how often do you rotate them?
Most of the time I look at product at the farmers markets and see what I want to do with them. For instance, I used a lot of blueberry flavors this year. I did a simple blueberry jam, a wild blueberry jam, blueberry with lemon cream cheese, wild blueberry with tarragon, blueberry with lemon buttercream, and blueberry with Pinot Noir. A lot of the time I’ll look through confiture books, baking books, chocolate books, cake books, etc. and see how people are using ingredients and translate that into a filling for a macaron. During the farmers market season I rotate my flavors every week, I usually make four types of macarons, and two of those flavors will be new each week.

How are you prepping for the holiday season?
By baking like a crazy lady! I have a limited menu for November and December (five flavors for each month) which means that I can be incredibly methodical in my baking!

What’s your favorite bakery?
In Seattle it would have to be Cafe Besalu. Their baked goods are beautifully crafted and well thought out. They genuinely care about their product. They also make a mean chai!

How does the Seattle food/pastry/macaron scene differ from Australia?
I feel that Melbourne, Australia has a really huge foodie base which has been established for a much longer time then Seattle’s. There are many well known and established bakeries there that have long traditions. Melbourne’s early immigration history meant that there were quite a few Italians and that can certainly be felt in the long established bakeries around town. Nowadays, the food in general is awesomely eclectic, especially with the diversity Melbourne has.

Seattle has some beautiful bakeries and has some seriously awesome breads. But it doesn’t have the same bakery mentality that Melbourne has. I grew up on a street that had three bakeries and I lived in the sticks! Sure, they weren’t world-class, but they were where you went if you wanted bread, a meat pie, a coffee scroll, or a vanilla slice. It’s just a different place for food here. I think people are getting back to really thinking local (bakeries as opposed to supermarkets) but we still have a long way to go!

Any plans for a fixed location?
Not yet! But maybe something mobile....