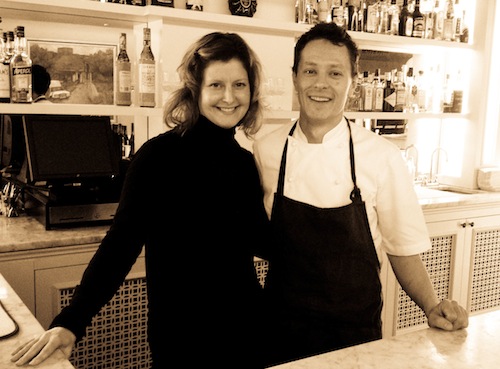 Book Bindery opened softly in October 2010, without much media hoopla but with great expectations. Much of the anticipation rested on the pedigree of chef Shaun McCrain, who spent four years at Thomas Keller's Per Se. During his four-year tenure, McCrain was promoted quickly to eventually reach the position of Executive Sous-Chef at the Thomas Keller Michelin three-star restaurant. A Seattle Central Culinary Academy graduate, he has worked at San Francisco's Masa and La Folie. In Paris, he worked at Les Elysees du Vernet and Taillevent. While at Per Se, McCrain met Jill Kinney, who he helped recruit to Book Bindery at the beginning of the year. Kinney became the General Manager in July 2011, replacing Patric Gabre-Kidan.

What did Thomas Keller teach you?

SM: Per Se taught me to always be on top of what you're doing, to be creative every day. We were so meticulous at the restaurant that we couldn't repeat ingredients throughout the menu: if we used apples in an appetizer, we could not use them in any other course.

Can you compare French Laundry to Per Se?

SM: They're 98% the same. The kitchens look almost identical. Keller is a great mentor, who leads by example rather than hearsay. He butchers and cleans after himself. He does not leave messes for others to clean up. I've taken in that long, hard work ethic in mentoring young cooks. I'm not expecting them to do something I wouldn't do myself.

Critical reception has been mostly positive, though there were some equivocal reviews. How do you respond to criticism?

SM: We try to stay focused on what we're doing in the kitchen. JK: We're thankful for the good ones.

Were there any difficulties building out the restaurant?

SM: This space had not been a restaurant before, so it took a bit more time. When we added the greenhouse, it expanded our seating capacity by 40%. Being so near Ship Canal, there were some additional hoops to go through to get that finished. We had to sink 250 pylons to prevent erosion.

Why did Patric Gabre-Kidan leave?

SM: Patric was the reason I moved backed to Seattle. But, he likes to launch projects. He's more into getting restaurants up and running.

Have there been any other big changes over the past year?

JK: We are closing slightly earlier Mondays thru Wednesdays, at 9:30 instead of 10. The demand isn't there from our regulars for later hours on those days.

What is your favorite place to eat in town?

How has the relationship with [Owner] Almquist Family Vintners impacted the restaurant?

SM: When we started the restaurant, Almquist only made red wines. They now make white wines[to provide more pairing options]. Part of what we're doing is offering food and wine at a price that isn't going to break you.

Has the recession or perception of a recession hurt your business?

SM: We keep our costs pretty low. We don't have the overhead of say, Canlis. In the kitchen, there are only six of us. Jill manages all front of house. I think people appreciate the quality of what they're getting at prices comparable to places that are a lot more casual.

Any upcoming changes you'd like to preview for us?

JK: We are offering a special New Year's Eve Menu for $125. Starting in 2012, we may offer Mother's Day Brunch and other special occasion brunches.