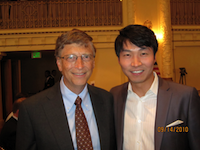 Just when you thought big money was tired of Groupon and its lemmings, mobile deal site Pirq announces that it's secured $2M in financing. Founder James Sun(remember him from The Apprentice?) says that one of the biggest differentiators between his product and that of Groupon and its ilk is that Pirq has "technology that automatically and intelligently schedules deals for the restaurant." So, a participating eatery would not have to manually set up time periods for deals. Rather, the technology would recognize when it's slow and generate the correct number of deals to offset the low business. [BusinessWire]