Share All sharing options for: Restaurant Pundits Name the Top Newcomers of 2011

As is the tradition at Eater, our closeout of the year is a survey of friends, industry types, bloggers, and readers. This year, we asked the group eight questions, from Meal of the Year to Top Newcomers — and we've already covered Top Standbys. All will be answered by the time we turn off the lights at the end of the week. Responses are related in no particular order; all are cut and pasted herein. 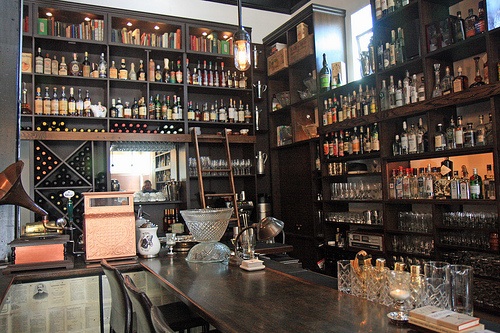 Jessica Voelker, online dining editor, The Washingtonian (former lifestyle editor at Seattle Met): I've never been so excited for a bar opening as I was Canon. Then, when it finally opened, my expectations weren't just met, they were exceeded. If that bar doesn't make all the Top Bars in America lists next year, those lists are all stupid.

Allecia Vermillion, food and drink editor, Seattle Met: I'd like to formally hop on the "Altura is awesome" bandwagon. Also, Blind Pig Bistro and Bar del Corso, and a host of fantastic neighborhood places: Dot's Delicatessen, The Sexton, St. Dames, or Nook for biscuit action and sheer adorability.

Allison Scheff, food and dining editor, Seattle Magazine: On the high end, Willows Inn is magical. It's grounded and playful and precise all at once. Skillet Diner is an instant classic: fun, the food is tasty, and I love the friendliness of that room. Bar del Corso is like Delancey south. Great pizza, great salads, great atmosphere, but with WAY less brag status attached (so you might wait for a table, but never as long as at Delancey).

Surly Gourmand: Coterie Room, which is so unapologetically olde skewl, it's a shock that more of the diners there weren't wearing monocles. They've got giant platters of steak and the best poutine I've ever tasted. Canon is also quite fetching. It's a bar, but they seat you inside as though it were a restaurant: no standing allowed. Once you've successfully secured a seat, however, the legendary Murray Stenson kicks in with his awesome bartender ultra power and makes you the most interesting cocktail you've ever tasted.

Lisa Kennelly, There's a hipster in my latte: The Fat Hen is my new favorite brunch destination, and they’re the only place in Seattle I’ve found that makes kanelbullar (cardamom buns) like the kind I tasted in Sweden. Revel opened in late 2010, right? Regardless, I still think it’s the best new restaurant to open recently.

Amy Pennington, author of Urban Pantry and Apartment Gardening: Blind Pig is destined to be though they really just opened so I have to go back a few more times before falling madly in love. Ting MoMo in SLU. You can not eat there without feeling a sense of calm and compassion. It's food with heart.