This morning's Plywood Report is awfully heavy on Capitol Hill. We promise we didn't plan it that way. 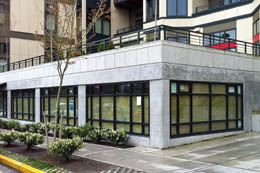 CAPITOL HILL—New bar and charcuterie spot Cure has pushed back its opening until 4 p.m. tomorrow, according to owner Amy Haldane. The opening was originally set for today, but you can sneak a few photos over at Capitol Hill Seattle blog. [EaterWire]

BELLTOWN—The nearly yearlong shuttering of Wasabi Bistro is over, says Thrillist. The restaurant reopens today with a sleek new interior and a mix of old and new menu items. Wasabi is also introducing a five-course tasting menu. [Thrillist]

CAPITOL HILL—The second location of Pike Place Market's The Confectional has set a June 4 opening date, according to Seattle Weekly. It's not too early to get excited for opening day cheesecake samples. [Seattle Weekly]

CAPITOL HILL—Josh Henderson is saying Skillet Diner will likely open at the end of next week, bringing a second brick-and-mortar outpost of a popular food truck to the neighborhood. [EaterWire]

WEST SEATTLE—Thai-focused Bang Bar was shooting for a Wednesday open, but has delayed 'til "later this month," according to West Seattle Herald. [EaterWire]