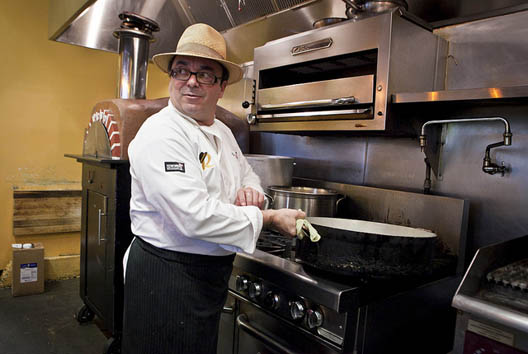 [S. Pratt 04/15/11]
Thierry Rautureau is hardly new to the restaurant game; his flagship fine dining restaurant, Rover's, will turn 25 next year. But opening a new place comes with a learning curve for even the most seasoned of veterans. Luc is marking its first anniversary tonight with a small party at 9:30 p.m. Entrance is $5 and proceeds will go to the American Red Cross's Japan relief. We recently chatted with Rautureau about his first year manning Luc, his more casual, crowded bistro named for his father.

What surprised you about opening Luc? I was picturing people eating in the back, and the front was going to be a lounge area with the bar being just a bar. We opened and ever since the entire place has been a restaurant. People eat everywhere, the counter, the bar, the front, the back—the whole thing is used as a restaurant. I don’t know why but I wasn’t thinking that way. It’s all good, it just came together in a different way.

How was the first year overall? Unbelievable. It’s been way over the expectation. You have a vision for a restaurant, what you dream it’s going to be like and of course nothing happened the way I was visualizing. But I like the fact that I was able to duplicate something that was very much me in terms of me and my wife and the idea of a neighborhood French American bistro.

Any major menu tweaks? Not too many. From the first I said that I don’t want to change the main menu. I wanted to focus on the special of the day but keep the main menu the same I wanted a burger, I wanted boeuf bourguignon, I wanted a sausage that's housemade. We are a neighborhood restaurant with specials every day.

Is there anything you would do differently? We've had a few challenges especially in the design of the kitchen. It's been quite challenging to cook with two ovens and eight burners and one brick oven. I wasn't quite foreseeing that many customers and because of that the kitchen's a little bit underdone. We work a little bit in Rover's kitchen. Some of the stuff gets done over there because there's more space, like sausage stuffing and meat grinding.

What has changed since Steven Ariel [a veteran of Canlis, Café Juanita and Alan Wong's in Honolulu] stepped into the chef de cuisine role last month?
He’s just tweaking here and there, putting his fingerprints on the menu. Especially the specials — he’s doing some really cool stuff. To me that is one place where he can shine. He’s a very very good manager and leader and he’s very calm.

How do you compare the crowds at Luc versus Rover's? The crowds at Luc is more people just coming to get fed in a nice ambiance. It’s a fun place; it’s a noisy place. Rover’s is more a dining restaurant. It's a white tablecloth restaurant and a special occasion place.