Bobcat Thievery, Gnomes, Mysterious Mustaches and Other Tales From the Linda Derschang Empire

Share All sharing options for: Bobcat Thievery, Gnomes, Mysterious Mustaches and Other Tales From the Linda Derschang Empire

Welcome to Shit People Steal, in which we ask restaurateurs what items in their restaurant have been (or are frequently) stolen. 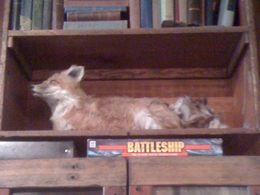 You can't spend 17 years running a network of bars and restaurants (many on rowdy Capitol Hill) without collecting a few good stories. Linda Derschang asked her media maven Tallulah Anderson to gather up some tales of theft, successful and otherwise, and other assorted hijinx from Linda's Tavern, King's Hardware, Oddfellows and Smith. Key takeaway: bolt down any taxidermy you may have on the premises. And if you think someone stole your phone, check with the phone company first. Settle in for a good read:

Many bar patrons love taxidermy; unfortunately sometimes they get a little bold. One time a group of guys tried to steal the bobcat at Linda's. A customer ran up to Hank at the bar and said, "Hey, do you work here? Someone just stole the bobcat." A group of guys had snuck out the back door with the bobcat without the staff noticing! Hank and the doorman chased the men down the street to the War Room. When they realized they were being pursued the guys dropped the bobcat and ran. The bobcat was slightly traumatized but safe for his move to King's Hardware where he currently lives.

However, for every successful thief there is an equally unsuccessful one. This fox (see image), which lives in a box about 10 feet high at King's Hardware, was caught underneath the jacket of a sneaky customer on a weekend night as he was trying to exit the bar. He thought he was pretty funny and just laughed and said, "You got me man!" He was asked not to come back.

We thought someone stole the pay phone at Linda's but it turns out the phone company just came and took it, but we didn't find out until years later.

The garden gnome at Smith has had a very tumultuous life. It appeared on the bar one day. The manager told Linda that one of the cooks had stolen it from someone’s yard the night before and wanted to give it to us. Linda loved it, despite its illegality, and decided to tuck it up with the books, so it could watch over the restaurant as our Good Luck Garden Gnome. About a year later this somewhat difficult young man who had gifted the gnome decided to move on to bigger and better things, and decided he was taking his gnome with him. Despite our disappointment, we parted with our Good Luck Garden Gnome.

However, this was not the end of our gnome’s story. On Smith's anniversary Patric Gabre-Kidan, who had been working with us while he opened the Book Bindery, brought Linda a package. To our surprise, inside was our Good Luck Garden Gnome! A friend of Smith had seen it at the cook’s apartment and wanted to return it to its proper home, waiting until a special occasion to give it back to us. Now and forever more (we hope!) our Good Luck Garden Gnome watches over us from its rightful home above the books.

It seems to even out though because people often leave odd things at our business. We have had a number of mysterious appearances - recently a mustache was attached to a photo in Oddfellows. The photo is really up high so we can't figure out when they were able to attach it. 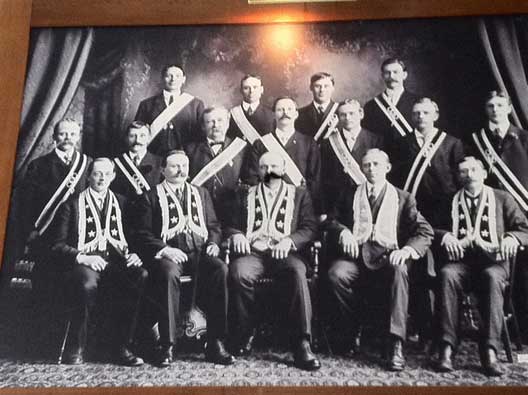