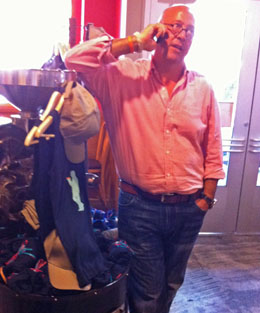 TV personality Andrew Zimmern wrapped up his week in Seattle Friday, taking a red-eye flight back to Minneapolis. The Bizarre Foods host's jam-packed schedule included a shoot at Seattle Coffee Works (where a tipster snapped this photo), and a trip to Taylor Shellfish Farms to harvest and plant geoduck. No surprise, Zimmern said the oddball clam is one of his favorite foods.

The Seattle episode of Bizarre Foods will air early in 2012, and Zimmern promises it will be one of the first two or three episodes of the season. Back in Minneapolis, the good-natured host shared his impressions of his time in Seattle during a phone interview, calling the city "one of those places where I could move there in half a heartbeat."

For a place "with a reputation for being a little bit crunchy, the flipside to that is it’s so deadly earnest and serious,” he said. "The intersection is fascinating."

The TV host cited his visit to Nathan Myhrvold's Intellectual Ventures laboratory (birthplace of Modernist Cuisine), followed by a day at Vashon Island’s Sea Breeze Farm as an example of our varied facets of food culture. Zimmern said Sea Breeze Farm was “one of the truly watershed moments of my food life,” watching “the level of commitment and earnestness” that owners George Page and Kristin Thompson Page bring to celebrating local food. He also raved about Xinh's Clam & Oyster House, the Shelton seafood restaurant run by former Taylor's employee Xinh Dwelley.

The weeklong Seattle stay also included a visit to culinary training program FareStart. Zimmern said the organization's mission alone is "a great food story," but the shoot especially resonated with him because he has a history with alcohol and drug addiction, and spent a period of his life living homeless in New York City.

Zimmern's dinner at Canlis was purely recreational...not that chef Jason Franey wasn't capable of busting out some unusual animal parts or exotic preparations. "We've done stories like that in restaurants like that," says Zimmern. "At a certain point I can't eat another roasted lamb's head on screen."

However he did get a kitchen tour and a history lesson during his visit, and came away impressed with "how they curate a heritage restaurant but at the same time deliver to a new generation" Zimmern followed up his laudatory tweets by calling Franey "one of the greatest young food talents in the country," and said, "I wish we could have figured out a way to include them in the show."

He was similarly taken with Maneki, saying "food is great but food with a story is even better." On the topic of his kimchi rice bowl at Marination Mobile, "I'll put that up against any restaurant."

A Minneapolis resident, Zimmern commiserated about our city’s reputation for gray days. His take: “It doesn't matter what the weather is like; Seattle is fucking brilliant.."