Aleks Dimitrijevic and Tyler Moritz on One Year of La Bete

Share All sharing options for: Aleks Dimitrijevic and Tyler Moritz on One Year of La Bete 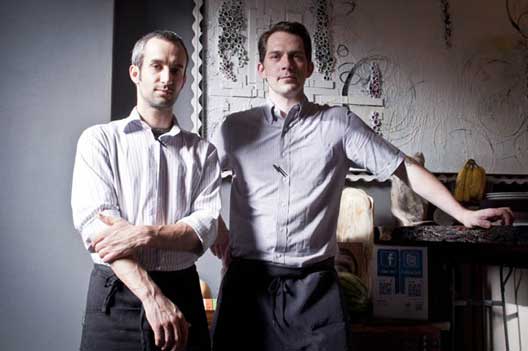 La Bete owners Aleks Dimitrijevic and Tyler Moritz met while working at Ethan Stowell's original restaurant Union and made the rare decision to strike out on their own as co-chefs (and co-owners) of their Capitol Hill restaurant. One year later, their responsibilities have changed but the food really hasn't. Oh, but the guys did finally put a sign up outside. Eater recently spoke with Dimitrijevic and Moritz about brunch, pork rinds and avoiding the "one-year plateau."

What’s the biggest change that's happened since you opened? Tyler Moritz: Now [Aleks] has kind of moved to the front of the house and I'm in the kitchen. Our manager [Dan Rodgers] left and we just decided it would be more beneficial to take that salary and hire another cook instead. Alex Dimitrijevic: When we first opened we were both in the kitchen pretty much nonstop. It didn’t allow for very much flexibility. There are so many other facets of running a restaurant; you have to make some time to get a lit bit of perspective on how things are going, what we can improve on, and what’s going great.

What else has changed? TM: Well we stopped doing brunch a while ago. Instead we opened for Sunday nights. That’s been better for us. AD: We were doing a Friday service, then working all day Saturday ‘til 2 a.m., then coming back here Sunday morning. It was exhausting. Also it’s hard to do a different style of service just those two days of the week. Given the amount of space we have available to prep and store stuff, it made sense to do dinner, keep the consistency, and not worry so much about the quality and timing suffering from the brunch and dinner overlap.

How was the opening in general? TM: It went pretty well considering we got food in basically two days before we opened, and didn’t write the menu until five days before we opened. AD: We’d jotted down ideas all throughout the buildout, but I think we didn’t really finalize the menu ‘til then. TM: I’m almost glad it wasn’t such a huge hyped opening. We didn’t really know what we were going to be yet, or what our identity was going to be. We kind of built that up throughout the year, and built up our clientele throughout the year as well, instead of peaking and then plateauing. You generally get that one-year plateau where everything kind of slows down, but I think we’re actually going the opposite way.

It’s unusual to have a quiet opening like that; this was a high-profile project.TM: It wasn’t a slow opening; we were busy. But I think a lot of other restaurants that opened with bigger name are just packed from day one. You don’t even have time to breathe, to take a step back and say ‘we need to change this’ or ‘this is where we want to go.’

What about the food? TM: The food hasn’t changed that much, but when we opened we had big platters, 40-ounce bone in ribeye, stuff like that. We realized that’s not really going to work; that’s not the people who are coming in here. It’s a neighborhood place.

What else? AD: We never had a sign out front so we finally put a sign in. That was also about having the time; before people would say, ‘where are you guys?’ there was nothing out there to really identify us.

How was the review process? TM: It was all very positive. Once you realize they’re coming in, you kind of expect all of them to come in. You’re kind of looking for them at that point. AD: I’d say we were pretty grateful to everyone who did review us. It definitely exceeded our expectations of what the feedback was.

Did you see more business because of it? TM: Yeah there was definitely a bump.

What would you say is La Bete’s signature? TM: There’s nothing that’s been on since day one?well, except the pork rinds.

And are they staying on there? AD: yeah they’re a good snack. TM: People like them. We still like them. If we stop liking them, we’ll take them off.

What has surprised you this year? TM: Having so little turnover was kind of surprising to me. We’re lucky to have a staff that's been very cohesive. AD: We couldn't have hoped for a better starting staff. Dan was amazing too; he was a great help and I don't think we would have been able to pull off a lot of this without him and his perspective.

What happens next year? TM: More fine-tuning and still trying to improve every day. That’s all you can do at this point is just keep going.