Ethan Stowell On One Year at Staple & Fancy

Share All sharing options for: Ethan Stowell On One Year at Staple & Fancy 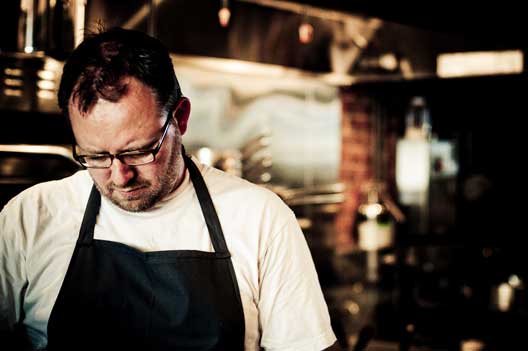 With four restaurants scattered around Seattle neighborhoods, Ethan Stowell is one of the city's more prolific chefs. But since Staple & Fancy opened last August, it's become the place where you're most likely to find Stowell at work in the restaurant's open kitchen (and even after a year it's still mighty busy, especially on weekends). The chef recently shared a few thoughts about running smaller restaurants and sharing space with Renee Erickson's Walrus & the Carpenter. Oh, and he also offered an intriguing little hint about the future of How to Cook a Wolf chef Matt Fortner.

How did you come to open Staple & Fancy in the first place? Originally the guys that were redeveloping the building, Chad [Dale] and Bryce [Phillips], wanted a restaurant to go in the whole left side that’s now Staple & Fancy and Walrus & the Carpenter. They talked to me about taking over the whole thing and I told them no, it was too big. They had talked to Renee about it as well, and she said the same thing; it was just too big of a restaurant. Somehow Renee and I ended up talking about how cool the building was. Then one day we were hanging out at Boat Street and we both talked about the space and how much we like the building. I said, ‘I want the front two-thirds,’ she said ‘I want the back third. Let’s call these guys and see if they want to divvy this up for us.’

I've heard you say you won't do a large restaurant. Small restaurants don't work for everybody. A lot of times in different cities you hear people say you can't make any money in a small restaurant. In Seattle it's just such a risk to open up a restaurant and have 100 or 125 seats. And in my mind those are medium-sized restaurants. People in Seattle are so used to a 30- to 50-seat restaurants. You open an 80-seat place and people say that's huge. Well, not really. Two hundred seats, now that's a big restaurant.

People are sitting at the oyster counter and they see our restaurant with the brick wall. We have people walking to the back to go to the bathroom and they see Walrus and say, ‘what’s that? Let’s go and check that place out next.’ That kind of synergy works. I’m not sure it would work in every situation.

How many people follow your advice and order the tasting? Right now everybody’s doing the tasting. Maybe 80 percent of our tables order it. The only people who don’t are customers who are on a time constraint, or people who just like to do their own orders.

Have you had to tweak or change anything since you opened your doors? Not really; we had to re-work how we kind of organized the fancy menu, just how it functions from a kitchen perspective?nothing more than that. In all honesty not really. It’s been busy; it’s been nice.

You guys are still incredibly busy. Oh yeah. If anybody calls up for the next month to try to get a 7:30 reservation on a Friday or Saturday, that’s not going to happen. Friends have called and said hey, can you get me in? My brother called; I'm like, ‘sorry man.’

Now that Zach Chambers is installed at Anchovies & Olives, will you be back on the line here? I’ve been away but I'm back and was here every day last week. This seems to be how things will probably work. I end up working on the line four or five nights a week. If something happens, say Matt Fortner goes to open his own restaurant or you promote somebody, I go there for a few weeks then go back to Staple & Fancy.

How was the review process? There are a couple that I read, and it seems to go pretty well. The reviews, they just are what they are. You’re not going to adjust anything for it. If someone has a bad experience, hearing about it is going to help you out in the long run, so I guess it’s nice to hear. Some people show up and say you should have it all figured out when you open. There’s just no way you can.

Any other thoughts on this past year? As far as business goes, it's been a good year for a lot of things. Taking this direction rather than being a downtown type of restaurant has helped people understand our company a little better. Our restaurants hang together a bit more. Union was a little bit of a misfit because it's a little more fancy than we are, in a more modern space than our personality dictates now. I think the vision for the restaurant group is a little more clear. I love Union; if it was in a neighborhood, it would still be there.

And in the next year? We’re actually working on a project. It’s more of an idea than a single thing, and I think we will make it work.

How To Cook A Wolf