Share All sharing options for: The Next Mobile Chowdown; Skillet's Hollywood Moment

Let's end this somewhat sunny Monday with an EaterWire dedicated entirely to food truck matters, shall we? 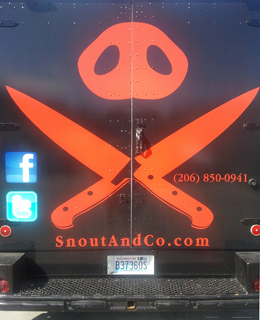 WEST SEATTLE MEALS ON WHEELS—West Seattle Blog has confirmation and more details on the next Mobile Chowdown; the recurring food truck gathering is making its first foray to The Junction on October 2. The attendance list is a mix of old and new: Marination Mobile; Where Ya at Matt; Skillet; Maximus Minimus; Veraci Pizza; Parfait Ice Cream; Lumpia World; Walla Walla truck Andrae’s Kitchen; Raney Brothers BBQ; Street Donuts; Big Food Mobile; Pretzelwagen; Snout & Co. and A Lunch in Hand. This time around the event is all ages and there's no admission fee. [WSB]

MEALS ON WHEELS—Over at Seattlest, Jenise Silva says Skillet maestro Josh Henderson is harkening back to his pre-Airstream days of catering for photo shoots. Except this time Henderson has a new non-Airstream truck, known as Skillet Squared, that will be used for"craft services on photo and film shoots around town." Most recently Skillet Squared was at UW to feed the cast and crew of in-production film 21 and Over. [Seattlest]

BELLTOWN MEALS ON WHEELS—Speaking of craft services, Eater received a few reports of a new food truck in Belltown, courtesy of Giles Catering. Alas, it turns out the truck was also catering for a movie shoot, says owner Beckie Giles, and not able to sell anything to passersby. [EaterWire]

MEALS ON WHEELS—Chris Werner introduces the good people of Seattle to The Frandy Bar, "a truck dedicated solely to frizzled sweets and savories." The Mt. Vernon-based truck has made the round of area festivals this summer, selling fried cakes, candy bars, fried pickles, and even fried peanut butter and jelly sandwiches. The truck's swan song is at Bumbershoot this weekend, but it will resurface in April. [Seattle Met]