Surly Gourmand: Shit I Ate at the Puyallup Fair

Share All sharing options for: Surly Gourmand: Shit I Ate at the Puyallup Fair

Everyone loves the Puyallup Fair! Big country fairs are perhaps the only place left in the USA where you can see oppressed white people. In fact, the entire fair has this strange Eastern European vibe, with all of the strange machinery, weird people, and the aroma of fried dough, mixed awkwardly with the smell of horse shit. If you want to experience all of the fun of a trip to the Balkans without having to rent a weird Soviet-Era car, Do the Puyallup!

Like Eastern Europe, the Puyallup Fair has tons of food, shitloads of it in fact, which they force-feed you like a swarthy babushka with a wart on her nose with hair growing out of it, and she braided the wart hair and added some decorative flair, so that now there's this old woman going around wearing a headscarf with a dream catcher hanging off of her wart. That's what it's like to eat at the Puyallup Fair.

Some of the food is good, some isn't, but all of it is deep fried. In general, everything's overpriced (except for those magnificent scones), but fuck it-- you're a captive audience, so no complaining is allowed, lest you be shipped off to a gulag.

So here's a map of the Puyallup Fair. It's marked with the locations of places I ate. BONUS: Click here for the full interactive map; buildings marked in red have my trademarked pithy remarks associated with them. Meanwhile, here's what I ate. 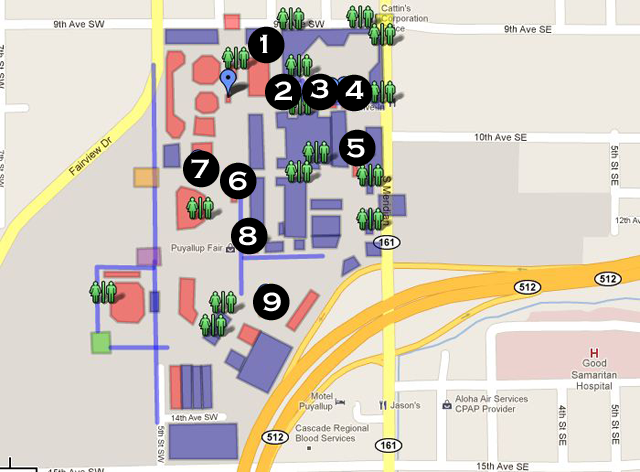 1) Hamburger Myers
This place claims to have "'The Burger' That Made the FAIR Famous," and here I'm reproducing the sign's peculiar typography directly, from the unnecessary quotation marks around "The Burger" to the arbitrary capitalization of "FAIR." Hamburger Myers is well-known for its onion burger. Unfortunately, "The Burger" isn't very different from any number of other onion burgers available at the fair. It's a bit different from any of the others we tried in that it has a SHITLOAD of onions on there, which seem to be mixed with a few pickled goat horn peppers here and there. It's okay, but certainly not impressive enough to be incorrectly ensconced in quotation marks, that's for damn sure.

2) Retro Candy
When people say something is "Rustic" they usually mean "shitty." Similarly, when something is called "Retro" it's usually a synonym for "shitty and ALSO overpriced." Retro Candy fits this bill: for $1.25 per quarter pound (that's $5 per pound for those of you with extra chromosomes) you get your choice of probably 100 different candies, all of them very, very shitty. From Now-N-Laters to Gummy Sea Creatures to those foil-wrapped strawberry candies usually found in a dish in a real estate agent's office, Retro Candy has it all! But this begs the age old question, who wants it all

3) Kaleenka:
Unique amongst the burgers, fries, and other typical crap, Kaleenka sells Polish and Russian food. I was tired of cheeseburgers, so I instead settled for... a beef and cheese piroshky. It tasted like a donut filled with Hamburger Helper. I wanted one of the traditional mashed potato piroshkies but they didn't have it. They don't sell borscht, either, so don't bother asking.

4) Sales Lunch
The Sales Family Lunch Counter opened at the Puyallup Fairgrounds in 1923. They sell typical stuff like burgers and fries, as well as their signature corndog, the Krusty Pup. The hotdog inside the Krusty Pup is juicy and of higher quality than one would expect, covered in a very fluffy batter that's more like a pancake. This is a very good corndog. My only complaint about the Krusty Pup is the skewer, which runs the ENTIRE LENGTH of the Krusty Pup, so you bite into it immediately. I also don't care much for the Krusty Pup's strangely specific $4.15 price tag.

5) Totally Fried
In addition to Deep Fried Rocky Mountain Oysters and a fried chicken sandwich which replaces the bun with a Krispy Kreme donut (a la the infamous Luther Burger), Totally Fried also sells Deep Fried Kool-Aid (which is actually just a ball of batter mixed with Kool-Aid powder and then fried) and, of course, fried butter. Fried butter is gross. For $4.75 you get two balls of fried butter, which are first battered, then fried, then dusted in cinnamon and powdered sugar. The dough is airy and actually quite good, but all the awesome dough in the world can't disguise the fact that you're eating a chunk of butter which is STILL COLD IN THE MIDDLE. At least they used salted butter. USA! USA! USA! When I was a kid I used to want to eat shit like this, but now that I'm a responsible adult, if I'm going to puke I'd rather just get drunk.

6) Snow Cones
A good snow cone is such a treat: a big, soft, lacy ball of finely shaved ice swims in a pool of fruit-flavored syrup. The ice melts when it touches your tongue, and at the end, you're left with a freezing cold puddle of sweet nectar which you can suck down at your leisure. Unfortunately, these snow cones are nothing like this. It's just a pile of shitty granular sleet. Into this sandy mess, they squirt a few meager pumps of syrup which immediately sinks to the bottom of the cup, since the ice doesn't have enough surface area to trap it. In the end it comes across like a cup of watery, cafeteria Kool-Aid with too much ice in it. Lame. AND it costs $3.50, which is an exorbitant price for what's probably 10 cents worth of materials.

8) Fair Scones
By far the single best item that can be purchase at the Puyallup Fair. Fuck the onion burgers, fried crap, candy, and all of that: these simple scones are exquisite. For $1.25 you get a light, warm, pillowy triangle of pastry, split open and buttered, and filled with a thick layer of raspberry jam. This is simplicity itself. If you only get one thing to eat at the fair, get a scone, for fuck's sake.

9) Howard's Hitchin' Post
The onion burger here was, at $6, a bit pricier than its competitors. And it was a pretty typical onion burger, with a thin, well-done patty topped with melted American cheese and a pile of grilled onions, maybe some Thousand Island Dressing or something spread on the bun. This is exactly the kind of burger you would expect to find at a fair. The best thing about this place is that it's adjacent to a beer garden and you can order your onion burger from the back window while enjoying your $7 pint of Coors Light. But hey, at least the beer gardens aren't crowded: after all, no one with kids in tow would be allowed inside.