Renee Erickson and Jeremy Price on Walrus & the Carpenter

Share All sharing options for: Renee Erickson and Jeremy Price on Walrus & the Carpenter 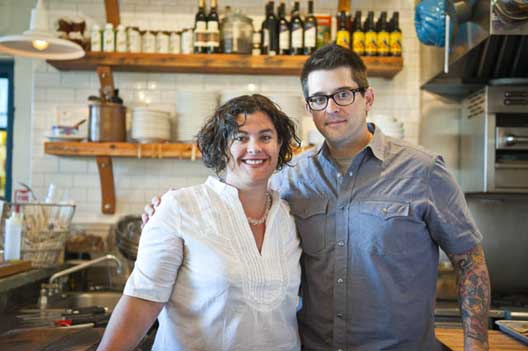 One of the city's most tucked-away restaurants is also one of the first names to get ink when national food media comes to town; recently New York Times writer Frank Bruni raved about his visit to Walrus & the Carpenter, and Bon Appetit's Andrew Knowlton ranked the restaurant third on his list of the year's 10 best new restaurants.

However one year after it opened behind Staple & Fancy in the Kolstrand Building, the Ballard oyster bar remains fiercely beloved by locals, so much so that hourlong waits are common during off-peak hours. Here chef/owner Renee Erickson and manager/owner Jeremy Price recall the post-Bruni feeding frenzy, the elaborate cheese services that might have been, and the restaurant's one truly shitty review.

When you first opened, were you worried about people finding you? Renee Erickson: No, I think Boat Street has always been in a curious location, and being that we’re in Ballard and the building was getting attention for the renovation, I wasn’t worried. Jeremy Price: When Renee and I were designing the restaurant that was a conversation that we had: it’s kind of special that it’s tucked away back here. You’re walking down this long, weird hallway with windows that don’t open up to the outside, and portraits of strange looking people. It’s transportive, in a way.

How was the opening in general? RE: Not quite this busy thankfully. We ended up opening two days before my birthday and I was out of town the week prior for [the International Pinot Noir Festival]. We opened with brunch which was kind of hectic. JP: It was a bridge too far.

I forgot you guys did brunch. RE: For maybe two months, until [chef de cuisine] Eli [Dahlin] and I gave up. It was rough. JP: We weren’t really staffed for it. It was too demanding on everyone to be here until midnight or 1 a.m. on Saturday, then come back at 6 on Sunday morning for brunch. RE: Those were some bleary mornings. JP: Lesson learned.

Has anything else been tweaked or changed? RE: Some basic things. We started without a pass; the servers were going to go in the back to pick up stuff off the table, and that quickly became hysterical. JP: I think we underestimated how busy we were going to be. RE: We had grand ideas of 15 cheeses that servers could talk to you about, and having them cut them and put little condiments with each one. It's a great idea, it's just not possible here.

Did you see a bump after the New York Times piece? RE: It was crazy, it started the Sunday night it hit the newsstand. JP: We’d been in GQ in the winter and we noticed a good-sized bump from that. I was anticipating the same thing, but this was orders of magnitude bigger. There was definitely an adjustment for that. I think that first night we ran out of just about everything on the menu?including bread. RE: And again, I was out of town.

JP: Restaurants are always planning three or so days ahead, or longer, so it’s hard to make those adjustments. We had a really rough three to four days of lag to get up to speed and adjust to volume. RE: With the bread, the bakers need three days to make enough dough; you order bread on Sunday and your increase doesn’t come ‘til Thursday, so we were screwed. We had pre-New York Times bread for four days.

Did you know when Frank Bruni was here? JP: We didn’t know he was doing a piece on us or anything, but yeah, he was recognized. A week or two after he came, a photographer contacted us, but when the article came out even he was surprised by how big the picture was; he was excited as we were.

The praise from Bon Appetit was wonderful, but on some level did that make you nervous? RE: From talking with the staff, I think everyone has built up enough stamina. JP: It's all unexpected in some ways. I don't know what Renee thought, but I thought we were opening some quiet neighborhood place. We wouldn’t have done it if we didn’t think it was going to be successful, but we had no idea.

RE: It’s the same as any restaurant, it’s just accelerated here. At Boat Street we get low on wine glasses; we order more; they show up. But here, we break 30 wine glasses in two weeks, or more than that. There’s this kind of absurdity to it. This space was never designed to handle 225 people a night, which we’re doing now, and I think we’re doing it really well.

Any other highlights from the past year? RE: One of the best parts of this for me has been the expanded awareness of farmers, particularly shellfish farmers. At Boat Street we obviously use shellfish but we don’t buy enough to get it from a lot of places. Obviously here we sell a ton of oysters, so we can really source from a lot of places. You're not begging them to deliver this dinky order. After the Bon Appetit article, the buy we buy the herring from immediately sent me an email; he was just so excited and couldn’t believe they mentioned the herring. It was really sweet.

Usually I ask about the review process, but we’ve already covered that. RE: Well, we did get panned in Seattle Weekly. JP: Yeah, that was a hard one.

Was that [Jason] Sheehan? RE: Yeah. We just got trashed; it was so bad that it was comedy at that point. He just wanted to hate us. When that came out, I remember I was reading it in the Met Market parking lot and thinking, 'I have to call Eli.' I've had many reviews, so I know that nausea that you experience, and I'm better at it. Eli was like, 'I'm going to throw up.' It's just one of those things: you work so hard and want it to be so good, and someone just flat out hates it.

What’s the draw at Walrus? RE: James [Lechner] from Bastille asked me that last night. And I honestly think it's the oysters. There are places on the East Coast, for sure, but in Seattle where all the oysters are from, there's never been a shellfish-focused place. It's mostly steakhouses. I really wanted a place that was about great shellfish, well-priced, in an environment where you could just walk in and have a beer and have it be casual enough that people felt able to go to. Oysters and champagne kind of get relegated to New Year’s Eve, and to me that seemed really sad because these things are fantastic.
You guys have had this very prolonged round of attention. JP: One thing I'm always nervous about is a backlash. A place is cool until it's so cool that it's not cool any more. I don’t think it was ever our ambition to be a top 10 restaurant. RE: Oh god no. We don’t even have a PR person.

But you've had far more national attention than more traditionally high-profile openings, like an RN74. Comparing us to other places, like RN74, is the aspect of food reviewing where for me it falls apart. We aren't trying to be like them, and obviously they aren't trying to be like us, but we all get lumped into the same review pool. JP: I think the way it works sometimes is it mismanages people’s expectations. We see that with Yelp all the time. People come in here that have seen us in the press and they think they're going to have a Canlis-like experience, fine dining. RE: Here you’re going to get bumped into; your purse is going to get knocked off your chair.