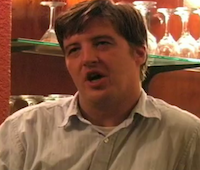 While Jason Sheehan was in town for less than a year as Seattle Weekly's restaurant critic, we still keep tabs on this rolling stone of a food writer(currently in Philadelphia). In today's Gatekeeper post, Eater Denver asked Fruition's Paul Attardi if anyone had offered bribes to jump the reservation line. Attardi recounted an episode from 2007: "The first month we opened up, one of the waiters was offered a bribe by Jason Sheehan, who was writing for Westword. The waiter was having a cigarette, and he didn't realize it was Jason Sheehan, but he was offered $50 for a table." And, he didn't get it. [Eater Denver]
[Photo: J. Tone/Vimeo]