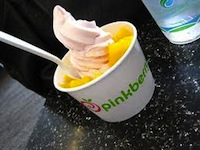 Pinkberry co-founder Young Lee has been arrested for beating a homeless man with a tire iron, says the Los Angeles Times. In June 2011, Lee and a companion were approached by a homeless man for money at a freeway ramp, and the LAPD says that Lee and friend got out of the car, chased down, and beat the homeless man. The LAX Fugitive Task Force arrested Lee at the airport, and bail was assessed at $60k. [LAT]