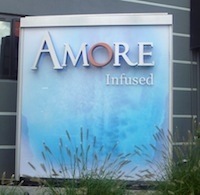 Just before 11 am on Sunday, January 15th, Seattle firefighters responded to a fire at Amore Infused in Belltown. Investigators determined that the cause of the fire was an electrical outlet. The fire caused an estimated $150k in damages to the structure and $150k of damages to the contents. Inside Belltown blog says that Amore's owner Sean Langan needs a kitchen to cater parties: "Langan has roughly five parties his restaurant was hired to cater and he needs a kitchen and supplies to cook the food." [FDNN/seattlepi.com]