Share All sharing options for: Rachel Yang and Seif Chirchi Celebrated With Dumplings 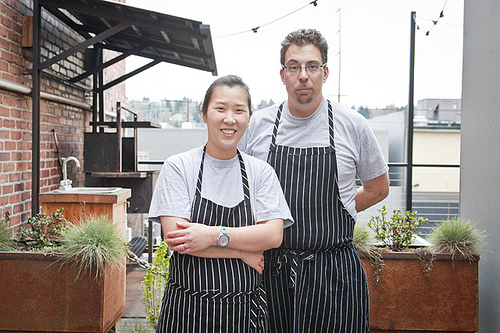 Rachel Yang and Seif Chirchi, the husband and wife owner-chefs of Revel, may have met while cooking at New York's late Alain Ducasse at the Essex House, but it's in Seattle where their collaborative partnership thrives. Since it opened its doors in December 2010, Revel has received unstinting praise for its marriage of French and Korean flavors. The Fremont restaurant recently celebrated its one year anniversary with a dumpling eating contest(in which Chirchi partook), and crowned "Big Mike"(Chirchi lost) the winner, after he finished 17 short rib dumplings in three minutes.

How did this project come together?
Seif and I opened Joule a little over 4 years ago. We love what we
get to create at Joule and we really don't put any boundaries on what we make there. We have really wide spectrum of flavors and wild combination of cuisines. People often think food at Joule is maybe too different from what they are used to. We have been wanting to open a restaurant that are really accessible to everyone.

What was here before?
The space that Revel and Quoin are in right now used to be a catering place. It didn't have any signs or windows to the street.

How was the build out?
It was a great experience. We worked with great architect, Jim Graham from Graham Baba, and general contractor, Dovetail. We really turned the place around to something so beautiful!

What were you thinking about in terms of design?
We wanted people to feel like they are walking into our kitchen. Like so many chefs/owners in the city, we consider the kitchen to be the center of the restaurant. That's where the magic happens and we wanted everyone to be part of it. At Revel, there is no separation between kitchen and dining room. Jim [Graham] had an amazing idea of the big counter that stands across the room that cooks and customers can share. Everyone loves it!

Did you have any delays?
Everything went really well. We didn't get too ambitious with having everything we wanted to open the door. Over the year, we added the deck cover and heating, the grill shack and others.

How was the opening? Did people check it out?
We had really fun soft opening. We opened a week before Christmas of 2010. We invited ton of neighborhood people and had an open house. We had lots of food on our counter that people can grab and sample! The Fremont neighborhood really welcomed Revel!

Did you have to make any changes to the menu after opening?
We have a few favorites on the menu that we have kept, but there are many things on the menu that had changed and evolved. We wanted people to feel like they can come in and get what they already know and love, but also can find new items to try!

What was the impact of Frank Bruni writing about Revel?
People definitely consider NYT to be the ultimate source that they can trust. He didn't only write about Revel on the newspaper, but also appeared on The Best Thing I Ever Ate show of Food Network recommending the dish that he had!

Did brunch take off immediately?
We offer a really eclectic brunch menu. Revel features sweet coffee caramel roll to savory mushroom porridge to housemade ramen. People were really excited to have broad option for brunch. Especially during the summer time, our deck really becomes the center of the "universe" in Fremont.

How was the opening of Revel different than the opening of Joule?
Revel opened with lunch, dinner and shortly after brunch, seven days week. Someone is always there and something's always going on in that place. Opening Revel and operating the restaurant in full speed right away was not easy, but everything went really well.

Future plans?
We have a cooking class series for this year, and we are getting great response from our customers. We're looking forward to summer and reopening the grill shack!