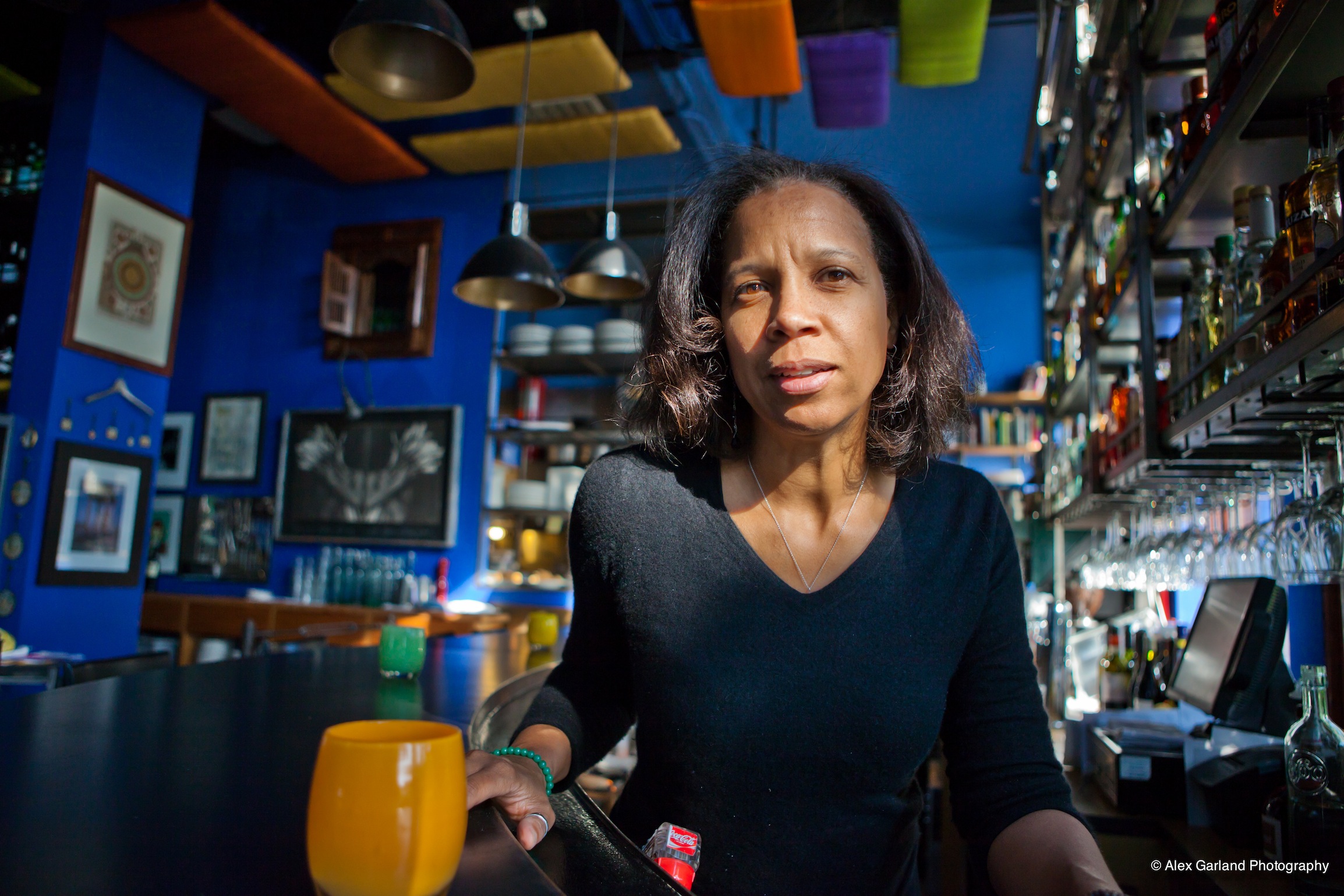 [Photo: Alex Garland / ESEA]
Donna Moodie's Marjorie was an iconic spot in Belltown for five years, but she took her time finding a new space and building out the new Marjorie's, a jewel box on Capitol Hill. Marjorie opened in 2010, and started a mini wave of restaurants situating themselves in the Capitol Hill/Central District border area. She sat down with Eater to discuss her road to success.

Tell us a bit about your background.
I was born in Jamaica and grew up in Chicago, where my mom, Marjorie, was always entertaining. I started working in restaurants to put myself through college, and I've been in Seattle now for 20 years.

The first restaurant I had here was Marco's Supper Club, which Marco Rulff and I opened together on First Avenue in Belltown. Then we opened Lush Life at Second and Battery. When Marco and I split up in 2003, I kept the Lush Life property. I gutted it because I wanted a fresh start and a whole different feeling. That was Marjorie's, which Belltown welcomed until 2008, when the building was sold and became Buckley's Tavern.

Now you're on Capitol Hill, which is full of restaurants, and this corner of 14th and Union is crawling with new places.
When I opened, in May of 2010, there was no one here. I felt like an urban pioneer. But it's been great.

Let's say it's 8 o'clock on Saturday night. How long is the wait for a table?
I feel fortunate that we've got the capacity to absorb walk-ins even when we're full. I'll try to give an honest estimate of the wait time, and keep the newcomers comfortable while they're waiting, We'll give them a cocktail table and a couple of stools, and a glass of Prosecco.

What about celebrity guests?
Celebrities? I don't know that I'd recognize anybody famous, but if I did, I wouldn't treat them any differently. I certainly wouldn't send out any celebrity-sighting tweets.

Your favorite items on the menu?
It's hard to pick a favorite, but the plantain chips are a huge hit. ["Miss Marjorie's Steel Drum Plantain Chips" with pineapple, avocado and tomato, $10 as an appetizer.]

What sort of challenges do you face in this new location?
The biggest challenge we have, I think, is the small space in front, where we have only 30 seats. We have the gorgeous patio, of course, where we can seat 24 people; it's shaded in the summer, and it's heated so that we can still seat guests as it gets cooler. We can seat 10 at the bar.

And then there's your hidden weapon, the so-called Back Room.
Yes, it's formally known as The Annex, which we didn't have when we opened. We took it over last November, and it added another 40 seats. It's part of the Chloe Apartments ground floor, and it has a separate entrance, even though we can also get there through the back of the restaurant. We use it as an elegant private dining room, and it's great for overflow on the weekends. But I think of it as an extension of my home. It has drop-down curtains to make it more intimate; there's a record player back here. But we may not be staffed to have it open every night.

You have a steady clientele of regulars.
Yes, and I want to be sure they're made to feel welcome. I appreciate the cost of dining out.

How are you staffed?
During the week we have a bartender, a server, and a combination busser-host. That's often me. Three cooks in the kitchen and a dishwasher. On busy nights we'll add people on the floor and in the kitchen, obviously. Our chef, Josh Davenport, is the even-tempered person I've ever met in this industry.

How do you run your reservations?
There's the phone, of course. And we take online reservations three ways: OpenTable, UrbanSpoon and our own website.

Does that create conflicts?
It could, but we follow up on every reservation by phone to ask where the guests would like to sit, in the intimate dining room, outside, or in the Annex. Our most important tool is really the graciousness of our staff. Guests tell me they were in for dinner "And it felt like you were there."

You're a big supporter of community organizations.
I've always believed in supporting my neighborhood. The two organizations I champion are Capitol Hill Housing and the Central District Forum for Arts and Ideas.

Do you miss Belltown?
I'd like to say I do, but I don't. It took a lot of work to be there. Employees would be concerned about walking to their cars. I feel that there's a safer infrastructure here on Capitol Hill.

Where do you like to go when you're off-duty?
Well, I have a 13-year-old, so I don't get out that much, but I'm a sucker for the fried chicken at Ma'Ono. Here in the neighborhood, Cafe Presse, Little Uncle and Marco D'Ambrosio's gelato.