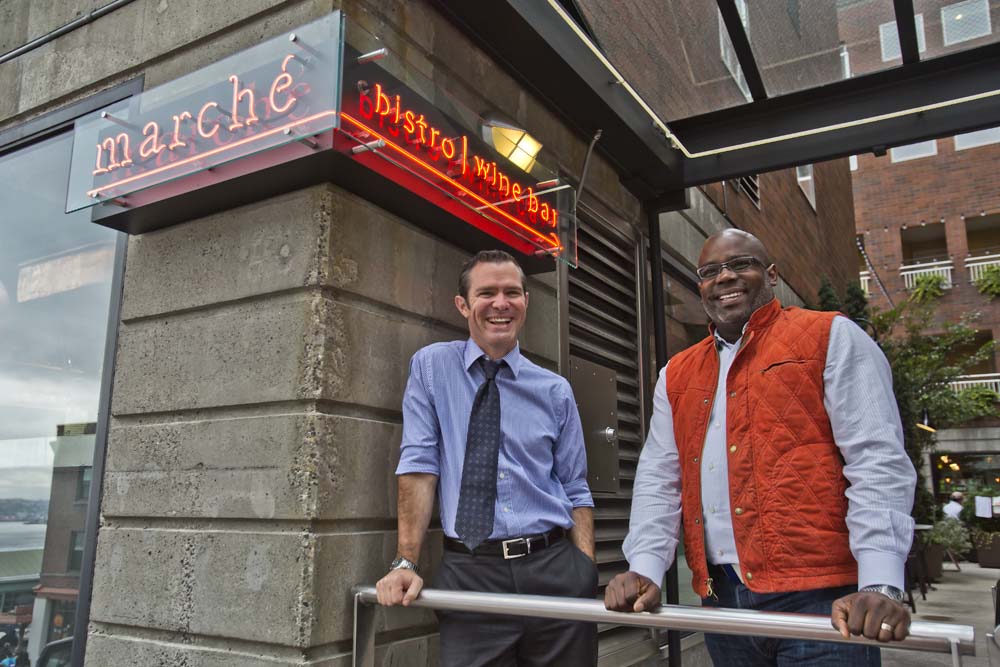 The origins of Marché, a lively spot in the courtyard of the Inn at the Market, go back to a 30-seat Provençal café called Campagne on Capitol Hill owned by Ted Furst and Peter Lewis. They moved Campagne into the Market in the 1980s. Furst left to became a consultant, and Lewis sold out to San Francisco real estate developer Simon Snellgrove in 2005. After a six-month remodel, the premises was renamed Marché Bistro & Wine Bar, and Snellgrove turned the keys over to longtime executive chef, Daisley Gordon and general manager Cameron Williams. Eater sat down with them in the comfortable bar.

Tell us what you were doing before Campagne became Marché.
DG: I was born in Jamaica and raised in Kentucky, then went through the program at the CIA. I started in Seattle at Etta's in March of 1995 and moved over to Campagne very soon thereafter. Tamara Murphy was in the kitchen, she'd just won the James Beard Award (for best chef, Pacific Northwest), Jim Drohman was here, too. Then Tamara opened Brasa, Jim opened Le Pichet, and I moved into the exec chef spot.

You were a contestant on Iron Chef America.
DG: Yes, in the 2009 season. The secret ingredient was berries. I let Bobby Flay win.

Everything was going along just fine, and then?
DG: Simon Snellgrove had bought the restaurant from Peter Lewis. He wanted to retire and he made it possible for me to take over with a fresh start for the restaurant. We had been very country-French; we wanted to be more market-centered, more urban-French.

By then, you'd agreed on Cameron Williams as GM?
CW I'd been at Barrio for four years and I came on board about a month before Marché opened. I'm from Tucson, originally, and I'd spent some time in Europe racing bicycles.

What are the physical changes in the space?
CW Downstairs is pretty much unchanged. (The name is sitll Cafe Campagne) Upstairs, we changed maybe 95 percent of the design and decor. The bar used to have six seats, now it has 12 at the counter, two high-tops, several comfortable wing-back chairs and these lounge-style couches.

DG: There's no wall anymore between the bar and the dining room. No more linens. You can have a drink or a full dinner anywhere in the restaurant.

CW: The bar is now an extremely hospitable place with a steady late-night clientele. It's a neighborhood hangout. Right now, I've got Françoise Hardy on the sound system. Our two bartenders, Tyler Stamon and Travis Ulrich don't have a trace of pretension.

You call your happy hour "l'heure verte"?
DG: The green hour, because of the absinthe drinkers in the Paris cafés in the 19th century. The original happy hour!

How would you compare upstairs and downstairs?
DG: Well, as you know, we used to have these Bastille Day celebrations where upstairs, the formal Campagne dining room was for the aristocracy, and the less formal Cafe Campagne down in the alley was for the people. That's not the case anymore.

CW: We think of the upstairs menu as "playful and urbane," because there's a market at the center of almost every urban space in France. Downstairs is more like a classic French brasserie.

DG: There's a steak-frites at Café Campagne, and there's a Wagyu steak at Marché, for example.

What are some other menu items?
DG: A lot of the menu at Marché comes from my trips to France, to Provence, to Bordeaux. The Bouillabaisse, for example. I was in Marseille, where bouillabaisse originated as a dish the fishermen cooked with the catch they couldn't sell. Nowadays there are restaurants up and down the Mediterranean coast that specialize in it. One place in Marseille called Chez Michel charges 50 euros (about $65) for its bouillabaisse. It's a very elegant and formal service. But ours at Marché is $28.

CW: We try to avoid the fancy and pretentious, but if you want foie gras on your Wagyu steak, or on your salad, we'll shave it onto your plate, tableside, for $10.

DG: It's up to the guest. We want everyone to have a good time.

Where do you like to go "after hours"?
CW: I like ZigZag, Le Pichet and Il Bistro on my own. Or Ten Mercer. The last full meal I had at a restaurant was at Harvest Vine. Lovely.

DG: I don't get a lot of time off, so my wife and I will often just pick up a few things at the farmers market and cook at home. But, sure, I'll drop in at Le Pichet, or have Dim Sum in the ID. I haven't been to Rione yet, but I'll get there.

What are your plans for Marché in the coming year?
CW: We just started donig weekend brunch, 11 to 3:30, with a do-it-yourself mimosa bar.

DG: We're going to stay with our seasonal promotions. So there will be mussels in spring, along with asparagus, and tomatoes in summer and so on. We're right in the Market, and that's our mission. And let's not forget the wine promotions: Beaujolais Nouveau in November and Muscadet in spring, among others.

CW: We have something really genuine here. There are no chain stores at the Pike Place Market. That's unique for a major tourist attraction.

DG: We talk a lot about "genuine." Good food, a great time. It begins and ends there.