Everybody Does Everything at Blind Pig Bistro

Share All sharing options for: Everybody Does Everything at Blind Pig Bistro

Time for another installment of One Year In, which gives Eater readers an opportunity to catch up with last year's hot new chef. This month, it's culinary stalwart Charles Walpole, whose Blind Pig Bistro is celebrating its first anniversary. 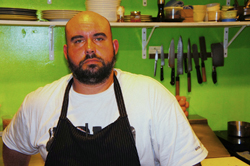 Tell us about your background leading up to Blind Pig. I'm from the New York area and I went to the CIA in Hyde Park. I met my wife in Phoenix, and we moved to Seattle in 1998. I worked for Monique Barbeau at Fullers, which is where I met William Belickis. When he opened Mistral I was his chef de cuisine for four years. Then I moved into the Ethan Stowell empire, but now I'm partners with Rene Gutierrez, who ran the dining room when I was in the kitchen at Mistral. Rene was also the GM at Tavolata for a while, and at Marjorie.

How did you end up in this strip mall on Eastlake? It's a historic restaurant spot, you know. This was the original Sitka & Spruce. Then it was Nettletown. I happened to be at the Ballard Market one day and Jeremy Farber (of Foraged and Found) told me that Christina (Choi) wanted to sell. Rene and I had been thinking about a full build-out kind of place, but we both fell in love with the space.

Why call it Blind Pig? A century before Prohibition, there were low-class joints that would get around a ban on selling alcohol by putting on some sort of show, like pretending to exhibit farm animals. You'd buy a ticket, they'd give you a complimentary drink, and they'd bring out something like a blind pig. Point being, these were illegal, very informal drinking establishments.

An informal menu? I found the focus and exclusivity of Mistral's menu too narrow. We're in a funky strip mall next to a Teriyaki shop and a Subway, We're cooking at a very high level, but we have no pretentions.

What's your most popular dish? Our menu changes constantly, so there aren't any so-called signature dishes. We've got a popular Mad Hatcher chicken, which is soaked in buttermilk & spices for a few days. And there's a dish we always have on the menu, a steak with a charred eggplant puree. The cut of steak varies, sometimes bavette, sometimes skirt, but the eggplant is always the same, blended with spices, balsamic and honey.

Another thing we do is to sell the whole menu. Everything that's on the blackboard. It's a good deal for a party of four; you can share everything and we price it at ten percent off.

The happy hour is called Atelier? That's right, Sunday through Thursday from 5 to 6. Five-dollar plates.

Reservations? We just started taking reservations for parties of six or more, and only at certain times, at the start or the end of the evening.

The blackboard includes a $5 item called Kitchen Booze. What's that? Hah! We heard about a place in Chicago that lets a guest buy a sixpack for the kitchen. (Coterie Room does it here in Seattle, too--Ed.) So it's like that, a contribution to the kitchen's drinking fund. But sometimes we'll come out and have a toast with the table.

What kind of advertising or promotion do you do? We've done zero paid advertising since we opened. It's word-of-mouth and repeat customers.

What plans do you have for the year ahead?
I've done some renovations, adding a counter and a communal table for single diners.

How are you staffed? As you can see, it's not a big restaurant. We've got 22 seats, and we run with two in the kitchen and two on the floor. On busy weekends, we add a host. What makes it work is that we're a team. Some nights, Rene works in the kitchen; he's also a chef, you know. Some nights, the cook might come out and serve. Some nights I sweep up or take out the garbage. Everybody does everything.
· All One Year In Interviews [~ESEA~]
· All Coverage of Charles Walpole [~ESEA~]
[Photo by Ronald Holden]