Top Chef Seattle: Episode One (Not Yet in Seattle)

Share All sharing options for: Top Chef Seattle: Episode One (Not Yet in Seattle)

Top Chef is back with a new season, set in our very own city: Seattle! Twenty-one eager cheftestapants will be competing on the rainy streets of Seattle for the prestigious title of Top Chef, but you'll have to cook a mean alder-smoked salmon if you want to impress Tom Douglas's beard. Who will win the challenge and become the next culinary Kurt Cobain? Stay tuned to find out! I'm a very famous food writer and I'll guide you through each episode of Top Chef Seattle. But there's a lot of ground to cover so let's get started quickly.

The cheftestapants begin the journey not in Seattle, but in the restaurants of four culinary masters: Tom Colicchio, Hugh Acheson, Emeril Lagasse, and Wolfgang Puck. The wheat is briskly separated from the chaff, as the cheftestapants battle to impress the judges and thus earn a coveted Top Chef jacket and a spot in Seattle. Colicchio explains to his group of cheftestapants that they're going to be working an actual dinner service alongside the kitchen staff at his swank Los Angeles eatery Craft.

Emeril, in turn, challenges his group of cheftestapants to prepare a good soup. Stephanie's cauliflower soup with corn, peas, and lobster knuckles with pea tendrils is light tasting, but apparently the cauliflower flavor is so faint that Emeril has no choice but to send her home. In Stephanie's defense, however, focus groups indicate that consumers prefer a cauliflower soup that tastes like bacon cheeseburgers, so you can't be too hard on her. Tina's shellfish and chorizo soup is too garlicky and is also as generically "Mediterranean" as a pizza place that also sells gyros, so she too gets the boot.

Legendary airport breakfast pizza purveyor Wolfgang Puck leads his cheftestants in a quest for a perfectly cooked omelet. Apparently the best omelet is made from Faberge Eggs. As a young apprentice Wolfgang Puck had to throw away over 80 subpar omelets before he acquired this priceless knowledge. He judges the cheftestapants using his superior palate and decides that Daniel's mushroom and shallot omelet with oyster, bacon, and pea salad was tasty, but poorly presented. Says Puck, "If I could eat it in the dark and not see it I would like it." I once said something similar to your mom. Daniel goes home.

Southern food expert Hugh Acheson hosts the guests at his restaurant Empire State South in Atlanta. Acheson orders the cheftestapants to create a salad, burdening them with the knowledge that he can actually send ALL of them to Seattle, but only if they meet his impeccable standards of excellence. Thus, in theory at least, Acheson could eliminate the entire group in a culinary reenactment of the Lizzie Borden Murders. Gina, in an attempt to sway Acheson's opinion of her grilled zucchini, carrots, and pea sprout salad with a balsamic vinegar reduction, describes the dish as "delicious," but Acheson
begs to differ, and Gina is returned home. I thought perhaps the balsamic reduction was too tired of an ingredient for Acheson's taste but no: a salad with kale chips actually makes the cut, so innovation was obviously not a deciding factor. 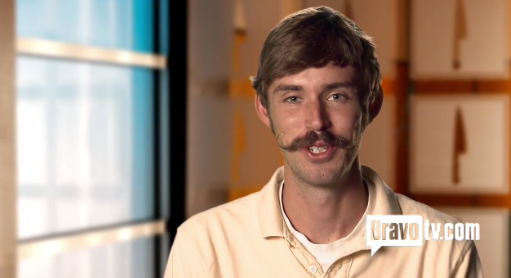 The action comes full circle at Craft, where Colicchio corners Jorel, a guy with a waxed mustache that would look as much at home adorning the lip of a grizzled 1830's gold prospector as it would on a modern mixologist. Due to an overly salty beurre monte, which is probably as salty as the language he uses when panning for gold, Jorel is sent home. And despite Anthony's acceptable hamachi dish, Colicchio surmises that size does, in fact, matter, and he is told to pack his tiny paring knife and leave.

The new season of Top Chef promises to be a wonderful wonderland of wondrous wonders, filled with the unique cuisine and beautiful natural scenery and hipsters of Seattle. Unfortunately, I just violated the Godwin's Law of calling people hipsters, so I have to go now. Plus I'm tired of typing "cheftestapants." Check back in next Thursday, right here on Eater Seattle, where I'll provide a literary Tivo of next week's episode of Top Chef for your reading or viewing pleasure or whatever.