Share All sharing options for: Mike Easton Toured With PUSA and 20 Other Facts About Il Corvo and Its Owner

He's putting the finishing touches on the new Il Corvo just in time for his nearly sold-out New Year's Eve dinners (you have a better shot of booking the second seating), but the affable Mike Easton still found time to sit down with Eater Seattle for a cup of joe a short tour.

The larger, but still small-ish space is noticeably much warmer than the old Il Corvo, where it wasn't so much Easton's aesthetic as it was his Procopio Gelato landlord's. Most of the decor at the new Pioneer Square spot (formerly BuiltBurger) is salvaged and straight-up used. Here are some other facts about Easton's new restaurant and himself, as well as some snapshots. May iPhone photo apps bless us all this holiday season. 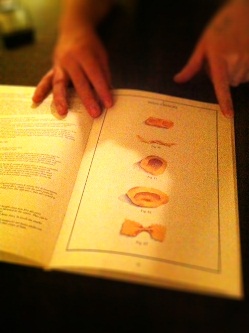 · The benches are old church pews from the Marcus Whitman Presbyterian Church.

· His collection of pasta tools is half antique mall finds and half drunken eBaying.

· The light fixtures are from Built Burger. So are the tables and chairs.

· He's going to blow up photos from a limited-edition pasta encyclopedia and use them as art.

· He left home when he was 15 and got his first job washing dishes and chopping vegetables at 16.

· He has a bass clef tattoo on his hand.

· He moved to Seattle to work in the music industry as a recording engineer. 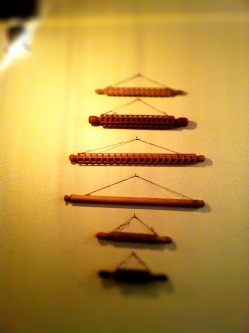 · He toured with PUSA (Presidents of the United States of America) and helped engineer their album with Sir Mix-A-Lot.

· He was a house engineer for a record label for two years before he quit.

· Jack Kelly, owner of Cafe Ladro (where Easton briefly worked as a baker), convinced Easton to take over Bizzarro Italian Cafe with him in 2004.

· Guy Fieri taped an episode of Diners, Drive-Ins and Dives at Bizzarro right when Easton sold the place in 2008. All of his food was used in the show, but to his dismay and utter frustration, he was not.

· Armandino Batali convinced Mike to take his inaugural trip to Italy (Tuscany) during his first year at Bizzarro.

· Armandino was a regular at the original Il Corvo. Easton has never met Mario.

· Underneath the marble-topped table are the words Il Corvo—specifically for people sitting down across to see.

· Pasta machines perched on the shelf next to the door are circa 1906 and some of the very first made in America. 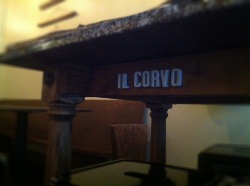 · Easton uses the same era machines to make the cavatelli.

· He uses flour from a small agricultural co-op in Italy that incorporates ancient grains. He goes through about 20-lbs a day of the stuff.

· The guy who owns Autosport in Ballard (high-end custom engine work) does all of the repair work on Easton's pasta machines.

· All Coverage of Mike Easton [~ESEA~]