Share All sharing options for: Expert Panel on Best New Restaurants of 2012

As is the tradition at Eater, our closeout of the year is a survey of friends, industry types, bloggers, and readers. We've already covered Best Standbys. Now it's time for Best Newcomers. Again, check back. We have some more writers/experts/all-around groovy people giving us their picks shortly! 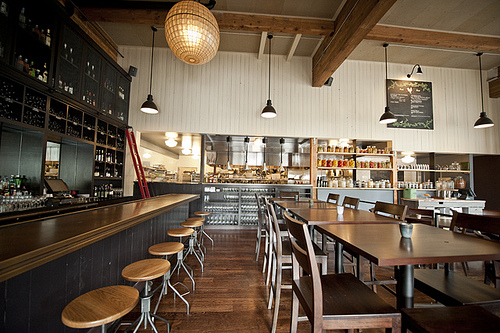 Q: What are the top restaurant newcomers of 2012?

Leslie Kelly, contributor, Seattle Magazine: Rione XIII is wonderful, though I'm not exactly objective because my daughter works there. Still, every dish coming out of chef Brandon Kirksey's kitchen is so satisfying, especially the incredible antipasti. And it's not new, but it's new to me! I finally went to Uneeda Burger and was totally blown away by this chocolate salted caramel shake. Darn near made me weep. Dying to try Mamnoon and Shanik...soon!

Erin Thomas, editor, SIP NW: Digging the reinvented Joule for its spicy shrimp (although I miss its whole fried chicken and gravy) and its neighbor The Whale Wins for making veggies cool. Blind Pig is adorned with media affection but deserves more patronage than it gets for its killer pork menu. Bitteroot's proving that the white people in Seattle really can do barbeque and I admire that drive.

Hanna Raskin, restaurant critic, Seattle Weekly: Last excuse, I promise, but being a critic puts me two months behind every other eater in town. It's still too early for me to visit The Whale Wins, Shanik and Mamnoon, for example. But on the critics' November-November calendar, I'd nominate Blind Pig Bistro, May Kitchen + Bar and Off the Rez as my favorite additions to the local dining scene. Cocktail-wise, I'm fond of Vessel and Rumba. And even though I won't stop squawking about it, I'm not sure how many Seattleites have caught on to the loveliness of a patio lunch at Collections Cafe.

Allecia Vermillion, food & drink editor, Seattle Metropolitan: Wandering Goose is damn adorable, and who remembers what life was even like before Crumble & Flake opened? Everyone is going to say The Whale Wins (and rightfully so) so I humbly submit Cafe Munir and Fonda la Catrina.

Jennifer Worick, author, Things I Want to Punch in the Face: I can't think of any newbie restaurants that I swooned over this year.

Surly Gourmand, writer/curmudgeon: While it's not technically a newcomer, the Capitol Hill incarnation of Restaurant Zoe is very nice.

Linda Miller Nicholson, Salty Seattle: Mamnoon, but throw your staid Indian expectations out the window before you go. Shabu Chic. Use the provided sauces to doctor your broth, and ask for capsaicin oil to spice things up. Get the wagyu beef, it's sliced a la minute and of excellent quality. UPDATE: In a copy-paste mishap, Ms. Nicholson meant to send Shanik as her answer, not Mamnoon. So to all of you who commented that the latter isn't an Indian restaurant, you are correct! Your Shanik gift certificates are in the mail.

Julien Perry, editor, Eater Seattle: Rione XIII for the casual elegant ambiance (and great staff); LloydMartin has some of the best food I've had in ages and their Social Hour is a downright steal; Ma'Ono Fried Chicken & Whisky (aka The Old Spring Hill) because it's in my neighborhood, the owners are incredibly hospitable, and the place has a certain energy to it that can put even the most forlorn diner in a great mood; and even though I've only been once, I am quickly falling in love with Linda Derschang's Bait Shop, and not just because they have a blended drink machine and Dark & Stormy on tap (okay, that's pretty much the reason).

Scott Heimendinger, director of applied research, Modernist Cuisine: I feel like a hermit for not having tried more new places in 2012, but Bitterroot stands out to me as a new joint with a lot of potential. They had me "buffalo fried chicken livers".