In an odd turn of events, reality star and former girl band member Aubrey O'Day was at Munchbar on Christmas Eve when someone started shooting. She tweeted: 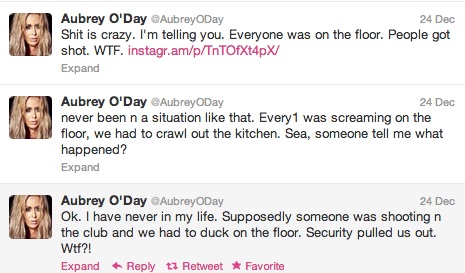 One person died in that shooting, but O'Day made it out safe and, if the tweet she sent out later that same evening is taken at face value, she wasn't that shaken up over it:

Update: An earlier version of this post had a different headline that may not have reflected the seriousness of the event in question.
·More Moveable Tweets [~ESEA~]
·Munchbar [Official Site]