Remembering the Best Meals of 2012

Share All sharing options for: Remembering the Best Meals of 2012

Our guest panel is back to reflect on 2012. We've already covered Best Standbys, Top Newcomers, 2012 in a Word, Best Dining Neighborhood, and Biggest Dining Surprise of 2012. Now, it's time to take a seat in the time machine and reflect on the Single Best Meals of the year. What was yours? 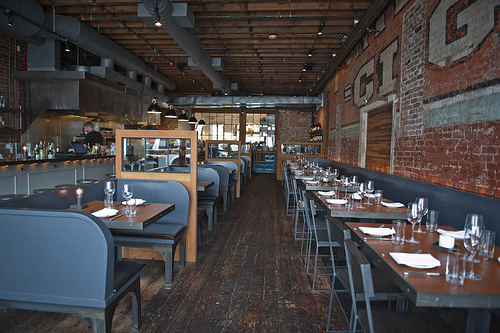 Kathleen Flinn, author, The Sharper Your Knife, the Less You Cry: Hmmm. In Seattle, a toss-up between a perfect miso-marinated black cod at Poppy as we celebrated selling my third book and a huge plate of fried chicken with biscuits at the Kingfish Café on a cold, rainy night when I was desperate for comfort food. For me, it's not about being upscale but being what the universe delivers along with the dish.

Allecia Vermillion, food & drink editor, Seattle Metropolitan: A dinner at La Bete in July, we just walked in and told our server how much we wanted to spend. She and the kitchen really calculated how to give us the most bang for our buck, and we ended up with some incredible dishes—like a pork chop—that I never would have ordered on my own. And technically it was my husband's meal, but I can't stop thinking about the omu-soba we had at 4649, the restaurant that opened in the former Joule space.

Leslie Kelly, contributor, Seattle Magazine: One of the Planes, Trains and Traveling Chefs dinners at Matt's in the Market in June when Chet Gerl collaborated with Portland's Gabe Rucker from Le Pigeon and Little Bird. It was one perfect course after another, with the care, love and passion so coming through on those plates. I never wanted that night to end.

Surly Gourmand, writer/curmudgeon: Sadly, my favorite meal of 2012 wasn't in Seattle at all. Those of you who regularly make the jaunt down to the Rose City know that Portland's food scene is crazier than Seattle's: more daring, more diverse, more technique-driven. The best thing I ate in 2012 came from Portland's Boke Bowl. Yeah, yeah, I know, I know, it's a ramen house for kids, but they make EVERYTHING from scratch. Not just the noodles, mind you; even the table sauces are made in-house, including an imitation Sri Racha that zings as brightly as a putdown from the Algonquin Round Table. The salads are exquisite and the fried chicken is the best I've ever tasted: the crust shatters in your mouth to reveal meat that's as juicy as the panties at a Michael Buble concert. Best of all, Boke Bowl's boutique fried chicken comes with the proletarian price tag of $4.

Hanna Raskin, restaurant critic, Seattle Weekly: Pasta and a glass of wine at Il Corvo after any miserable morning.

Jennifer Worick, author, Things I Want to Punch in the Face: 4-course family-style supper at Staple & Fancy. The braised pork shank entrée and fried oyster app were so sublime that they made me angry with delight. Any night at Revel is a close second.

Erin Thomas, editor, SIP NW: That's a mean question to ask!!! I hate to say it because there's been a ton of ink thrown at them, it ain't cheap and now I want it again, but Altura. An all-around, disgustingly delicious and sybaritic dining experience plated up by a young, traditional yet innovative chef.

Linda Miller Nicholson, Salty Seattle: The tasting menu and entire evening experience at Inn at Langley. Matt Costello's food is innovative and modern while still managing to be comfortable. It's a testament to his expertise as a chef that he is able to utilize haute techniques in such a disarming and totally delicious manner.

Scott Heimendinger, director of applied research, Modernist Cuisine: Alinea, in Chicago. It was easily the most decadent, mind-blowing, epic (as in The Odyssey) meal I've ever eaten. Plus, it was a meal shared with great friends. French Laundry was a close second. Needless to say, this was a good eating year for me.

Julien Perry, editor, Eater Seattle: I honestly don't remember. Two meals that stick out in my mind include the 9-course tasting menu at Rover's, but I think that was 2011. And then I was impressed and completely satisfied with the chef's tasting menu at Staple & Fancy where the dishes never seemed to stop coming out of the kitchen. Again, I think that was last year. So, for honesty's sake, I'm going to say my most memorable meal of 2012 was the time I went to the Jimgerman Bar near Walla Walla (Waitsburg) and had one of just about everything on the menu, including the famous schnitzel, which was only slightly outdone by (chef/co-owner) Claire Johnston's savory shortbread cookies. I ate a dozen of them.