Share All sharing options for: McCracken & Tough Hit Their Stride With Coterie 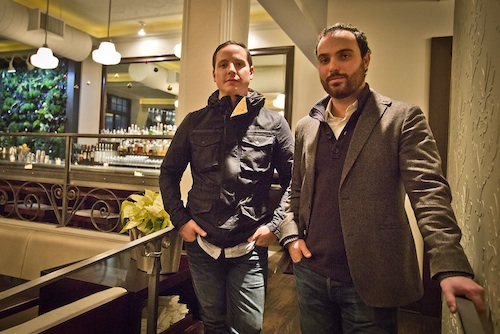 Four-and-a-half years ago, friends Dana Tough and Brian McCracken stopped working for other people, joined forces, and opened Spur—Seattle's answer to a sexy saloon-esque gastropub. They've been busy ever since. Throw in a Capitol Hill bar (Tavern Law), another Belltown restaurant (The Coterie Room) and a fourth venture on the way (The Old Sage), and you have two young guys who have hit their stride with a keen ability to know just when and where to tweak their business plan in order to continue thriving. Their newest restaurant, The Coterie Room, celebrated its first anniversary in September. How are the guys doing One Year In?

How has your life changed this past year?

DT: Work has become a little more difficult. There's a lot more people to manage. It's definitely a jump from two to three [businesses]; it feels like three-and-a-half businesses.
BM: The work life is what's changed a lot. We're in a transition period where we're trying to get to a point of having a company that is running all of our restaurants rather than individual places that we run ourselves. We're in that growth period where we're going to have some corporate employees once we get the fourth [business] up. It's going to make our jobs a little bit easier. We'll wear less hats.

What has this place done for your social life?

DT: I think we both have time to go out and do things. I've found more recently that I like to spend quality time at home a little bit more. Like Brian said, we are focusing on forming McCracken-Tough headquarters, so to speak, where it'll be easier to get all of the key players together every day. We've acted as directors of operation for the last four years, and we want to put that responsible on a couple of other people so that we can grow and focus on staying relevant, which is a full-time job.

What's changed in The Coterie Room since you opened?

DT: Recently, we changed the menu. We pared it down a little bit. When we opened up, I think we tried to cater to too many people, which resulted in a slightly oversized menu, which has proved to be successful at our other places. So, we decided to dumb the menu down a little bit and also offer a very affordable three-course tasting menu, which people aren't intimidated by.
BM: Every place that we have, they all have their own identity, their own personality, and they change quite a bit throughout a year. From how we structure our staff to the menu we put out to seating charts to everything, they all adjust and change. In that year, year-and-a-half range, we always sit down and have a big meeting on what we need to change for the place, now that we've settled in and its become what it's going to be. What can we change to better accommodate what it is versus what we thought it was going to be.
DT: Something we should touch base on is that we recently promoted Erik Jackson as chef de cuisine. He's been with us since day one. He was with us at Spur in the first year, then took some daytime work with Tom Douglas after he had a kid. He's proved to be trustworthy and has really blossomed into a good cook. 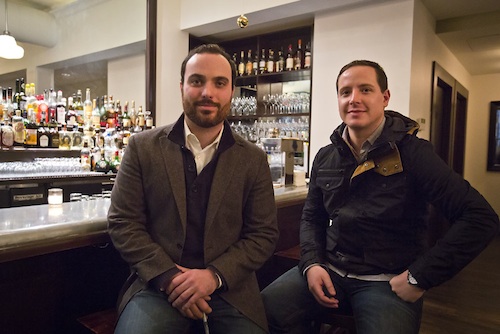 Is there anything that you had to get rid of that was a little crushing to you?

DT: Something that we never opened with on day one that crushed us both, but in hindsight would have been a lot of work for us is a chef's counter. We had big dreams and big ideas but we just kind of ran out of square footage in the kitchen. But again, to have us cooking that five days a week and not focusing on our other businesses would have been hindering. So, that's okay.

DT: Ham cracklins, poutine. The foie gras torchon is sort of a cult following dish.
BM: The fried chicken has been pretty popular.

Any dish a surprising hit?

What are you planning for The Coterie Room in 2013?

BM: Well, we have some curtains on the way. We're going to try out a little lounge seating area (near the kitchen) with some sofas.
DT: And maybe a bookcase or something behind...I don't know.
BM: Maybe something.

What made you decide to get curtains?

BM: Sound.
DT: That's been the biggest complaint.
BM: When it's busy, it's loud in here.

DT: We make mistakes all the time, but if you learn from them, there's no regrets.
BM: Every mistake that we've ever made and every good idea we've ever had, we've learned from. If you don't allow yourself to learn from it and absorb it, then that's where you're going to make more mistakes. I think that we're really becoming, every day, better at what we do. So, absolutely, we've taken this year end as a great way to move forward.