The guys behind Bellevue Brewing Company are gearing up for their grand opening, nearly three months shy of their estimated date.

John Robertson, a commercial real estate pro, is teaming up with the head brewer from Olympia's Fish Brewing Company to open BBC near the Coca-Cola plant on 130th Ave. N.E.

"I've gone on record before saying Bellevue is a beer wasteland and I think we're going to put a big dent in that," says Robertson. "My expectation is that Bellevue, as it continues to grow and transportation becomes more of an issue, is going to start demanding the things that it has typically gone to Seattle to enjoy."

Robertson says the hold-up has been getting an electrical and fire inspection, as well as their temporary certificate of occupancy. "We're looking to have an open house December 13-19 and the grand opening December 20-24."

"We've got some friends who have opened up breweries lately and their advice was, 'Take whatever you've got on Facebook and triple it and that's what you're going to see during your grand opening. It'll be an absolute madhouse!' We've got almost 1,800 fans, so it's a little terrifying to imagine close to 6,000 people ascending on a place with an occupancy of 316."

Rick Lowell will be the executive chef.

"He's worked at Daniel's and through many of the other Schwartz Bros. entities. He was also the executive chef for Bill and Melinda Gates for about five years."

There will be a full menu that includes pizzas, soups, chilis, chowders and hot sandwiches.

As for future plans: "There's a very large development plan for the Safeway cold storage site that is right across the street from the Coca-Cola plant. It's called the Spring District, and that's actually where we're going in with location number two in 18-24 months." 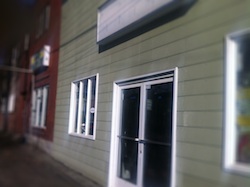 Back in Seattle, the team behind Spinnaker Bay Brewing is on track for a Spring opening.

"Construction is going well. We are waiting for our licencing and equipment to arrive while painting and setting up equipment as it arrives. We expect to start brewing in February and open by March 1st," says brewer and co-owner Janet Spindler.