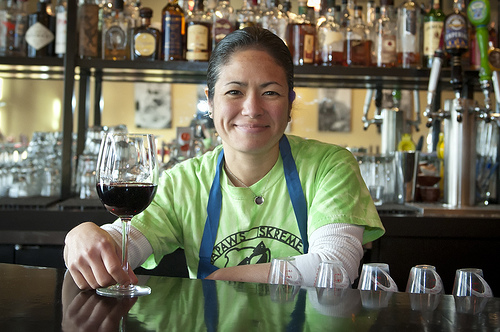 [Photo: S. Pratt]Winner of the 2009 James Beard Award for Best Chef Northwest, Maria Hines began establishing her locavore reputation at W hotel's Earth & Ocean back in 2003. In 2005, she was named one of Food & Wine Magazine’s 10 Best New Chefs. Maria opened Tilth in 2006, and in 2008, the New York Times' Frank Bruni named Tilth one of the top ten best new restaurants in the country. One year ago, Hines opened her second restaurant, a Mediterranean bistro named Golden Beetle(named after a Moroccan spice blend). Like Tilth, Golden Beetle is certified organic.

How did this project(Golden Beetle) come together?
I came up with the concept over a cup of coffee, by myself at home, in about 2 hours.

What was here before?
Via Verde Pizza

How was the build out?
It was a turn key, so I had it open in 4 weeks.

What were you thinking about in terms of design?
I wanted it to have the feeling of the Mediterranean (photos, Turkish lanterns) while also having a feeling of a neighborhood casual joint.

How was the opening? Did people check it out?
Smoothest opening I've ever been a part of. People came to check it out and they are still finding out about us.

Did you have to make any changes to the menu after opening?
We lowered the price point by a couple of bucks so more people could enjoy the restaurant. In the kitchen, we have enjoyed the continued exploration of the Mediterranean, including dishes from Morocco, Turkey and Greece. We changed a few items on the menu every month, but some of the original items are still guest favorites including the Lamb Kibbeh Meatballs, Spanakopita and Flat Bread with tzatziki, muhammara and hummus dips. Since the opening we also added a weekend brunch as well as a nightly happy hour with beer, wine, a cocktail special and $4 food.

How was the opening of Golden Beetle different than the opening of Tilth?
It was easier because I had a pro management team that had already worked with me for a few years at Tilth.

Are there any differences between the customers for Tilth/Golden Beetle? Differences in the neighborhoods?
Golden Beetle has a younger demographic and the Ballard neighborhood seems to stay out a bit later.
For more One Year In posts published today across the Eater Universe, head over to Eater National.
¸ All One Year In Coverage on Eater Seattle [-ESEA-]
¸ All Golden Beetle Coverage on Eater Seattle [-ESEA-]