Welcome to another edition of The TasteMakers, where we search the city to highlight Seattle’s innovative bakers, bartenders, cooks, and other restaurant professionals. Today, we interview Zig Zag bartender Benjamin Perri. We asked Perri about working at the celebrated Pike Place Market bar and his favorite haunts in Seattle. 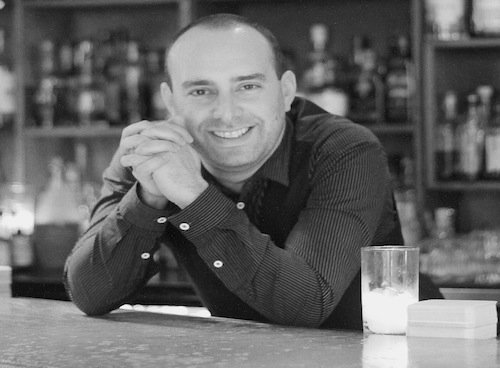 Where else in Seattle have you worked?
During my first two years in Seattle, I was the bar manager at the Showbox SODO. Then I moved to Knee High Stocking Company on Capitol Hill. The place really gave me an introduction to making cocktails because I had never made them before. Before then, I was just a slinger of drinks. I was making quick vodka sodas and shaking martinis and getting them out as fast as I possible could. Knee High gave me a real understanding of hospitality and how to keep your patrons entertained and how to make a drink properly. It was a good jumping off point to come here.

What drew you to work here at the Zig Zag?
I was impressed with the way that Zig Zag treated their patrons. Hospitality is one of the lost arts in this business, and they treated every single person at their bar with the respect that they not only deserved, but required. That was the biggest lesson I've learned here.

What’s the clientele like? Tourists? Regulars?
A good mix of industry, a good mix of everything. We have a ton of regulars that have been with us since day one, and a lot of tourists are sent here from other restaurants and concierges around town. It’s a wonderful place, and it’s one of the only few places in this city that I’ve seen where no matter who you are or what you do, if you sit down at this bar, you’re talking to the person next to you.

Favorite drink to make? Least favorite?
That’s always a tough question. It’s always nice for me to make a classic Old Fashioned. I love the way it’s built and how classically American it is; it’s the epitome of what a cocktail should be. It’s rarely done right, but when it is, it’s a thing of beauty. I don’t have a least favorite drink to make. It’s all about what [the patrons] want, and if it’s going to make them happy, that’s great for me.

Where do you like to eat in Seattle?
The place I frequent the most is Tilikum Place Café. The food that [chef/owner] Ba [Culbert] makes may not be the most beautiful or most intricate compared to other places in the city, but it’s easily—and consistently—the best tasting. Bisato is another place I love to death. Scott Carsberg is an amazing man and an amazing chef. Everything he puts out is original, delicious, and beautiful to look at. Pho Viet Anh is my favorite place for pho. Their broth is top notch: it’s not too sweet; it’s not too acidic. It’s just perfect.

For drinking, I usually go up to Sun Liquor Distillery. Erik Chapman is a great person; the people there are really friendly, and they do a really good job all around.

Most interesting patron you’ve had at your bar?

There is an airline pilot that’s been a regular of Murray [Stenson], our old colleague, who came in whenever he was in town. He has the most infectious laugh and smile I’ve ever seen in my entire life, and he just brightens everyone’s day. He still comes in even though Murray’s not here anymore, and we love him to death. My whole family could have just died in a fiery plane crash, but if he walks through the door, I’ll be happy.

Speaking of Murray Stenson, how was it working with him?
I worked with Murray for about two years. To this day I’m not allowed to make White Russians because I supposedly don’t make good ones, so I always passed them off to him. He’s just a good man all around and has one of the lightest hearts. As I began to work with him, I got to know the man, not the bartender, which was a real treat for me.

Any future plans?
As long as Ben [Dougherty] and Kacy [Fitch] own this place, I’ll be here; they’re the best owners to work for. It’s that good. My colleague, Erik [Hakkinen], is a godsend of a friend to have behind the bar along with everyone else I get to work with. I can’t think of a better place to be. It took me about three years to beg and plead to get a job here and there’s no way I’m giving it up. They’ll have to throw me out the door kicking and screaming.