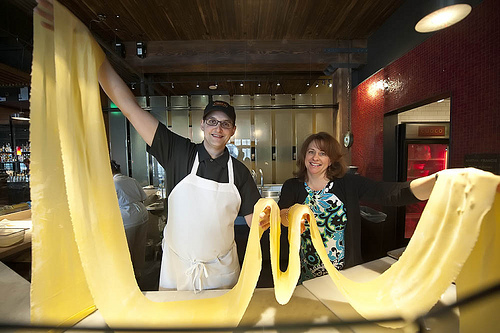 [Photo: S. Pratt]
One year ago, Tom Douglas broke his own rule of clustering his restaurants in a two-block radius in the downtown core. In quick succession, he opened Cuoco, Brave Horse Tavern, and Ting Momo's in the Amazonia campus in South Lake Union. We caught up with general manager Patty Jacklin and chef Stuart Lane to ask them about their first year. Eric Tanaka, Tom D's executive chef and a partner in the business, jumped in to answer a few questions regarding Cuoco's origins.

How did this project come together? Who had the vision to do Italian? ET: This project came together because of Vulcan’s tenacity and vision for South Lake Union. We actually turned this project down multiple times for multiple reasons but Vulcan kept at us until we said yes. And we are glad we did.
We like that the building was restored true to its era. Its character is a comfort amidst all the new construction. The Italian vision has been a long time coming. Tom, Jackie, Pamela and I have an affinity for the Piedmont region of Italy and have worked and traveled through the area extensively.

What was here before?PJ: The original Terry Avenue Building was built in 1915 as a warehouse across from a freight depot, then a truck factory, cabinet shop and a hardwood flooring distributor. The building became a historic landmark in 2008. Terry Avenue Building reserved its original footprint. Vulcan held the vision to preserve the character of the building’s history.

What were you thinking about in terms of designET: Tom and Jackie had the base design in their heads and Graham Baba, who seemingly have designed every restaurant in Seattle, did a great job bringing it to life.

How was the build out?ET: The build out was the best ever. We used the same contractors as Amazon and our project was a relatively small job for them.

Did you have any delays?SL: Nope! No delays! Vulcan, Callison, Graham Baba and GLY were all over it. We were actually scheduled to open after Brave Horse Tavern. We decided to open first because we wanted to be a part of Seattle Restaurant Week.

How was the opening? Did people check it out? SL: The opening went great! Tom and ET brought me on months before the project. We tested, tasted and designed the menu concept and our vision.

PJ: We had a Cuoco test kitchen event at our Palace Ballroom before we opened. We tested out some dishes and concepts to guests. We discussed guests’ preferences on anything from coat check to Frank Sinatra. When we opened it was really exciting. It was a whole new neighborhood – the vibe is fantastic! I think everybody was excited to be here.

Did you have to make any changes to the menu after opening?
ET: As with all our restaurants you see what works and what doesn’t. Our opening menu had a classic look and feel. It was out of sync with our sleek and modern dining room so we changed to a more modern, clean format.

SL: It’s funny because we kept many of the same menu items but they received greater fanfare under the new format.

How did you deal with mixed reviews?
ET: As with any review we get, good or bad, we welcome the information and always look to improve. You can’t have an ego about your joint, if people aren’t digging it you have to change. We constantly mine all sources of information to help better our experience for guests.

How was the opening of Cuoco different than other Douglas restaurants?
ET: The biggest difference is that we hired a chef from outside our company to open Cuoco. We brought in Stuart Lane, because he worked in the region of Italy that inspired us and he also worked for Holly Smith whom we love and adore both personally and professionally. Stuart not only had to learn a new kitchen and staff but also the ways of Tommy D. It is no small task to understand the intricacies of a big kitchen culture. Stuart held up well and we love his boyish charms.

Are there any differences between the customers for Cuoco in SLU versus the other downtown Douglas spots? Differences in the neighborhoods?
SL: All of the restaurants have a different feel and they attract different folks, so yes they are unique. The most interesting SLU trait is that the customers travel in packs. It makes for a wonderful energy. There’s no place better to be for lunch.

Future plans?
PJ: Lots! We have can’t wait to get out and cook in the piazza. We will certainly bring our bocce court out on Mondays, we will have music, events and more dinners.