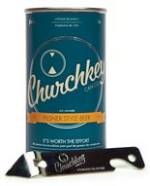 Flattop beer is making a comeback. According to the Oregonian, the Churchkey Can Co. — a Sodo microbrewery(Two Beers does the actual brewing) headed up by two Portland homebrewers and Entourage dude Adrien Grenier — is packaging beer using the retro flattop can design, which forces drinkers to puncture their own can with a churchkey (as opposed to opening with a pull-tab). No word on how the old school can affects the beer itself, but, you know, retro! [OregonLive via Eater PDX]