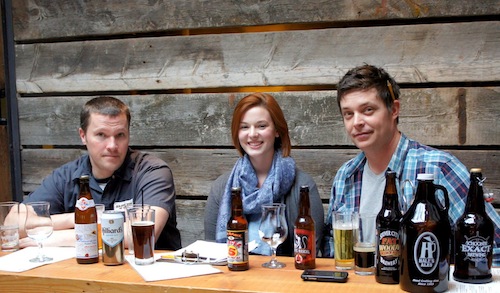 Over the past couple of years, Tom Douglas has launched a new generation of restaurants in South Lake Union: in addition to a second Serious Pie and a central bakery (Dahlia Workshop) on Westlake, he also opened Cuoco, Brave Horse Tavern, and Ting Momo in the historic Terry Building, surrounded by thousands of Amazon cubicles and hundreds of medical research offices. You can read Eater's “One Year In” interview with Cuoco's leadership here. This installment brings us up to date on the upper level of the building, the beer-centric Brave Horse Tavern. We sat down with GM Scott Whited, chef Brian Walczyk and “Beer Czar” Kayle Thompson.

What was here before?
SW: This was a floor finishing company. When I first walked the space, it was all walls and stairs. But Tom had been talking about a pretzel and beer restaurant for a long time. And shuffleboard. Twenty-ounce schooners of beer, homemade pretzels and shuffleboard. He'd been talking to Amazon, and he knew this is one of the things they were looking for.

So you hit the mark?
SW: No question about it.

Was there anything that took you by surprise?
BW: I think we weren't quite prepared for the numbers.

You were concerned about not having enough customers?
SW: We thought we might die after Happy Hour on weeknights, never mind weekends. But people keep coming. Now we'll do 500 covers during the week, 800 on weekends. We do a fried chicken special on Sundays, live music on Tuesdays, we've got a beer club.

BW: We'll do 180 burgers a night, and maybe 25 bratwurst, 60 pounds of bratwurst a week. We didn't want to be pigeonholed as a burger bar, though. We've got other dishes, too, like smoked trout, ling cod and steak. We use the same cooking techniques as Palace or Dahlia; we've got the same equipment as the other restaurants.

You've got a lot of seats to fill, right?
SW: We've got 150 in the dining room, plus five picnic tables on the patio.

A rumpus room for South Lake Union, it's been said.
SW: I've heard that. We've got a lot of activities here, shuffleboard, darts, maybe watching the Mariners. Shuffleboard, I've played a few times at Beveridge [Beveridge Place Pub in West Seattle—ed.], and at the Viking in Ballard, but they don't have two lanes.

Some people complained that you're not kid-friendly.
SW: We can't be kid-friendly! We're a pub, you can't come in unless you're 21! That was a problem, in the beginning, when we were doing brunch but Cuoco wasn't, people would show up with their kids, and we had to turn them away.

Some people complained that their drinks would slide off the bar.
SW: The last few inches of the bar slope down, so you can rest your arms on the bar more comfortably. Until we fixed it, we'd lose one or two glasses on a Friday night. But we just put down a metal strip where the angle changes, and now there's no problem.

How about the pretzels?
BW: It's amazing. We went through 96,000 pretzels in our first year. We get the dough from the Dahlia Workshop bakery, fresh every day. It's a good recipe. We'll roll out the squares of dough here, knot them into pretzels, and bake them for about 10 minutes at 450 degrees. We make the dipping sauces here in house.

Did you need to make any changes?
SW: We added a weekday breakfast menu this month. Two breakfast pretzels (ham and cheese, and a peanut butter & bacon number called the Elvis Pretzely), a $12 Big Breakfast.

And something called Horse Food?
BW: That's a dish of Dahlia Workshop granola with yogurt and dried cherries. It's great for the early-birds.

You're new to the “Beer Czar” position, Kayle.
KT: Yes, that's true. Warren Peterson had that title, and he was a sous-chef here at Brave Horse at the same time. He left to open the Elliott Bay brew house in Lake City. I'd been spending a lot of my time on beer, so I'm glad that I got the job. I'm not a cook, so they made me an assistant manager here at Brave Horse.

What are your favorite beers?
KT: Right now, I'm enjoying the Caldera IPA from Oregon. And this 1809 German Weissbier is amazing, It's funky on the nose but has that slightly sour, lactic character that makes it great with fatty food especially. And I love anything with tiny bubbles.

What's the best-selling beer?
KT: By far, it's the Brave Horse Ale that's brewed for us by the folks at Schooner Exact in South Park. It's the only permanent handle out of our 22 taps. During Happy Hour, we do a $4.50 bottle of Racer that's really good. And then there are the Happy Hour boilermakers, especially Oly with a shot of Jim Beam.

Is it true that Amazonians travel in packs?
SW: It really is. We'll get groups of 20 or 30 coming in together.
KT: They're really nice. And they really, really like to drink beer.

Brian, how to you feel about being named “Seattle's Hottest Chef” in the Eater.com competition?
BW: I'd rather be known as talented and hard-working, if truth be told.