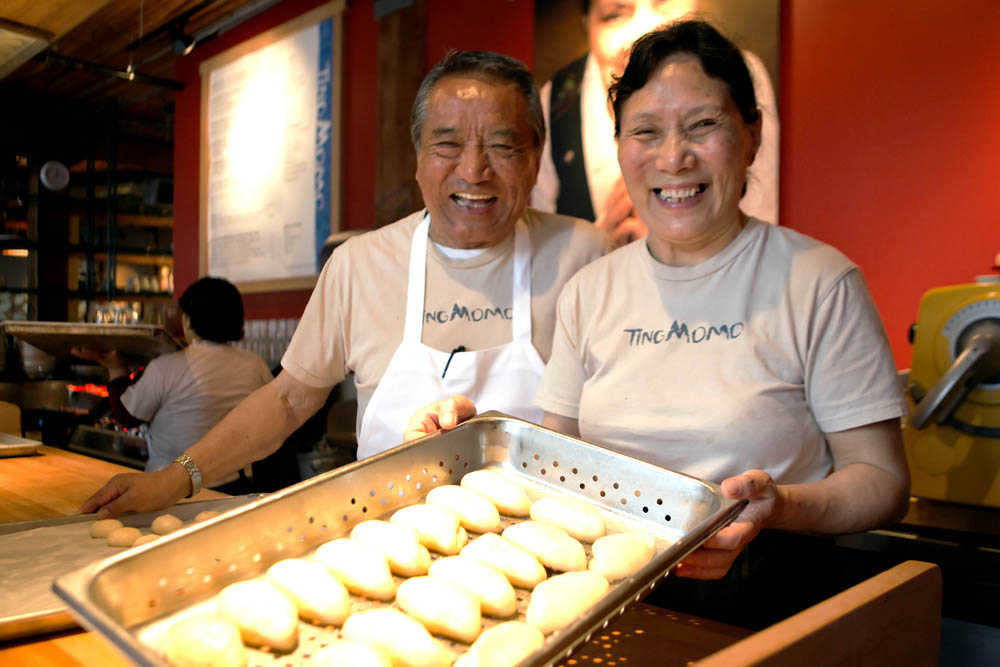 One year ago, Tom Douglas broke his own rule of clustering his restaurants in a two-block radius in the downtown core. In quick succession, he opened Cuoco, Brave Horse Tavern, and Ting Momo's in the Amazonia campus in South Lake Union. The heartwarming tale has been told before, how Tom Douglas created this lunch counter specifically for one of his favorite chefs, Dekyi(rhymes with Cheeky) Thonden. Eater sat down with her one morning two weeks ago, before the lunch rush.

How long have you been working for Tom Douglas?
Ever since I came to Seattle, in 1996.

It was sort of a roundabout journey, according to reports.
My family fled Tibet when I was ten years old and settled in India, and that's where I trained as a chef. When I got to Seattle, the only person I knew was Duskie Estes. She's gone on to have her own restaurant, Zazu, in Santa Rosa, and to be on "Iron Chef," but at the time she was the chef at Palace Kitchen. She introduced me to Tom and ET (corporate executive chef Eric Tanaka) and they gave me a job at Palace Kitchen. Then ET moved me to Dahlia Lounge, and finally 8 or 9 years at the catering company.

And all that time, your Tibetan dumplings, your momos, were becoming increasingly popular.
They were really popular at events, you know, because they are different and really tasty.

What happened when you opened here?
We were the third spot to open in this building. Cuoco, downstairs, was the first, then Brave Horse Tavern, across the hall here on the upper level. The day we were finally ready, there was a line out the door.

Your restaurant has maybe 40 seats and is only open for weekday lunch. Does that make sense?
Yes, because, for one thing, there's a lot of preparation involved here. I'm here every morning making dumplings, making the sauces. My husband, Loseng, is here, too, and helps me make the Thentuk (hand-pulled noodles). I also have Frankie (Cannata-Bowman) in the kitchen with me during lunch. And I still work for the catering company sometimes, when the customers ask for a dumpling station at their events. Brave Horse uses the space in the evening for special events.

It's not just the dumplings; there's a jar of spices on the counter and a sign that reads “Spices Make Your Self.”
Yes, I make all my own spices. Coriander, cumin, coriander, orange, apricot, tamarind. The flavors are different. Sometimes people don't understand, they think they're going to get something that tastes traditionally American, and it's a shock. You see it on Yelp. Many of the guests, though, they eat here because they already know the Asian cuisine or else they enjoy the novelty.

Tell me about the momos.
They're made with yak meat from Colorado, where they eat a special grass diet. There's no fat. We grind the meat with garlic and spices, and moisten with coconut milk. That's the secret, because the momo has to be juicy. One cranberry inside, and one on the top, so you get some sweetness, too. To hold in the juice, they have a thicker skin.

It's not some Himalayan version of fast food, though.
Oh no. We make everything by hand, everything. And it's not street food; it's for aristocrats.

And that wonderful sauce!
Yes, it's a coriander yogurt.

What have you learned about the clientele?
They're very loyal. Every Monday the special is duck buns, and we always run out. More duck buns, they say. They make a joke, “Duck buns are Deekyi-licious!”

There's a photo of you with the Dalai Lama on the back wall.
I had the good fortune to cook for His Holiness on two occasions, first on in Vancouver, and then on his visit to Seattle. There were no other Tibetan chefs in this part of the country! His Holiness told me to “Be nice and be kind. And don't let us down.”