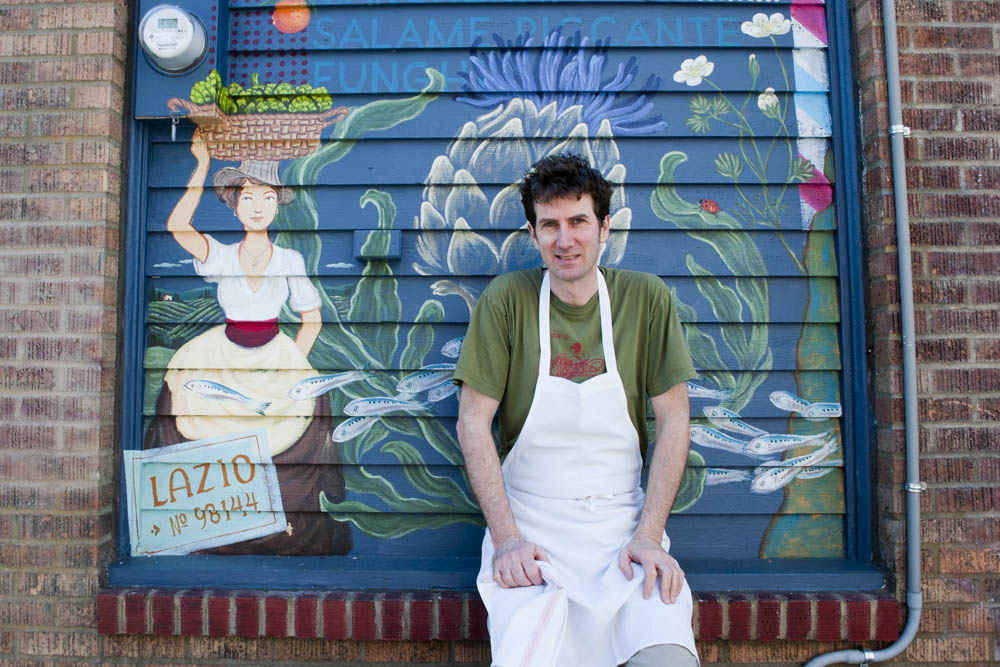 Jerry Corso was a familiar face in Seattle restaurant kitchens before he opened his own place a year ago, the 50-seat Bar del Corso in the Beacon Hill neighborhood. Eater sat down with him recently to discuss the past year.

Tell us a little bit about your background.
I started as a dishwasher at the Olympic Inn in Poulsbo. I was on the opening crew for the Palm Court in the Westin Hotel, and I worked a season as a chef for Great Pacific Cruise Lines. Then I spend a year in Italy, cooking in Venice and Rome. On to New York and DC, then back to Seattle -- Cafe Lago, Campagne, Market Place Caterers, and five years at Harvest Vine. Off to Italy again, cooking in Piedmont, the Roman countryside and in Umbria! Obelisk in DC hired me back as their chef, and I returned to Seattle as chef at Betty.

Then you decided Beacon Hill needed a pizza parlor?
My wife, Gina, and I live on Beacon Hill. (Gina is Angelina Tolentino,a painter--Ed.) We realized that it's been a very underserved neighborhood. Maybe because there's a perception that it's too sleepy up here. Would there be enough movement and passerby traffic to support what we wanted to do here? I approached this with a confident exterior. So my biggest surprise in this respect was that not only did we have our loyal regulars and neighbors, who knew this space as the Beacon Pub, but others who traveled clear across town to come here.

What changes have you noticed in the past year?
Beacon Hill seems to be growing up! We have a few new places opening on the Beacon strip, pretty soon, there'll be no need to leave.

You told one interviewer that pizza dough is an ongoing process.
I mean is that the dough is a lot more than a recipe, or just throwing flour and water in a mixer. From sourcing the flour to the ambient temperature. The handling of the dough is the first half, then the wood fired oven is the other. That's where our fire master, Toby Carroll, comes in.

What's your most popular pizza?
Most recently the morel and spring onion pizza! Our Fava bean and Sausage when in season, but the Margherita, and the Funghi probably take the honors.

With both a pizza oven and a serious kitchen, how's the split between pizza and "cucina"?
The breakdown is about 50-50. It's great that most people are ordering a few small plates, then getting pizza, and perhaps dessert.

What are the non-pizza items people are ordering?
The suppli, the panzanella salad in the summer, the braised yellow romano beans, the fried Roman artichoke, local melon and figs with Prosciutto San Danielle, the meatballs, the octopus, the sausage, anything with fava beans, anchovies, or burrata! oh and the mussels

You've had great reviews.
We have been very well received. We are a solid group of professionals and try to not get caught up in what one person has to say about us. We like to see people smile in the restaurant.

What about Yelpers?
Truthfully, I never read Yelp. If I need a recommendation on where to eat, wouldn't you want me to go to Eater?

Any surprises?
Our customers are pretty good eaters so I'm not usually too discouraged how they order. It is strange though. On certain days with no explanation, you will sell a lot of one item and little of another, then the next day if could be the reverse.

How much fun is it, having your own restaurant?
Fun? Hell yeah! We've been graced by the spirits of San Gennaro, Santo Bacco, and the Beacon Hill Boogie Man. It could be much worse... we could be slow and I would still be working endless hours.

Are there any changes to expect for Year Two?
For starters, we're adding outdoor seating! First off will be in the front on the sidewalk (of course this is dependant on how fast the city moves) then at some point in the future we would love to add the garden patio in the back.

There's no phone number on your website!
That's my fault on the phone, I asked Gina to not put it on there, especially since we don't take reservations. I need to cook, not answer the phone. But for the record, it's 206-395-2069