Share All sharing options for: Michael Mina on RN74's First Anniversary in Seattle 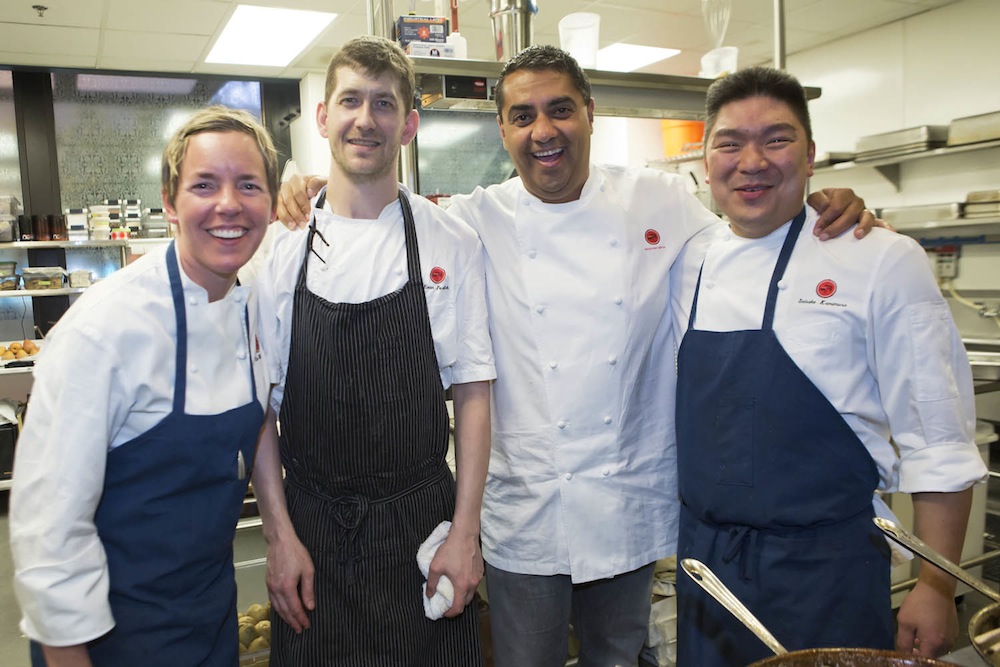 What made you decide to open in Seattle?
I actually have looked here for 12-13 years, before I'd gotten all the way to really almost signing leases here. Because, there's a few reasons with me. Sometimes we'll go to a market just based on it being a relationship and a partnership with a hotel. Those are the obvious ones. But, then when we pick markets where we're going to do like what we did here, those are much different for us. Those markets, we go to based on three or four things. One is staffing. I know Washington state and the work ethic of people here is phenomenal.

The next thing you look is clientele. Is the clientele there going to be able to support what you're doing. Is your vision going to resonate with them. And, I really felt that RN 74 was a very good fit because of the third thing which is product. Can you get your food products, can you get your wine can you get your products to the restaurant?

Why RN74 as opposed to other concepts?
RN74 is a little different from Michael Mina, where i'm flying product in from all over the world, and my price point is a lot higher. Here, you want to work local as much as you possibly can. Or, at least local being not across the country. Another big plus for me is I already make about six trips a year up here to see family and friends. So, that was why we started looking so early, years ago. I was always up here.

Did you consider neighborhoods other than Downtown?
We looked in Bellevue and other areas. But, when this space became available—RN74 is a very urban, city restaurant. As we spent more and more time in Seattle, what we realized was that the city has so many great restaurants, the majority of which are in neighborhoods. I think it's important as a chef and restaurateur to bring something to the city that helps the landscape of the dining scene in the city. That's one of the keys to being successful. It would have been very easy for me to open a steakhouse here. I have a great steakhouse brand and concept. Seattle has great steakhouses. Yeah, we could probably have done more business than we do at RN74. But, I don't think it would have added much to the landscape of the food world here like RN74 did.

How did you come up with the design of the restaurant?
AvroKO out of New York was our designer. The way I usually work with designers is I start with the floor plan. That's one of my favorite parts. We figure out what type of seating. This is a really fun layout for a square space. The bar is the heartbeat, so we put it at the center. These higher booths, you can see the people, but they can't see you for people that want that. In a space this big, if it was all tables and chairs, you'd feel like you were in a dining hall. I really love going to pubs. One of the reasons I really like going to pubs is because the bar is the heart of the place. And, then there's all these cool little dining areas. There's always intimacy but there's an energy because of the scale of it. Anything that is a bar-driven concept for me, I always go back to a pub.

Is the restaurant on track with your expectations financially?
It is. It's actually a little above at dinner. A little above at the bar. It's been a little lower at lunch, which is now starting to pick up. The only day that didn't work was Sunday and we closed. We use that one day to clean the restaurant, to organize it and everything else. It's valuable to be closed one day a week, for the staff and quality of the restaurant.

Do you have any sense of the mix of tourists and locals?
We do have a sense of it. You can track it pretty closely with credit cards. The best way to track it, to grow the business . . . a couple of things. We look at whether business is growing month over month, because that tells you the word of mouth is good. Number two, we look at repeat business. Our repeat business is very high. It's second in the company, out of 21 restaurants. That's a great sign

What has surprised you the most?
I didn't know how big happy hours were here. And, so that's really helped this restaurant. Happy hour folks have been good little PR machines for us.

Is there anything you learned from RN74 in San Francisco that you've done differently in Seattle?
I had Aqua in the Financial District in San Francisco for so many years. And lunch there was, I don't know if I ever had a sandwich on the menu. Maybe I had one. I had a few salads and appetizer. But, it was a full two-course meal. The food had to be just as creative as night time. We started RN74 in San Francisco the same way with composed plates. Now, we're at four sandwiches and five entrees or something. Here we're about the same.

Any future plans? Are you looking to open in other cities?
Right now, nothing concrete. We have a few things we're working on. I just did a restaurant in Baltimore that I'm so proud of. We took a phenomenal Japanese chef who's a good friend of mine. For 15 years, he's worked at a Santa Rosa strip mall and the chefs all go there. The guy is a great cook. We built him a showcase restaurant. He's the chef partner. This place called PABU--that's for me, the future. I want to do that with other experienced chefs--what we did for Ken[Tominaga].

¸ All One Year In Coverage on Eater Seattle [-ESEA-]