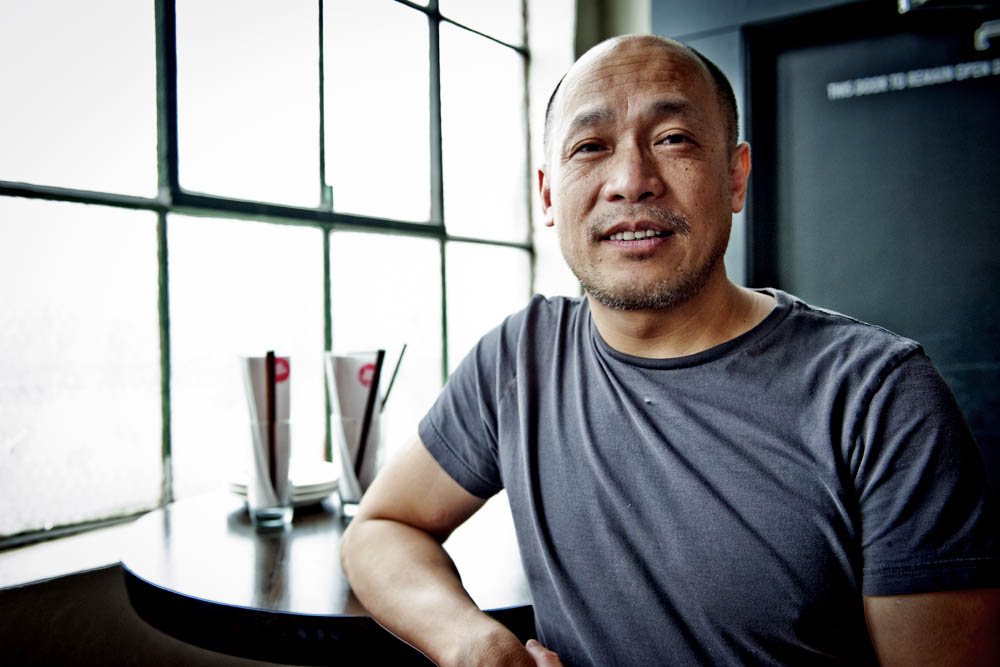 For folks who don't know you, can we run through your career prior to Ba Bar?
Sure. I was born in Saigon; my family fled in 1978 when I was 13. We just got on a boat and left. Eventually we settled in Alberta, Canada. I trained as an accountant and sold real estate for seven years, but I had worked as a busboy at a classical French restaurant in Edmonton called Bentley's where I cleaned the ashtrays and loaded the table-side salad carts, and I used to think, "God, I love this." When I moved to Seattle in 1996 to start a restaurant, my parents were furious. "We didn't risk our lives to leave Vietnam so you could become a cook," they said.

But become a cook you did.
Yes. I think my parents got over it when my sister Sophie joined me. Our youngest sister is a lawyer, by the way.

Then what happened?
After I started Monsoon, I began to notice how shitty all the lunchtime burger joints were. I also didn't realize that I was becoming sensitive to gluten. Vietnamese who live in the countryside don't eat wheat, you know. The noodles, the dumplings, the congee, all rice. You could only get French baguettes in Saigon, because they're made with wheat.

Eventually you had the two Monsoon restaurants, you had Baguette Box. What prompted you to start Ba Bar?
I wanted to create a place like the French-Vietnamese bistros in Saigon. And that would stay open past 10 o'clock. Not because I didn't appreciate Palace Kitchen or 13 Coins, but to provide a greater range of flavors. That, and morning pastries!

Tell us about this spot.
I found the building that had housed Watertown Coffee on 12th Avenue, in the middle of nowhere. My friends called it Ghettoville, but I loved it, especially the cloudy-hazy glass windows on the north side and the floor-to-ceiling windows in front. There's nobody upstairs, so nobody's going to complain about kitchen odors or noise, the way they did when we opened Monsoon East in Bellevue.

Except for the windows, we gutted the space. There's new insulation, and a whole new kitchen. It was unbelievably expensive; we had to sell Baguette Box to raise the money.

And you hired an amazing baker.
She's fabulous, Karen Krol. She's been here since November, and she turned the front section into a wonderful French bakery. Croissants, pastries.

You've had some well-publicized dust-ups with your bar staff.
No question about it. I don't have an HR department to filter applicants. Hiring people, I know, isn't my strength. Joanne Heron at Le Pichet and Cafe Presse, she finds decent staff. But there are 200 more restaurants now than there were when I came to Seattle, and the labor pool is thinner.

What's something else you notice about Seattle that's different?
Let's talk about pho. Not "foe" but "fuh." It's something we eat for breakfast in Vietnam, never past 11 o'clock, and served in tiny bowls. Here in Seattle, people expect a huge portion, even late at night.

What about value?
When I was cooking at Monsoon, I started making friends with the local farmers because their food was fresher and less expensive. I could get heirloom tomatoes for a dollar a pound, and I could order free-range chicken and beef. Not factory cows and factory pigs.

"Cheap" comes at a high price. Most of the pho parlors in Seattle, it's a scandal that they're serving meat from old dairy cows. If you want better food, you have to pay for it. Like wine. There's Two-Buck Chuck and there's Chateau Margaux. So we charge $10 for the pho at Ba Bar.

What's your favorite cocktail on the list?
The Nguyen Dynasty, with gin, rhubarb syrup, lemon, and sparkling wine.

Is there a signature dish on the menu?
I think the regulars would point you toward the pâté chaud, which is a $6 item. Most people add bacon gravy and a fried egg, and it's $10.50. If you're not into Asian small plates or Vietnamese noodles, Ba Bar is also a French bistro, so we have Saigon street-style steak frites with an 8-ounce cut called teres major for $17, or a fancy 12-ounce rib eye for $27.

What about wine?
I've been criticized because the wine list isn't 20 pages long with hundreds of bottles. It's one page of bottles and seven wines by the glass. More than that, it's not a bistro anymore. And those big, jammy wines, they're not flavor enhancers for our style of cuisine.

What would do you see down the road, for Year Two?
First of all, I'd really like to get the city to allow sidewalk seating out front. Somewhere along the line, the property owner cut a driveway into the curb, and even though the garage is long gone, the city isn't letting us count the full distance from the building to the curb.

More important, I want to hire a really good breakfast chef. We've got great pastries, we've got Caffe Vita coffee, now I want someone who can do an American, ham-and-egg breakfast.

Do you have any plans to advertise?
We don't, no. Vietnamese food appeals to maybe five percent of the public, not the broad base of people who enjoy Italian or French; it's not even in the top ten of ethnic cuisines. So it doesn't make sense to advertise to a broad base. Sophie and I do a lot of charity events, though. We tried one coupon program at Monsoon East (Living Social), to let people know we were there, but we won't do it again. Good honest food at an affordable price, that's the best advertising.

Do you have any advice for the crop of young culinary graduates?
First of all, you've got to be team players, not prima donnas. A restaurant has a lot of moving parts, and you can't run it on so-called passion alone. Look at one of Seattle's real kitchen pros, Jim Drohman. He was a Boeing engineer and quit, he spent four years in Paris learning how to be a cook, and only then did he come back to Seattle and work on the line at Campagne. You can't do that if you're just yearning for fame.

¸ All One Year In Coverage on Eater Seattle [-ESEA-]