The Walrus and the Carpenter's Jeremy Price

Share All sharing options for: The Walrus and the Carpenter's Jeremy Price 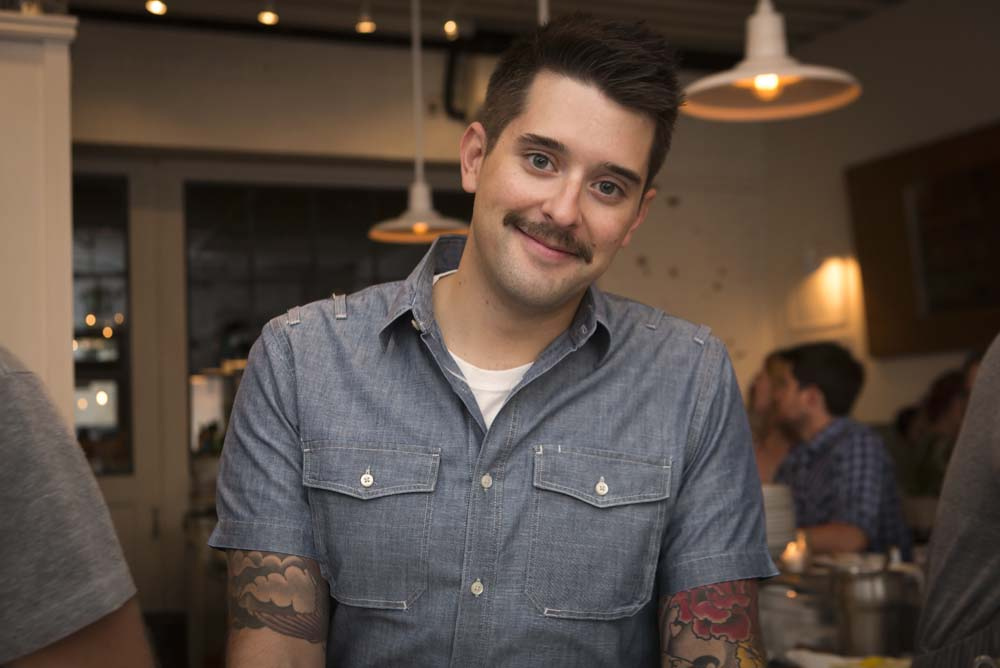 Renee Erickson was already enshrined as a member of Seattle's restaurant pantheon for her cooking at Boat Street Cafe in a warehouse where Belltown meets Lower Queen Anne. Two years ago she added a second restaurant, a 40-seat neighborhood oyster bar in Ballard called The Walrus and the Carpenter. A year ago, Frank Bruni wrote a very positive review in the New York Times, and a couple of months later, Bon Appetit named it one of the top ten new restaurants in the country. Ever since, the place has been packed most nights, and it falls to general manager Jeremy Price to sort things out. Eater caught up with him on a recent Saturday before Walrus opened.

Tell us a bit about your background.
I didn't come from the restaurant business. I'd been in THE VISTA program, and I worked for Blue Nile and Amgen. I got to know Renee at Boat Street, where I built some furniture for her when she decided to add hard liquor. (My dad was a serious wood-working hobbyist, so I knew about table saws and cabinetry.) I started working there two or three nights a week, as a busser and bartender, and helping out behind the scenes.

Renee and I had similar feelings about aesthetics and service so we got along well. When Chad Dale of the Kolstrand Building called and asked if she'd like to have some of the space they were restoring, Renee called my bluff. We designed the new space together. I used a program called Sketchup to do a 3-D model of the restaurant, which the architects used to create the permit applications. Then I built the tables, book cases and banquettes.

But there are only 40 seats inside.
That's right, it's very small. In good weather, we have another 20 seats at picnic tables outside.

What's the wait, at 8 o'clock on a Saturday night?
That's the hard part: it can be a two-hour wait, or even more. But people do wait!

How do you handle that?
We don't have any space here, but fortunately, Ballard is full of good bars! I ask what they might like, whether it's a cocktail or two, or beer, or a bite, and I take their phone number and send them out into the night.

Where to?
It depends. For cocktails, to Bastille, for wine to Portalis, for beer to Noble Fir. I'm happy to recommend Hazlewood, too. And there's Staple & Fancy right next door.

Who are your regulars?
There are a lot of people from the neighborhood and a lot of industry folks. Tourists, too, people who've read the reviews. But it's not a special occasion place.

Celebrities?
Not a ton. We had the Food Network and Travel Channel people come in, of course. And musicians. But we respect their privacy. And they have to wait like everyone else.

What do you like on your own menu?
I like whatever's seasonal. Last night I had the tomatoes ("Billy's Tomatoes with vanilla salt & olive oil") and burrata.

What's your favorite cocktail?
We have a drink here called the Mustache Ride, which is a modified whiskey sour. Bourbon, Cynar, Allspice liqueur and a maple-flavored simple syrup. It's become a signature for us, and we'll have it at the new restaurant, too.

Yes, tell us about the new place.
It's called The Whale Wins, and it's in Fremont. Opening dates are a moving target, but the contractor is Dovetail and they've got a reputation for meeting deadlines. They've told us October 17th.

Where do you go when you're not at the restaurant?
I probably eat at Revel twice a week. And at Dot's Deli in Fremont. I like Spinasse and Cantinetta and Poppy, too.

Back to your station: do you have a secret weapon?
Everyone wants to eat and drink right away, we understand this. But it's first-come, first-served. So there's no software program to fall back on. Just a fair system, plus an occasional glass of bubbles. We'll call you when it's your turn.