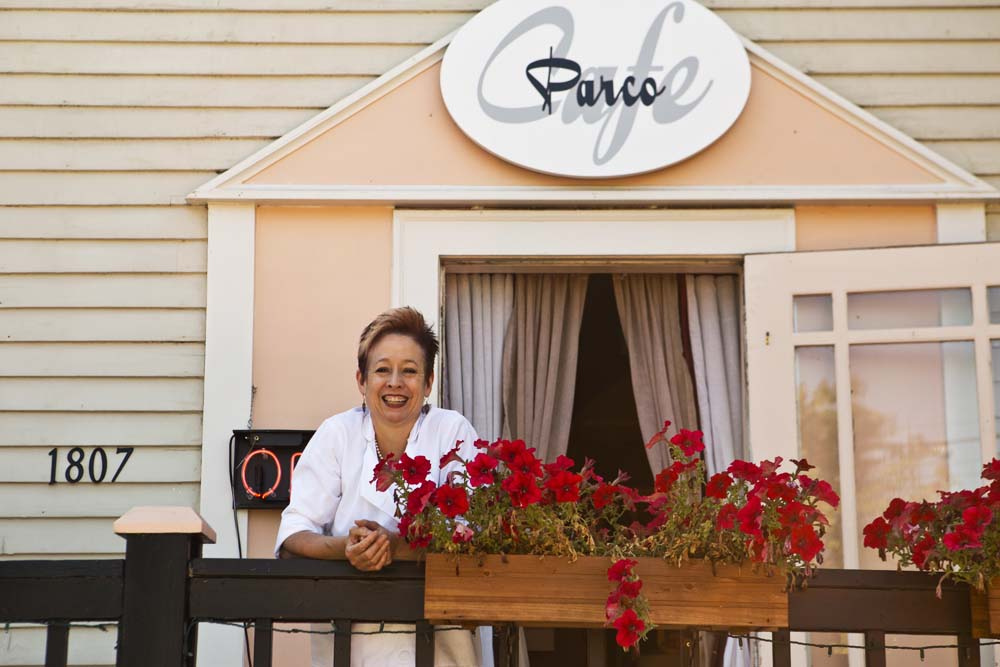 Celinda Norton opened the well-regarded 94 Stewart in Pike Place Market in 2005, serving up interesting takes on continental food (tempura avocado anyone?). The market location allowed the family-run restaurant to source locally and seasonally. Last year, Norton decided to sell 94 Stewart and open a neighborhood restaurant featuring modern Italian food. Norton and family took over 32 year-old Madison Park Cafe and reopened it one year ago as Cafe Parco. Norton was to have appeared on a Seattle episode of Chopped, but the producers recently informed her that there aren't enough contestants in Seattle to justify a Seattle show.

Tell us about your background, before you opened.
Many years ago I was selling real estate in Cowlitz County, in southwest Washington. I'd worked as a busser at a Holiday Inn when I was 16, and one day I bought a little restaurant. Then I opened a sandwich shop in a medical plaza. Outgrew that, bought another one, tore it down and made it into dinner house called the Rusty Duck, in Longview. It did well but I was bored, so I bought another building and turned it into Cibo con Amici, a 12,000-square-foot mid-market Italian restaurant with live bands and Longview's biggest bar. Then I opened wine shop, Pig Feathers.

By 2003 I left Longview and moved to Seattle. After a year of market research I opened 94 Stewart in April 2005.

And then, six and a half years later, you sold the business.
It was time to do something different, to have a restaurant in a neighborhood. I loved Madison Park, loved the fact there were people on the street, and I loved the terrace here, which is cool and shaded, and has lights in the trees at night.

I sold 94 Stewart to a family that turned it into an Indian restaurant, Kastoori Grill. It was hard to hand over the keys, so I understood what Karen Binder (the owner of Madison Park Cafe for 32 years) was going through when she handed her keys to me.

You came in with a menu that was quite different from 94 Stewart.
I didn't want to do another French restaurant, didn't want to replicate what she'd had already done. But the property said "European," hence modern Italian. Not the Italian I'd already done in Longview, that was Italian for a meat-and-potatoes clientele, and this is Seattle. So New World Italian with integrity and balance.

What renovations did you do, taking over a house that had been a neighborhood institution for three decades?
We basically gutted the building. The new layout accommodates more customers. 13 tables inside, and another 13 outside, plus a new private dining room with another 10-12 tables. We also installed new equipment in the kitchen and a complete dish pit in the basement. Outside, we pulled up a bank of ivy along the front, put down plastic sheeting, rocks, then pavers, and built a new terrace. We did everything ourselves except the plumbing.

Do you read your reviews?
Reviews? Can't not read them, but to give you an idea, one of the people on Yelp called me an Italian grandmother. Don't know where they'd get that impression. I don't consider myself a cozy person. I never hold back.

How do you deal with that?
We work harder to increase our base! Nic (Nicholas Norton, her son and Parco's General Manager) sends flyers to the neighborhood, not with a Groupon-style offer but to tell our neighbors that we're here.

There are people who don't know you're here?
Oh yes.

What about other Madison Park restaurants?
I'm thrilled that the Conservatory is there (Cormac Mahoney's Madison Park Conservatory), because it would be a lot harder if we were the only fine-dining spot in the neighborhood.

You have a happy hour, right?
Yes, but it's not geared toward the crowd that visits Cactus, which is a block away. We get a lot of older people for happy hour, because it's a lighter menu and it's earlier in the evening.

What about your plans for next year?
We'll have built out our arbor in front, we'll have wine-tastings in the garden, and the private dining room on the lower level of the house will be ready. We also plan to participate in more Madison Park activities like the art walk.

What kind of staffing do you have in the kitchen at Parco?
I work in the kitchen by myself. It's something I started doing about four years ago at 94 Stewart, when the economy shifted, and I got used to it. When you are a stress junkie and control freak like me, it pushes ALL my happy buttons!

When I opened Parco, I had planned to have more kitchen help. My daughter Lindsey worked with me a couple days a week initially, but with both of us as competitive as we are, that wasn't a good idea. When she left to cook at Tilikum Cafe, I rearranged the kitchen to give me more efficiency, and I really like it.