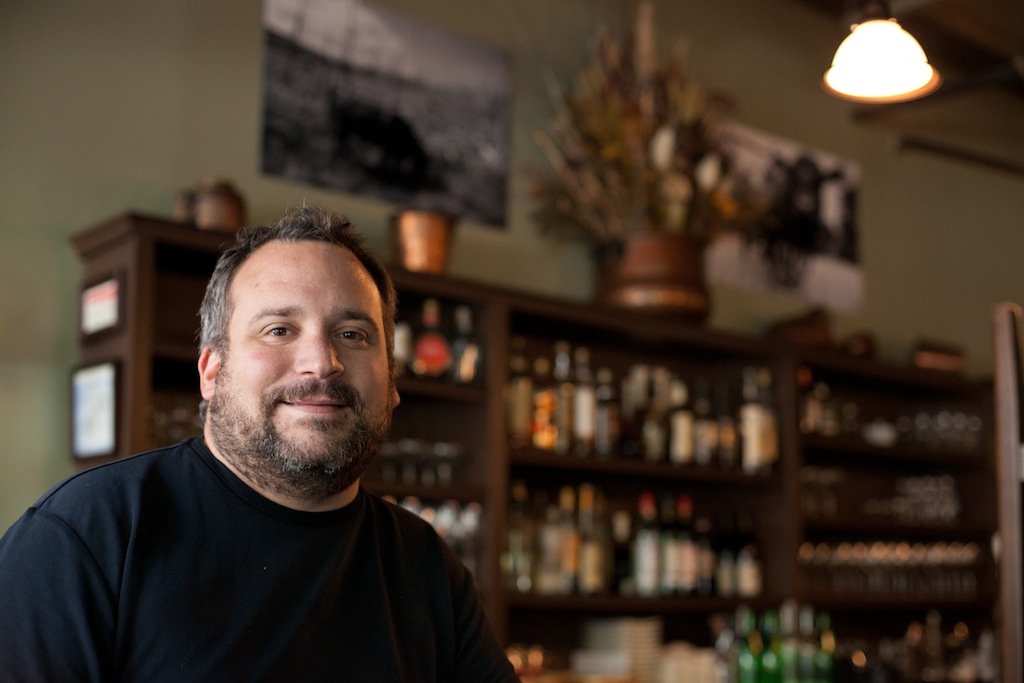 LloydMartin, at the top of Queen Anne, was less than ten months old when Seattle Weekly named it the year's best new restaurant. With 30 seats and a tiny kitchen, it's in the tradition of Seattle's chef-driven restaurants like Sitka & Spruce or Terra Plata. The menu includes a variety of appetizer plates, inventive versions of homemade pastas, and increasingly adventurous main courses based on game. Eater sat down with owner and chef Sam Crannell to look back over the first year.

Tell us a bit about your background.
I was born in Missoula, Montana, and grew up around food. I graduated from the Cooking & Hospitality Institute in Chicago and worked with Jared Entworth (at Atlantique in Chicago) until I moved out here. Cooked on Queen Anne at Paragon, on Capitol Hll at Quinn's and Oddfellows, then briefly at Five Corner Market in Ballard.

When my wife and I found out that Bricco was for sale, we jumped on it. I didn't bring on any investors, We live in a one-bedroom apartment and don't have any assets. But Bricco's owners, Kevin and Tracy Erickson, wanted to concentrate on Moshi Moshi in Ballard, so they helped make it possible for me to start LloydMartin.

The name?
My two grandfathers from Montana. They have both passed away.

Were you embraced by the neighborhood?
Not exactly. Not until articles started coming out in the Seattle Times and Seattle Metropolitan.

Did your menu evolve?
I think a lot of chefs are all out there trying to rediscover the same things. But yes, our menu has evolved. In the beginning we didn't have anything over $19, but as our clientele has built up, we've felt more confident with higher-end ingredients. We have elk, wehave Wagyu beef strip loin, we have half a rabbit for $30, for example.

It's not a job for every cook. You have to know how to make pasta, how to make sauces, how to debone game birds, how to work with high-end product. You have to understand the ideals of molecular gastronomy without actually doing it.

You don't have a walk-in?
We have a refrigerator that only has room for what we're going to cook tonight. So we talk to our purveyors, we ask them to bring the best of what they've got that morning.

How are you staffed?
There are three of us in the kitchen, plus a dishwasher, and three servers on the floor.

Seems like a lot.
You know, it's not "fine dining" on the level of Canlis, but don't be fooled by the casual atmosphere and the rustic tabletops. It's cooking at a very high level, and service that's a notch or two more formal than "casual dining."

What happens if six people want to have dinner together?
Well, we only have 30 seats, so for a group that size, we ask that they make a reservation a week ahead of time, and they give up control. We'll feed them a three-course, family style meal for $50 per person: a series of small-plate appetizers, a pasta, and a roast.

Is there anything about having your own restaurant that surprises you?
To this day, I'm surprised that people lead such different lives, yet they all want to eat between 7 and 8. But not at a communal table. My sous-chef and I have a little game going, we predict what guests are going to order. We'll call it: rabbit for her, lasagna for him.

What are your best-selling items?
Right now, it might be the freshly-pulled mozzarella that's served still warm. Our summer vegetables have been selling nicely, too.

What about sites like Yelp?
I think it's a wonderful tool for people to talk about their experiences, and it was valuable for us in the early days, when we didn't have much feedback. It helped us get better.

Anything you would have done differently?
It was probably a mistake to open for dinner six days a week. It's hard to do a good job under those conditions.

You told Julien Perry of Seattle Weekly that you would never do brunch at LloydMartin, but here you are.
Yeah, that was probably a mistake. We're never going to do a traditional Seattle brunch here, with eggs cooked to order and all that. What we're doing now is something else, and I don't know, frankly, if it's sustainable.

You also told her you felt partly responsible for the debacle at Five Corner Market because they wanted to be open for lunch.
Also true. But the Hayters are great people. First time restaurant, bad timing.

What's in store for Year Two?
I want to focus on getting even better, making LlyodMartin a stronger restaurant, being on the tip of everyone's tongue when they decide on where to go for dinner. There's a lot of good restaurants in Seattle. I like to have enough staff so that there's always someone to thank our guests for coming.

And maybe, by the end of the year, reaching a decision with my wife, who's also a chef [at Portalis], on what to do next.