Meet James Pech, the Guy Cooking Your Food at Altstadt

Share All sharing options for: Meet James Pech, the Guy Cooking Your Food at Altstadt

Introducing The New Guard, a column that explores Seattle's current crop of burgeoning culinary superstars. Know of an up-and-comer? Leave your suggestion in the comments or send it to the tipline. 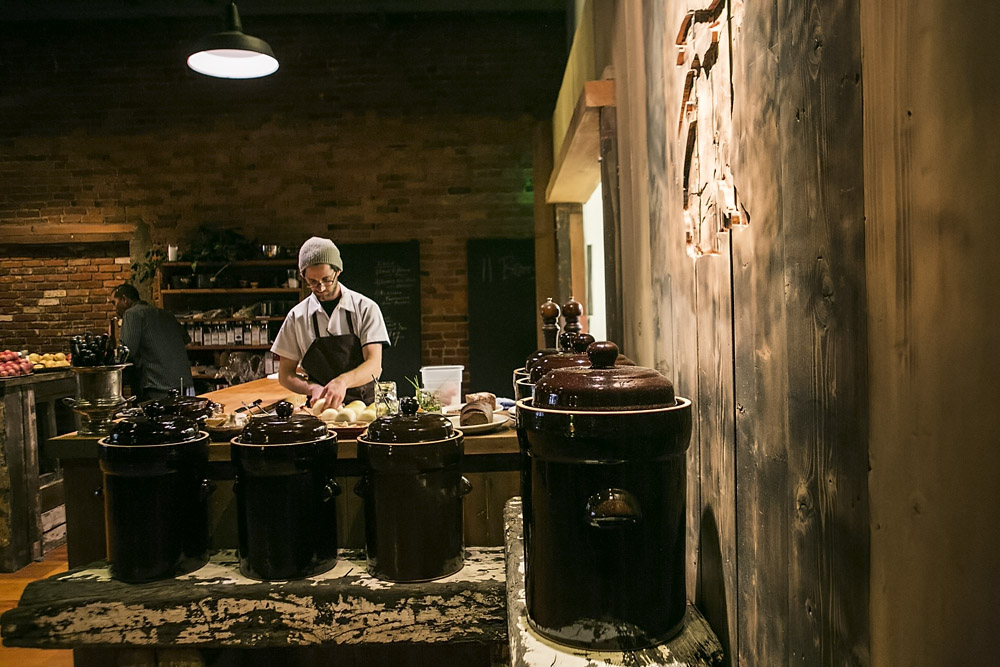 He's been mixed up in the Seattle restaurant scene for five years, but the name James Pech may not ring a bell for many — even those who have eaten his food. La Spiga, Spring Hill, and Hitchcock are all on his resume, but it's his new role as Chef de Cuisine at Altstadt, Brendan McGill's new German beer hall in Pioneer Square that opened Monday, that's easing him into the spotlight.

Here, a Q&A with the man whose kitchen graces and aspirations for a Czech-inspired restaurant are due in large part to his grandmothers.

How long were you at Hitchcock? (McGill's first restaurant)
I was there for almost two years. I came in November 2011.

What were you doing before that?
Before that I was two years at La Spiga working under [chef/owner] Sabrina [Tinsley]. Before that I was working at a little breakfast joint called Zeena's on Capitol HIll. It's not there anymore. During my time there, I did about a five week stage with Mark Fuller at Spring Hill. I learned a lot from him. 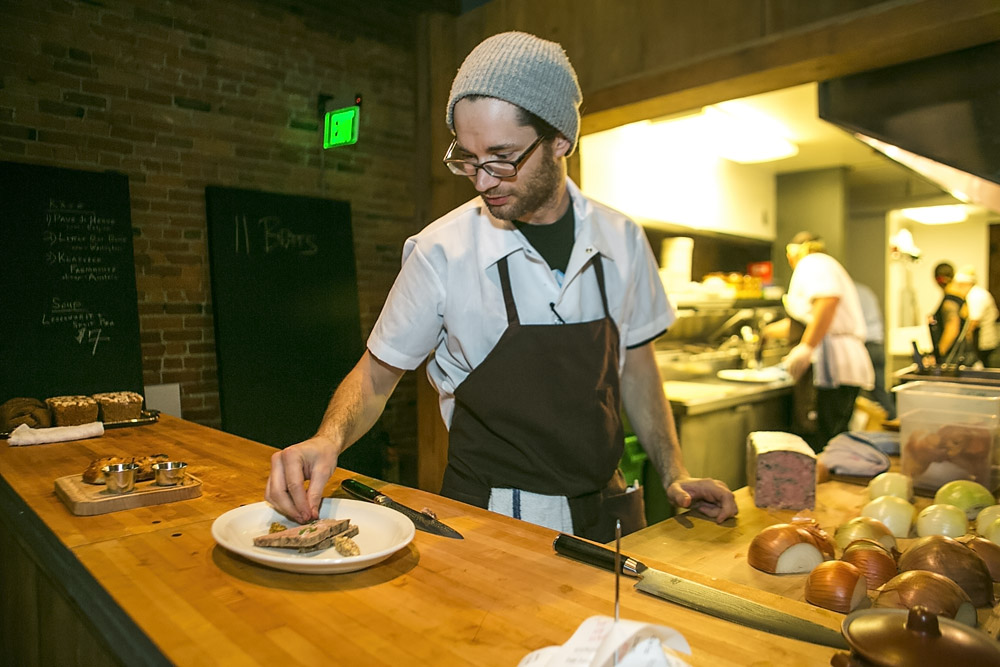 Are you from Seattle?
No. I was born in Iowa. I grew up in Colorado, went back to Iowa for a little bit, moved to Canada for a minute and then Alaska for four years before heading down here.

Why all the moving around?
I don't know. I was searching, I guess.

How did you and Brendan find each other?
His former sous chef, Keegan O'Brien, who's now at Blind Pig Bistro with Charles [Walpole]...he and I worked together at La Spiga, and when he had a position open he contacted me — and I was looking. I had been at La Spiga for two years —. I came out, loved the product and made that ferry ride for two years.

Without sounding like a guidance counselor, do you have a notion of what you want to be doing in, say, five years? And does it involve Seattle?
Yeah, I think so. It's a great area for food and for the kind of food I want to do, which is pretty honest and hand-crafted. I know there's a lot of people on the Noma bandwagon, but it's something that I've followed for a while now. A little over two years ago, I ate at Willows Inn and that sort of changed my perception and I really started to look outside of La Spiga. 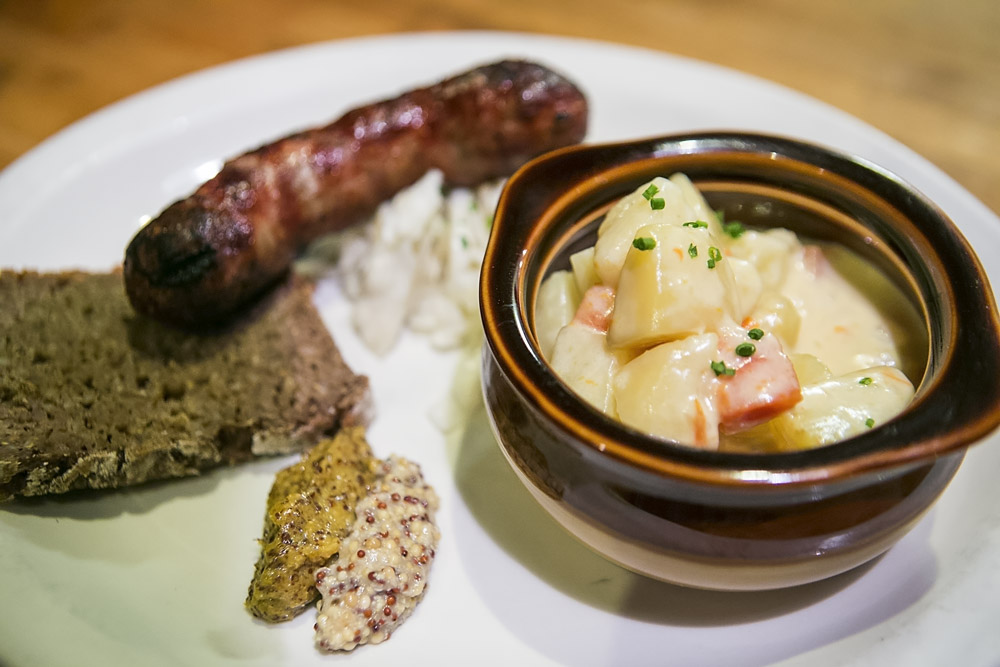 How did it change you?
That creative use of essentially everything, you know? An almost zero waste kitchen really appeals to me. When Rene Redzepi started Noma, they wrote a manifesto and you can find it online. There are a few tenets I always try and follow. One of them is looking back to look forward. I think if we go back far enough in how we handle our food, how we make our food, it's going to lead us in a more interesting direction. Not ignoring what has happened and what developments have been made in the culinary landscape, but incorporating those with not only what's tried and true, but what has been forgotten.

How do you incorporate that practice at Altstadt?
I think our sausages...they're a little bit leaner than what's traditional. We're doing a rougher grind than what you'd find in most places in Germany. It's mostly emulsified sausages there. But if you go back further, they didn't really have the technology to create that emulsification, not with the same kind of consistency, so I think if you look back 150 years, they were more of a rougher grind.

Lightening up the dishes a little bit. It's still German food, it's still hearty, but maybe not as weighed down with butter and cream; just trying to make it slightly healthier. I think part of that comes through in the raw fermented kraut, which they do serve as a garnish in Germany, but not really as a side dish. I think having that option, you really get to taste what the kraut is all about. 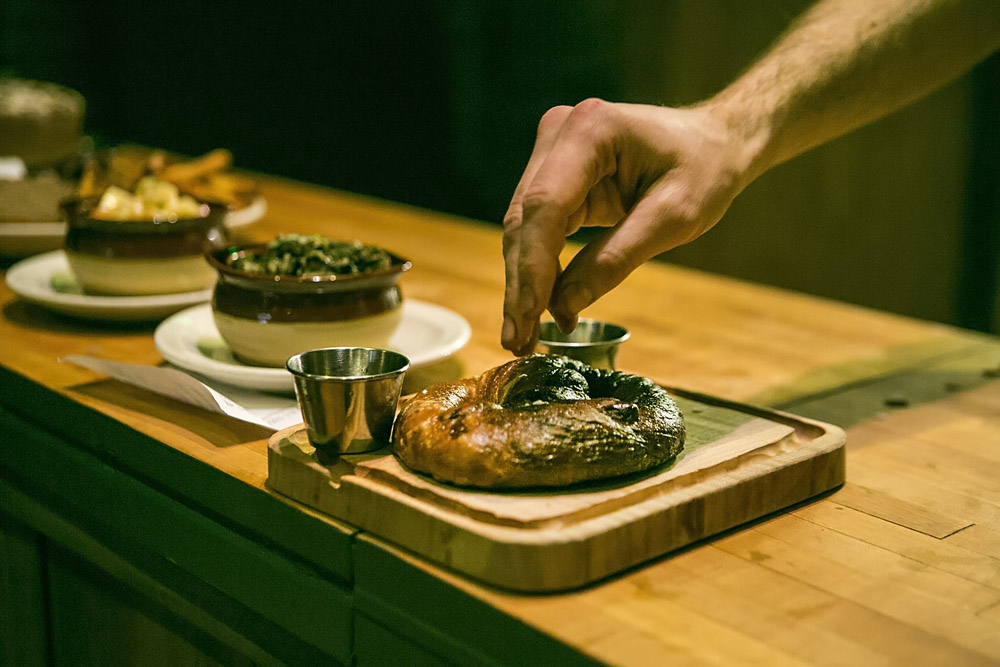 How has the culinary landscape changed In the five years you've been cooking in Seattle?
I think it's in Seattle and I think it's across the board. [Chefs] are getting away from sort of this "showy" cooking and getting back to basics. Less of the, "Look at this! Isn't this amazing?" and more of the "Taste this. Doesn't this taste amazing?"

Where did you learn to cook?
My great grandmother was the Lunch Lady in Buchanan County, Iowa at Starmont School District for, I want to say, 35 years. I would go back to Iowa during the summers and we would often make pies. I planted my first garden with her, which was a simple radish patch. Yeah, everything from pie crusts, to biscuits — she's always looking over my shoulder.

My grandmother taught me how to make homemade Czech noodles at a very young age, and it's a dish we usually had growing up once a year, Christmas Eve. It's a very simple dish — just onions, ham, and homemade noodles fried in butter. I did it a few times at Hitchcock and did the extra step of curing my own ham as well as making the noodles, but flavor-wise, it was exactly how I remember it growing up. Between those two women, that's really where it comes from. 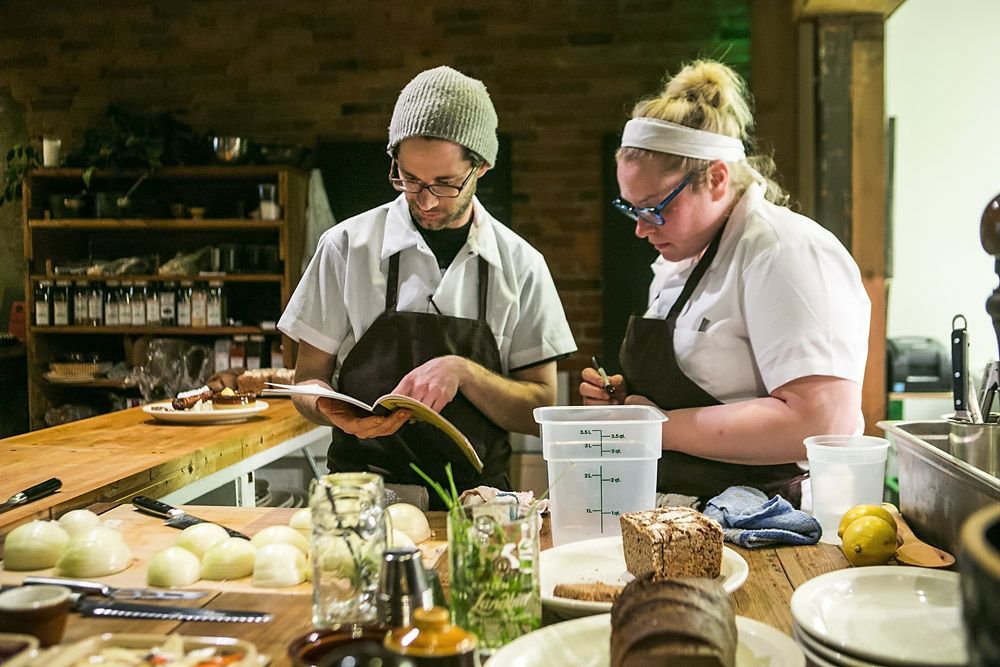 Did you go to culinary school at all?
I did not. I was contemplating in here [in Seattle], but right after I did my stage at Spring Hill I started at La Spiga, so it didn't seem feasible. I also came to the game a little bit late. I was 29 when I started cooking professionally.

Thoughts on culinary school?
I think it's a good foot in the door. They're fairly expensive and I don't know if the schools themselves are doing a good enough job preparing the students for making just above minimum wage when they graduate.

What's your litmus test for spotting a good cook?
This is my first round of hiring, but I did take something from [Mark] Fuller. He said that he asks every interviewee what they're reading as far as cookbooks. And so, I've tried to incorporate that into my hiring process.

Is there a wrong answer?
I think if you can only name chefs who are on tv, that's probably a wrong answer. I think at that point, you have an interest, but it doesn't show how deep your interest has gone yet. It's a good starting point. 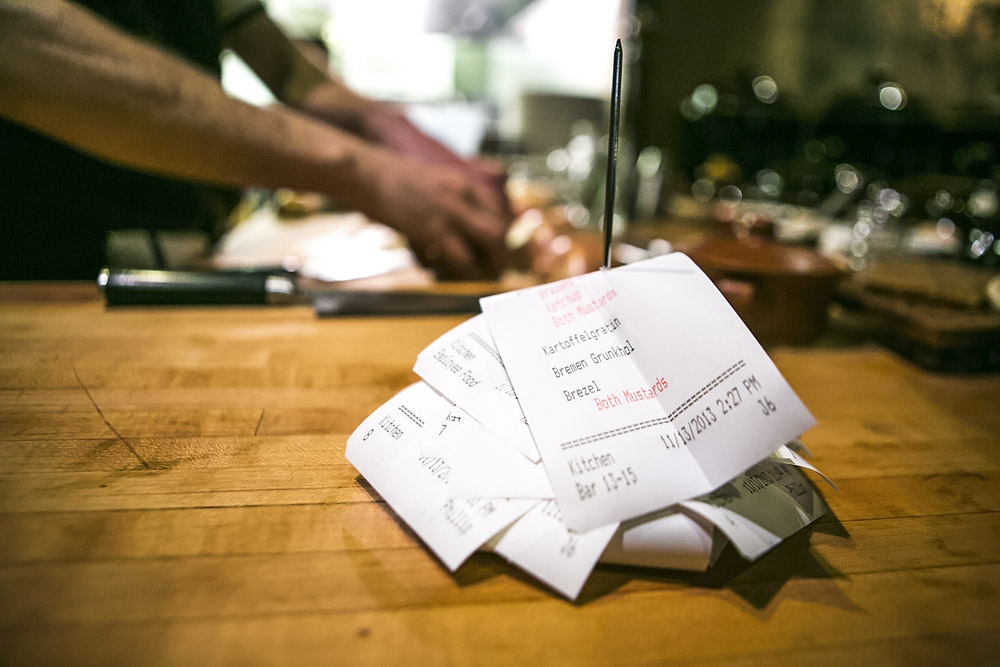 What books are you reading?
Quay, by Peter Gilmore. I'm always reading something of [Harold] McGee's. On Food and Cooking is an invaluable reference tool. It's wonderful, actually. For the German cooking, Alton Brown is a really good source. He seems to have a really good grasp of German cooking. It's his scientific approach to it, I think. Rytech Kutas for charcuterie. I've been busy, so my reading list is shorter than it has been in the past.

Career aspirations?
I think a nice small restaurant with a prix-fixe menu eventually. Three or four years down the road probably. When Seattle's ready for it. I'd like to go back to the Czech Republic — my family is Czech — and I would like to spend a little bit of time there sussing out traditional foods and update them a little bit, refine them a little bit more, and have plated courses.

Oh! Magnus Nilsson for the last year has been a great [author] reference. What he's done, particularly for some of his primitive cooking techniques, I find interesting. The reason I brought that up is because I'd like a restaurant that's focused around a hearth. An open hearth with a grill area, an oven area, and have the good majority of the food come from that hearth and build the restaurant around that.
· Altstadt [Official Site]
· All Altstadt Coverage [~ESEA~]