Share All sharing options for: Gettin' Learned with the Teachers Lounge's Desiree Wright

Welcome back to The Barkeepers, a monthly column dedicated to the men and women who work behind some of Seattle's hottest bars.

Desiree Wright has served up drinks everywhere from a pinball-centric game hall to one of the best bars in the world. And while she's comfortable on the floor and behind the bar, her new venture with husband Perryn Wright is the kind of social study she's been after for years.

Des and Perryn opened Greenwood bar Teachers Lounge this past June, and with their fun drink specials and laid back attitude, it's easy to understand why patrons are eager to take a seat here.

For this month's Barkeepers column, Eater got a hall pass to hang with Des, finding out everything from which spirit lands her in detention, and the one she's embarrassed to admit she loves.

First of all, where did the name come from?
We've been playing with it for a long time. The concept was born when I was working at Zig Zag, back in 2003 or so, with the idea as sort of a Bar 101 as the working title. We had this idea that we wanted to teach people how to be in a bar, and we were going to be this vodka-free zone. It was mean, it was instructive, with every amount of bitterness from being in the industry all stored up. But over time, as we got older, we were like, "I'd never want to work at a place like that, let alone go there." Customers would've come once for the kitsch and then never come back, because who wants to be treated that way? What the hell do we know? It's not about you, it's about the experience. But we liked the school idea, the idea to make it this fun place everyone could relate to, where people could learn and we could learn together. It really is for the nerds. 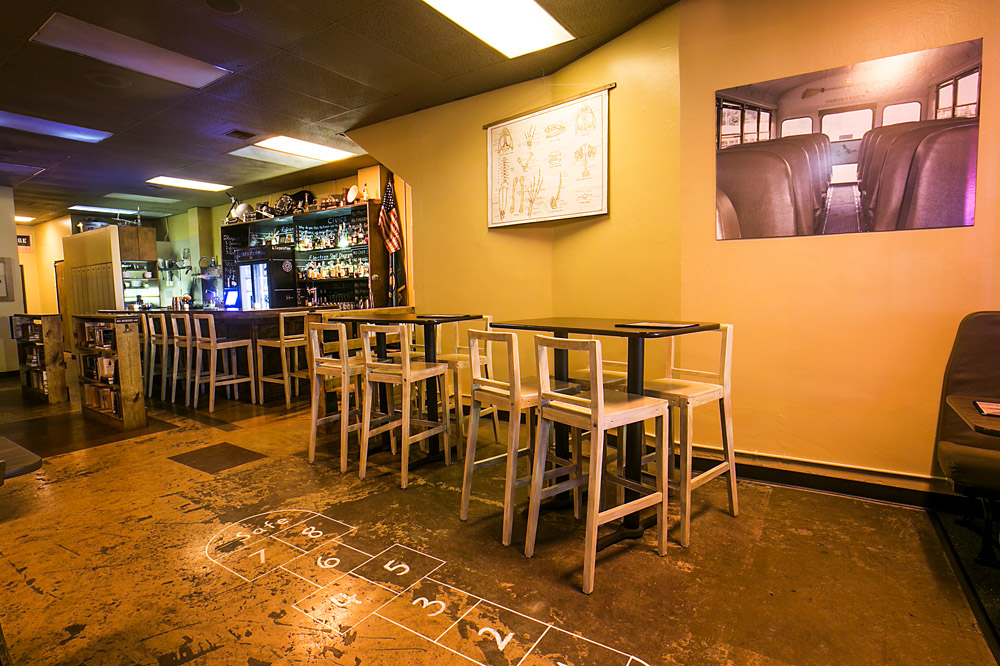 How would you describe the food?
We like to call it a "gastroteria" — played up versions of food you might get in school; fancy grilled cheese sandwiches and "lunchables" that are delectable meat and cheese plates. We wanted to keep it fun and accessible, but with really good ingredients.

And you're the cook, the bartender… everything. How often do you work?
Always (laughs). Well, between Perryn and me, we work six days a week, five a piece. And now, we're managing the kitchen, so days start a lot earlier. On days we don't overlap, we work the kitchen, bar, and floor. It's a lot, but it's great.

How's working with your husband?
It's great! We worked together at Copper Gate, so it's not the first time. But that place really brought out the worst in both of us. It starts out funny, sending snarky messages through the POS, but then it can get really negative. And when he left the company to work at Cicchetti and clear his head, we were able to be much more positive, and really focus on not being so dickish. This time around, we can really be so much more positive and have our priorities straight. 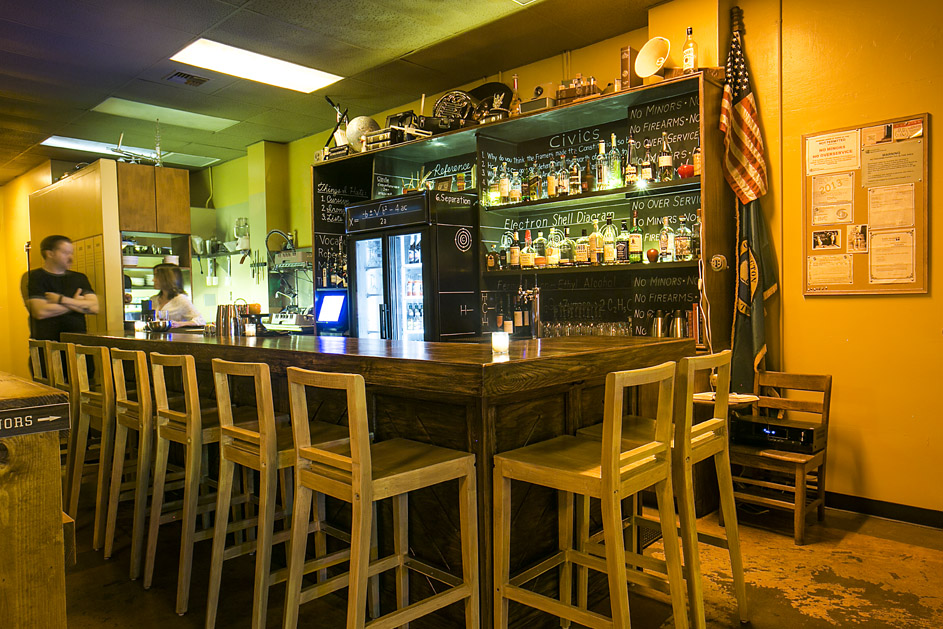 What else are you digging, owning a bar for the first time?
I love that Greenwood loves bourbon and Scotch. After working at the Copper Gate for so long, it was a lot of white room, white food, white spirits, serving white people. It's nice to have something brown in a glass, to play with that.

I'm loving the customers who are coming in, our new regulars, and carry over from other places Perryn and I have worked. Now, we just need more of them (laughs).

Do you miss the aquavit drinks at Copper Gate?
You know, I do miss the caraway taste of the aquavit, especially this time of year.

Have you thought about bringing it in to the new bar?
Yeah, actually, we'll probably make the Heldig — the homemade aquavit we had at Copper Gate. You start with caraway, coriander, fennel, and dill...add saffron and horseradish. We all made it, but it was Perryn's recipe originally.

How did you learn so much about liquor and cocktails?
I'm embarrassed to say how much I didn't know when I started working at Zig Zag. I honestly don't know how I got that job. I had worked at Shorty's before, but they only served beer back then. It made me fast, but Zig Zag made me understand what I was serving and what spirits went into drinks, and how. 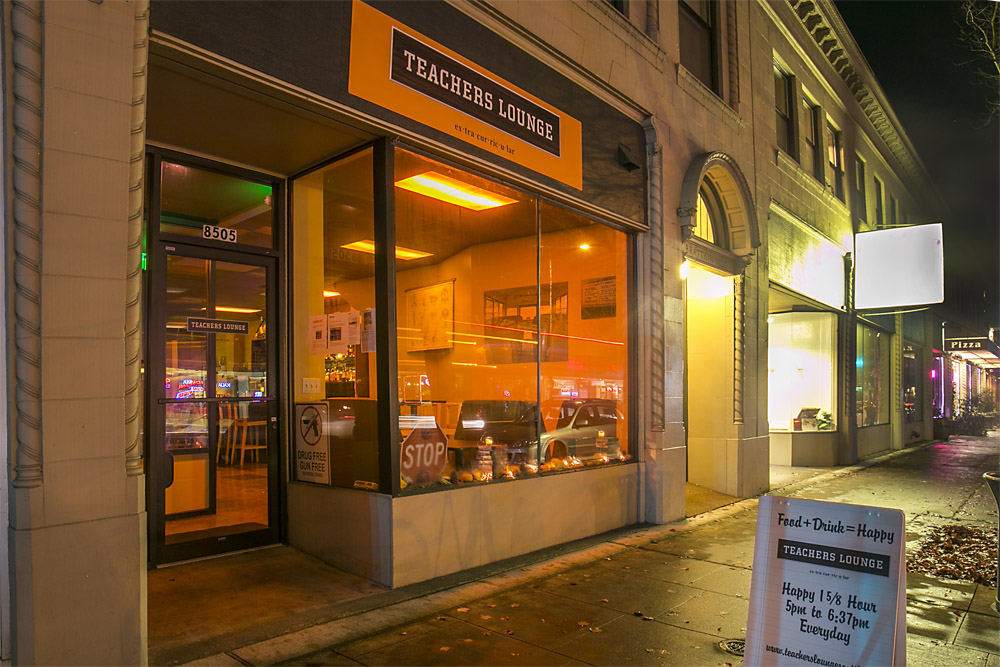 Are you an equal opportunity spirit drinker, or are there some you really like?
Well, whiskey is great, especially this time of year. And tequila, I picked up so much working behind the bar at La Carta de Oaxaca.

There's clearly a story here. Care to share?
Well, one time in San Francisco, we were drinking, bar hopping, and I found out I may be allergic to gin or something. Really, we were going to a ton of great bars, but they have different liquor laws, and so there wasn't food at a lot of them. And we kept going, "We'll grab something to eat at the next one."

Next thing I knew, I woke up without my clothes on — at the hotel, that is. I guess I must've gotten really itchy, broke out completely in hives. But yeah, gin — only with Perryn's care. I literally thought I needed to go to rehab or something, my body felt so broken, but it was just a terrible allergic reaction. I can drink a little bit of gin, it just has to be maybe not every drink, and I should probably keep some Cheerios in my purse.
· Teachers Lounge [Official Site]
· Ballard Industry Vets Set to Open Bar in Greenwood [~ESEA~]
· Teachers Lounge Coming to Greenwood in June [~ESEA~]