Share All sharing options for: 5 Point Not Apologizing For Google Glass Ban

They admit it's part publicity stunt, but The 5 Point Cafe is also making the...point that Google Glass is preeminently banned in their cafe because, duh, nobody wants to be filmed without their permission. The stealth camera accessory also doubles as birth control, so says the bar's latest Facebook post this morning. 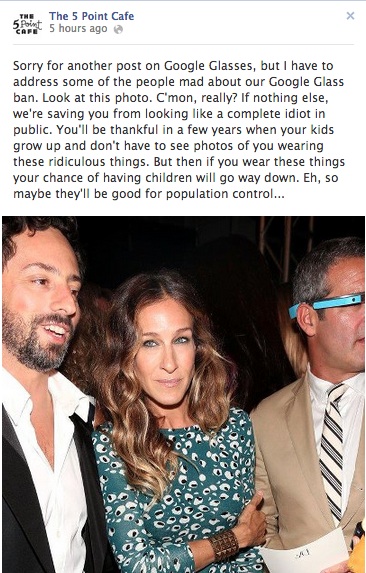 5 Point owner Dave Meinert, who is also one of the co-owners of the forthcoming Lost Lake Cafe, tells KIRO Radio:

The 5 Point appeals to a wide variety of people," says Meinert. "Some of the tech geeks come here, we're close by Amazon [...] It's OK if you wear them. I just don't want them worn inside.

You have to understand the culture of The 5 Point which is a sometimes seedy, maybe notorious place and I think people want to go there and be not known.

Tracking the ban dramz over the weekend, GeekWire points out that the 5 Point has their own videotaping device: security cameras.

Google Glass won't even be available for purchase until the end of 2013.