Share All sharing options for: Truck Slams Into Canlis, Barely Anyone Notices

The truck that crashed into Canlis Saturday afternoon has since been towed, but it took two trucks to unstick the thing, according to Brian Canlis:

The damage isn't too bad. We had to leave the truck there all night (Saturday) because the first tow truck snapped its chain trying to pull it out. It made for quite the conversation starter for all the guests who came to dinner.

What's more unbelievable is that not everyone noticed the big truck, which was clearly sticking out of the garden near the entrance. Says Service Director David Kim:

Only about 15% of our guests realized that it happened. Whenever I brought it up, guests would give me a confused look. I have no idea how they didn't see it. It was so funny to watch them drive right by it and walk in as though nothing was there.


Kim says it was too early for any diners to be in the restaurant, but there was a wedding taking place in one of their private rooms when the crash happened:

Those involved with it had a very concerned look on their face. I could see them thinking, "No, not today!" 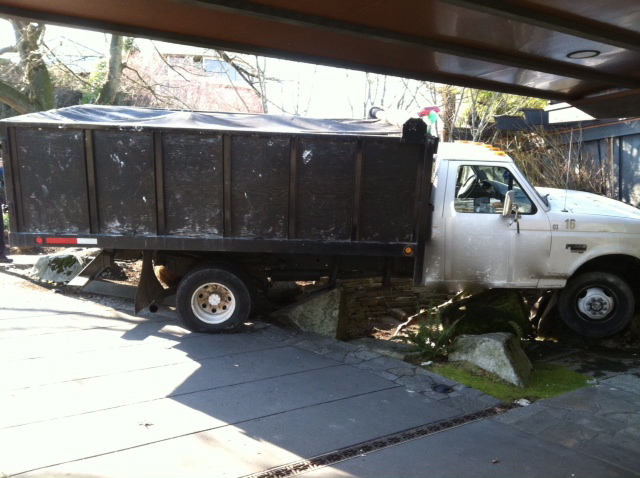 Kim says this is the sixth time someone has rammed into the fence or entrance since he's worked there. Fortunately, nobody was hurt.

Thankfully, it just damaged our fountain and fence. If it were a few more feet to the right, then it would have made a significant impact on our entrance way.

It's still a little fuzzy what caused the driver (who was hauling drywall) to plow into the side of the building, other than some good old-fashioned absentmindedness. Says Kim:

He was hauling a big load, which did not allow him to make the turn sharp enough. He was freaking out after the crash. He could barely breathe. He apologized at least 100 times within that first hour. I told him that it's okay, nobody's hurt.

Regardless of the big truck surprise awaiting diners Saturday night, Canlis says they had a full house and no valet issues.