Welcome to The Barkeepers, a monthly column dedicated to the men and women who work behind some of Seattle's hottest bars. Each post is thoughtfully shaken and stirred by Wendy Miller, founder of the Seattle LUPEC chapter and author of the Seattle Cocktail Culture app. 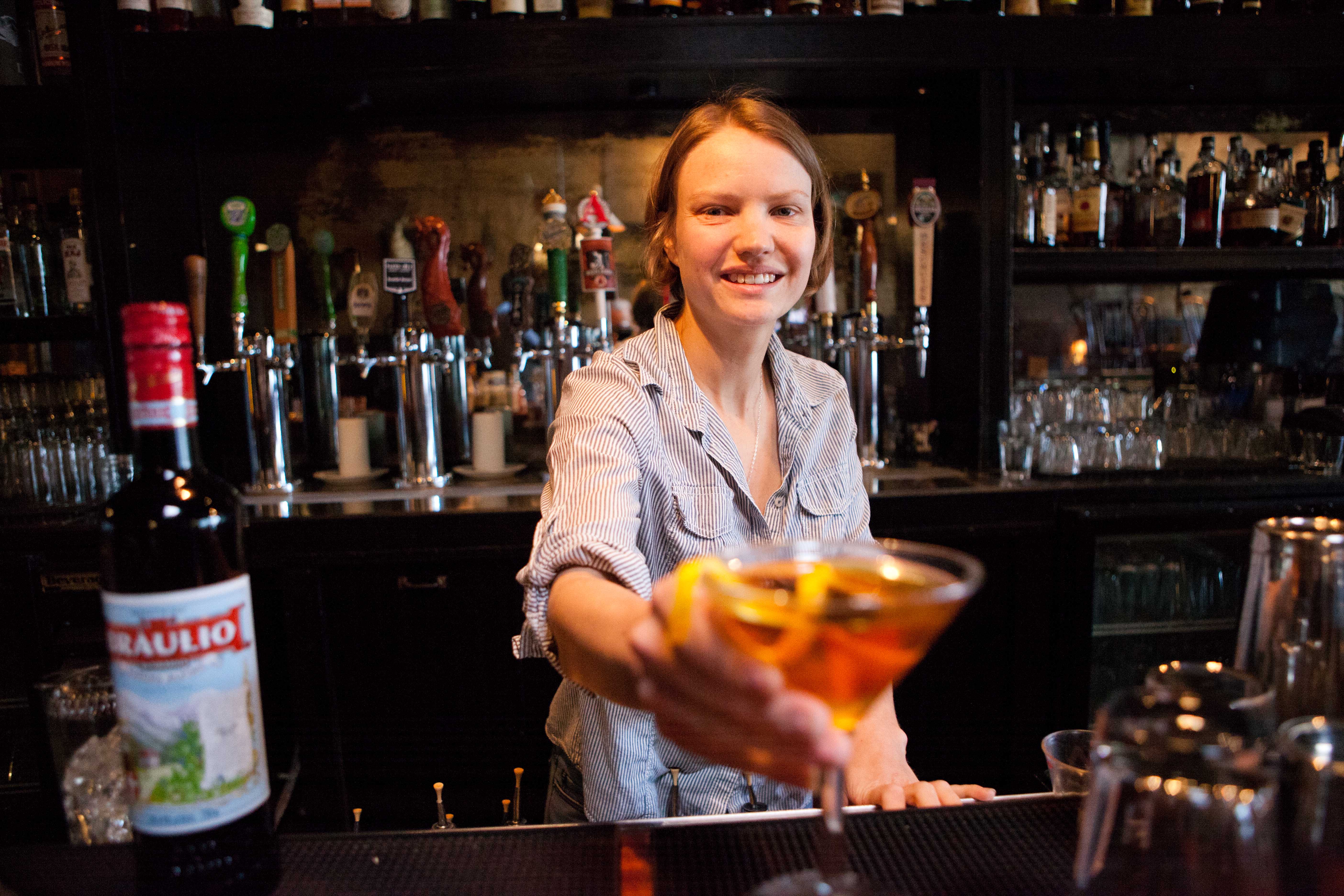 Marley Tomic Beard, a Boston transplant with a well-deserved reputation for creating incredible drinks using interesting combinations of spirits and flavors, has recently taken the role of bar manager at Smith, one of Linda Derschang's popular neighborhood watering holes on Capitol Hill. Marley began working at Licorous and Bathtub Gin shortly after moving to Seattle four years ago; loyal customers followed her as she continued to hone her skills at Spur, Golden Beetle and most recently, The Sexton. In her new position at Smith, Marley is busy establishing a new cocktail program, hiring new talent, and of course mixing up amazing libations.

How did you get your start in the cocktail world?

I was working at Eastern Standard [in Boston, MA]; that's where I cut my teeth as far as the cocktail scene goes. My friend and I had worked previously at a bar that was more like Smith — it was a neighborhood bar, driven towards regulars and beer. Then he got the job [at Eastern Standard] and brought me on. He was like "this is the direction you need to go in", and I was like "sure!" I had no idea what I was getting into.

I just got completely blown away with the new cocktail scene that was emerging. Eastern Standard, at the time, was one of only three bars doing cocktails in Boston. I was there for about 9 months and then decided to move out here. I came out to visit [Seattle] and fell in love with it.

What kind of bar is Smith?

The concept of Smith is definitely that neighborhood, very regular-driven business. When I got there, it was on the verge of having a cocktail culture. People were asking for it. The bartenders were asking for it, especially with Liberty down the street. But it wasn't quite there yet. It was definitely more beer focused. What I love about Smith is it's a place you can go every day without spending $100. It's your "I don't feel like cooking, I don't want a lot of rich food, I just want someone to put a beer in front of me who knows who I am" kind of place, which I love and totally thrive. I was brought in to develop the cocktail program but also make it streamlined so it's not unapproachable for people who have been going there a long time, people who are looking for that lower price-point; I'm not allowed to go over $10 on my cocktail menu. It's awesome and it's a challenge.

What are a few ideas you've brought to Smith since coming on board?

As a bar manager, I enjoy working as a collaborative team with my bartenders, so [on] our latest cocktail menu everybody got two cocktails. It was interesting to reign in people. I had to say, "Sorry guys, you're way out of price-point" and have them redevelop. So it was a very interesting teaching moment in a way.

We are actually doing cocktails on tap, that's part of Linda's wanting to keep it exciting and seasonal, and making it easy for the customer. We're making our own tonic syrup and we'll be doing $7 base spirit and on-tap tonic. I was just over [in Ballard] at Dandelion getting all my base ingredients for that. I'm really excited because it's something I've wanted to do for a while. 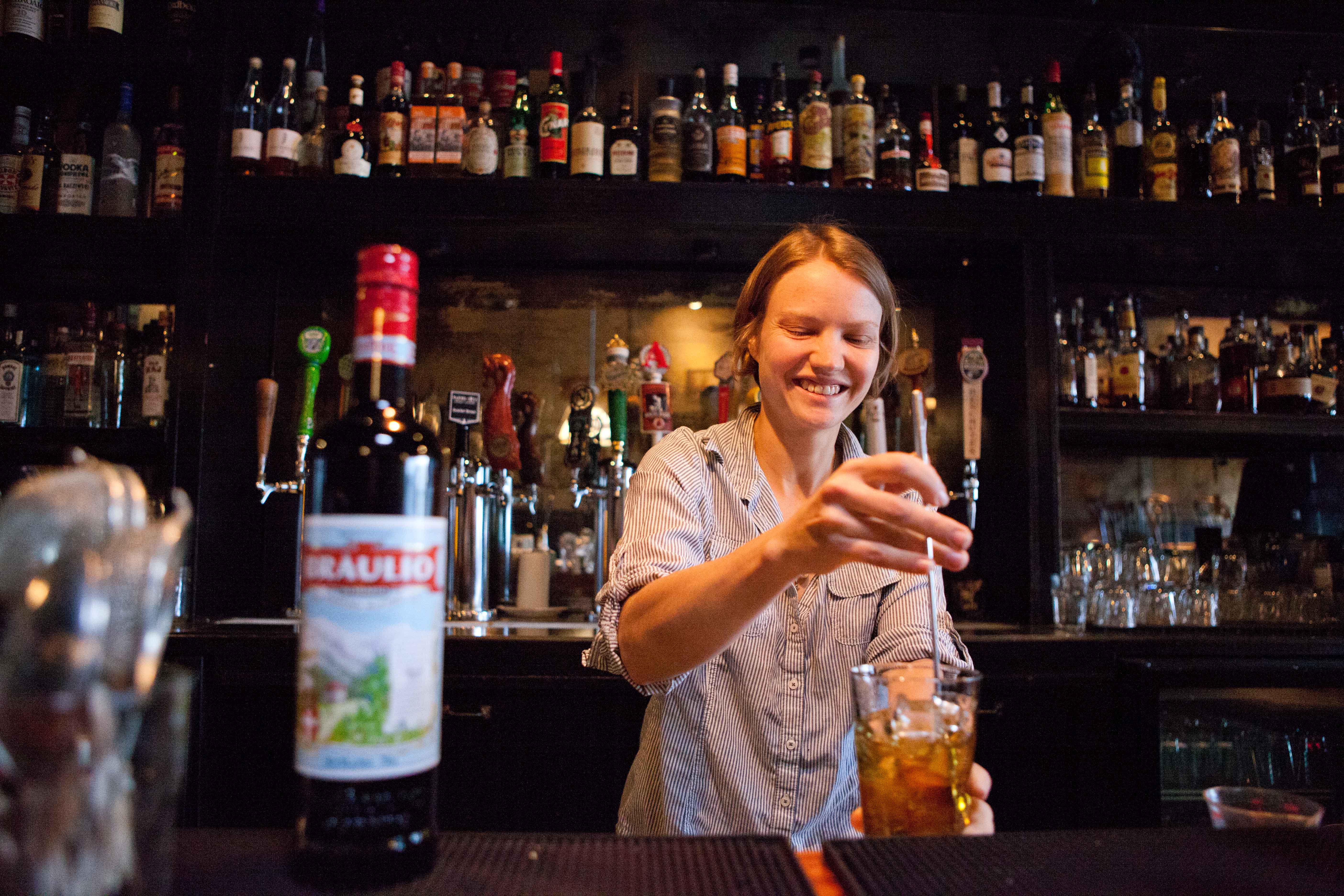 What is one of your favorite ingredients to mix with?

Batavia Arrack is my number one favorite. I love it. I put it in everything. I find that it can be chocolaty with certain ingredients. It can be very drying, but you get a lot of orange and grassy notes and smokiness. It's almost like the [Southeast] Asian version of mezcal in some way. I love the history that's involved with it. It was cheap and easy to make. It was the most readily available thing, more so than dry vermouth.

Tell me more about your tap cocktail program.

Right now we have the Rosie's Farmhouse on there, which is rye and Cynar and simple syrup. Just super easy drinking.

Erik Carlson from Bastille and I have talked about the whole pre-batching to make things fast, but also not lose the flavor. I love the idea of making something in big batches and still have it taste good because it was always something I had issues with when I pre-batched stuff. So it's interesting, on the science level. I also love the idea that you can use something like carbonation and it can change the mouthfeel.

Cocktails on tap remind me of getting cocktails made with the Perlini System.

Exactly, and this really allows that to happen without it being so expensive. I love the idea that we'll be able to make the tonic syrup and put it on tap and have it right there for people.

I had started thinking about it when I was at Sexton, it was something I was looking forward to doing there. Everyone has their attitudes towards it, I don't think it makes our job less. I think what's great about it is that it makes it more approachable for everybody. I think we bartenders forget how unapproachable we can be to the wider audience sometimes.

How do you get inspired to create new drinks?

I look at Imbibe. I use history books. Like for example I'm also looking to make my own aromatic/Angostura bitters right now, so I pulled out Jerry Thomas' Bon Vivant's [Companion] and looked at all the stuff. He's got shrubs in there and aromatic bitters and brandy tinctures and weird ingredients. I pulled The [Bartender's] Gin Compendium from Gary Regan because I wanted to look at all the different spices, he's got all the different flavoring agents of gin listed out and their components and their flavor profiles. So I look at that, I go online, I get an idea, I get inspired, then I do research on it.

I like reading things from New York a lot and seeing what they're doing in different bars. I love The PDT Cocktail Book, too. I met [Jim Meehan] at Eastern Standard, he was kind of my first "celebrity" I ever bartended for. He was down to earth and really chill, he didn't have that attitude. I've always followed what his crew was doing because of that. That interaction kind of shaped me in a way. I was so nervous to serve him and he was so great. It was awesome. 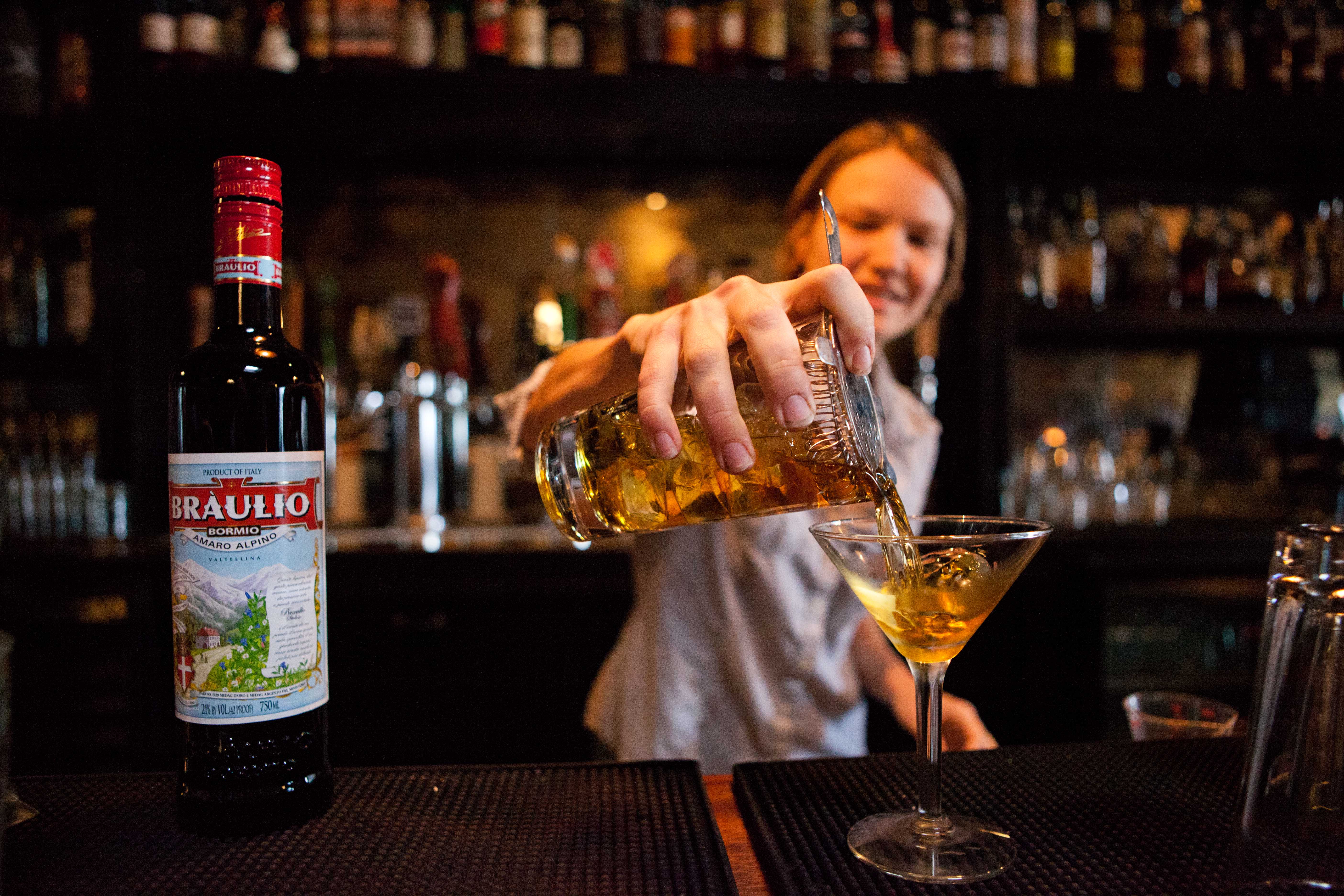 My favorite spot I've been to in the last couple of years was Rye in Brooklyn. I was there 3 or 4 years ago and it's still the first place that popped in my mind. They had cool ingredients. They had a smoked pineapple scotch cocktail on the menu and I was like, "Oh my god, I love that". And then the service — I wanted a Hanky Panky and the guy didn't know what it was and then he looked it up and carved a little heart in my orange peel. And the vibe — it's like an old saloon style bar.

What is the worst drink someone has ever ordered/could ever order from you?

[Someone ordered] a Blow Job my first week at Smith.

Anything with Baily's in it that curdles or is layered.

What was your drink of choice before you knew better?

It was always a "Happy Meal." (That's bar-speak for a Budweiser and a shot of Jim Beam).

Can you share a drink with us off your new spring menu at Smith?

Directions:
Chop rhubarb into 1/4" pieces.
Bring water and vinegar in a medium saucepan to a boil.
Add rhubarb and sugar. Stir until sugar is dissolved.
Over low heat, Cook for 20 minutes.
Pull off heat and cool to room temperature.
Strain rhubarb through a fine mesh strainer.
Discard rhubarb and store shrub in refrigerator or make drinks!