Recently, Eater asked readers to name the one food truck dish they couldn't live without, and the tipline and comments were flooded with responses. The suggestions ran the gamut from desserts, to spam sliders, to fish tacos to the amazing dish from the little known truck you might never have heard of. Yeah, that one.

Here now are 21 of Seattle's Must-Have Food Truck Favorites, as voted by readers, in alphabetical order. Those double listings down there? That simply means the dish got more than one mention (Where Ya At Matt and El Camion = list hogs). Is your favorite dish still missing? Shout it in the comments. 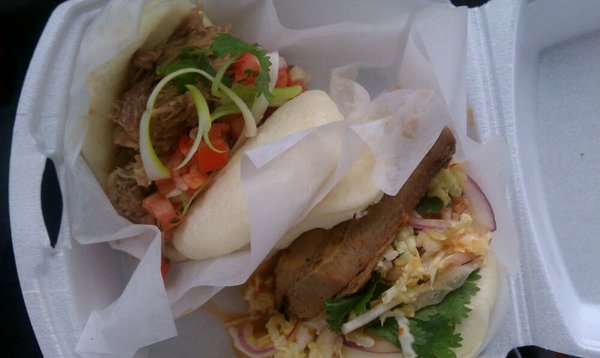 1. The Box:
Affordable Asian cuisine is what The Box is all about. Based in Kirkland, it's a lunch truck and catering company led by Reis Llaneza, formerly of Yarrow Bay Grill and Flo. What got props on this list is the pork belly hum bao ($2.75): slow braised in soy and mirin topped with a fresh slaw, served on a Chinese steamed bun. The Box's crispy savory-sweet karaage chicken also gets a shout out. [Photo Credit] 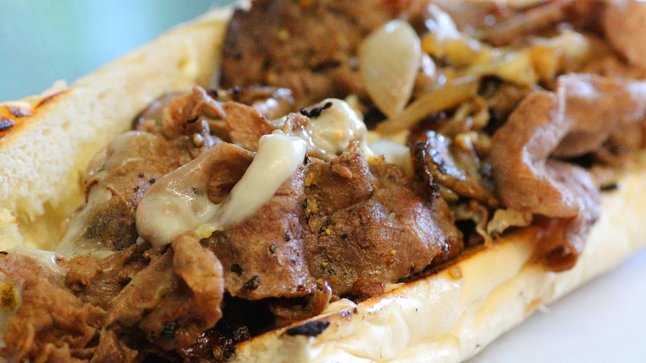 2. Charlie's Buns N' Stuff: There's lots of burgers coming out of this truck, but that's not what readers prefer. They want the cheesesteaks. The classic is eye round beef steak finished off with, grilled onions, mushrooms & provolone cheese ($8). "Generous portions and non corporate ketchup packets too," says one reader. [Photo Credit] 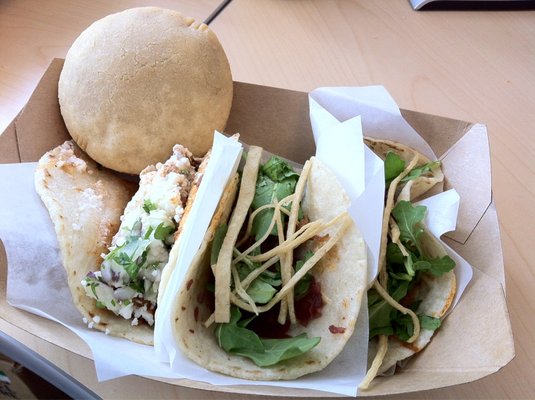 3. Contigo: "I'm in love with the chicken tacos from Contigo right now," says one reader, referring to the $2.50 tacos covered in black mole from this "modern Mexican" truck that also offers stuff like sweet potato and pecan gorditas. [Photo Credit] 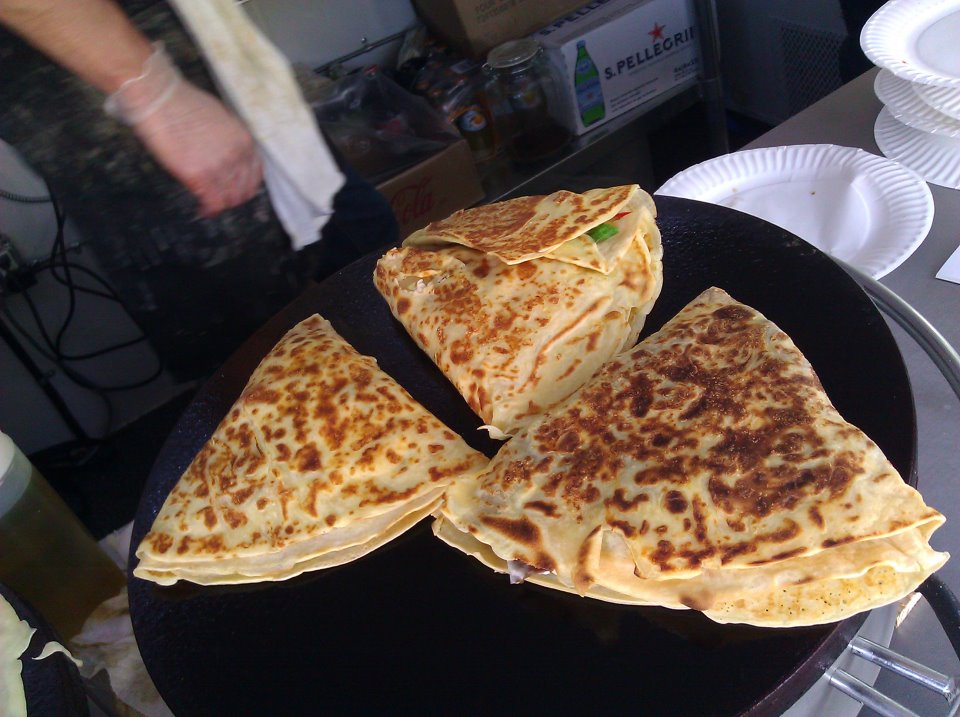 4. Crisp: Says one reader, "Crepes (any of 'em) from Crisp. The crepes are delicious and the dudes are the most entertaining of any truck personnel I've come across." The mobile creperie that prides itself on bringing top shelf ingredient-made crepes to neighborhoods across Seattle is working on a late night menu. [Photo Credit] 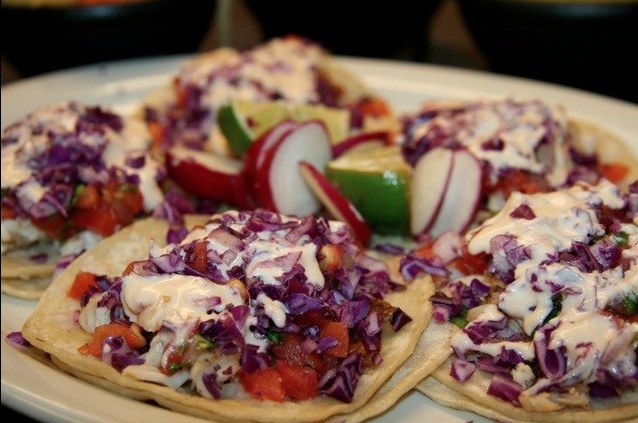 5. El Camion: This classic food truck in Seattle is famous for its street tacos, which readers apparently adore: "El Camion serves excellent, authentic lonchera street tacos," says one reader. Another El Camion fan points specifically to the white fish tacos, which are not breaded and served on corn tortillas with shredded cabbage, crema agria especial topped with pico de gallo and a lime for $2. [Photo Credit] 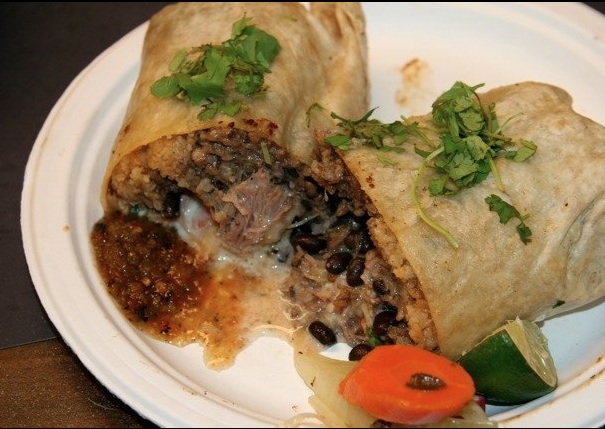 6. El Camion: Another EC dish to make the cut: "The Adobada (spicy pork) is amazing. By far the best burrito in Seattle." The burritos at El Camion are made with flour tortillas and stuffed with rice, black beans, sour cream, cheese and pico de gallo for less than $7. [Photo Credit] 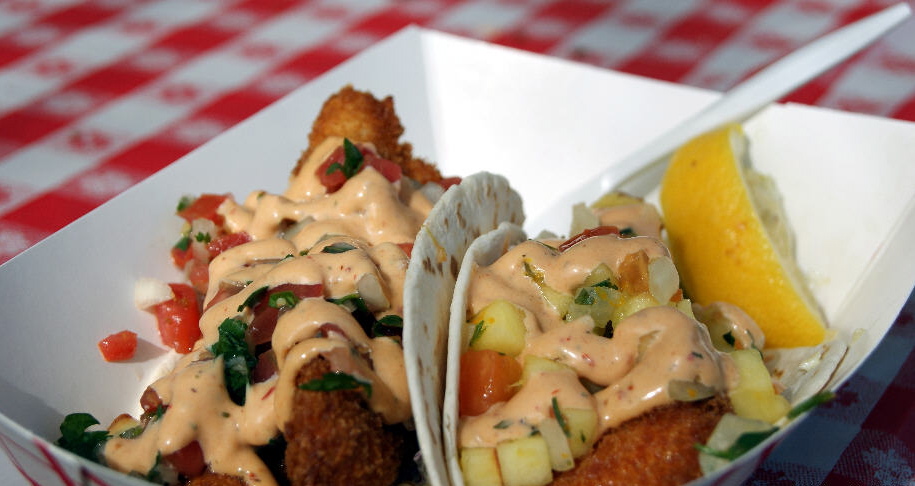 7. Fish Basket: This family-run business offers fish and chips, chowder, and other lovely seafood eats, but it's the tacos that readers crave. For $8.50, you get two Panko-style salmon filets on a bed of tartar slaw in flour tortillas topped with fresh apple and papaya salsa, chipotle ranch with lime and lemon wedges. The halibut tacos are a few bucks more, but equally worth the it. [Photo Credit] 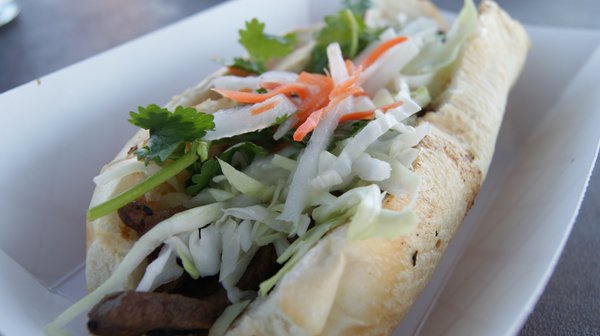 8. Fusion on the Run: As one reader put it of the short rib banh mi, "It can't be legal to get something that good for $8." The sandwich (that can also be filled with chicken, Kalua pork or veggies) comes with mayo, cucumber, jalapeno,slaw, cilantro, daikon and carrot. Fusion's boneless short rib tacos also got a nod. [Photo Credit] 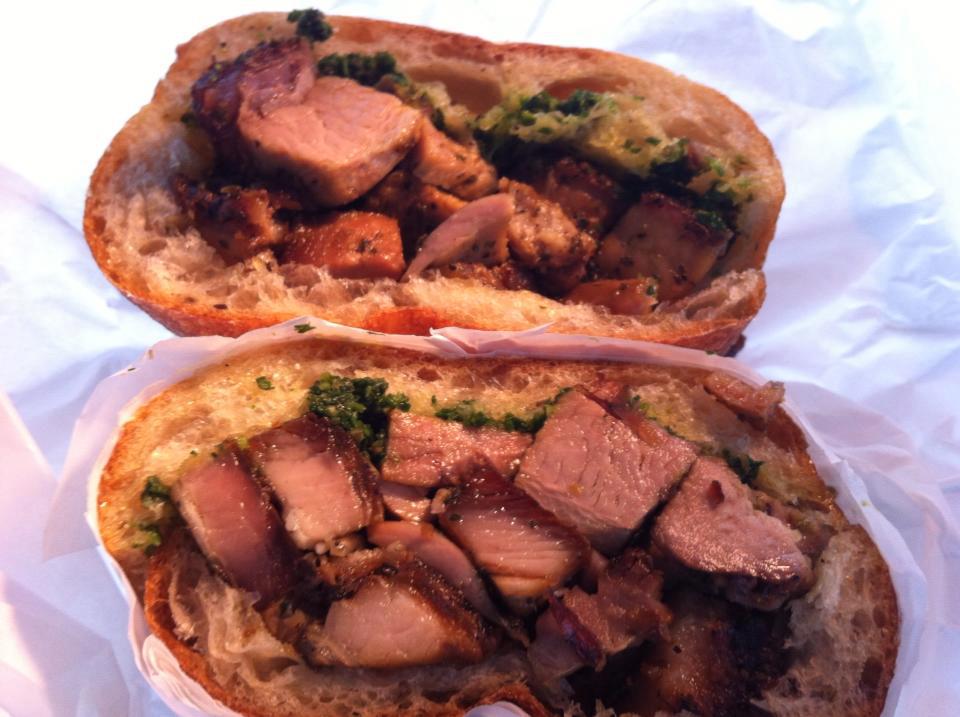 9. Gusta: The Italian sandwich food truck makes a mean meatball sandwich, but according to several readers, the porchetta can't be missed. And if you have room, order a rice crispy treat layered with smashed peanut butter M&Ms. [Photo Credit] 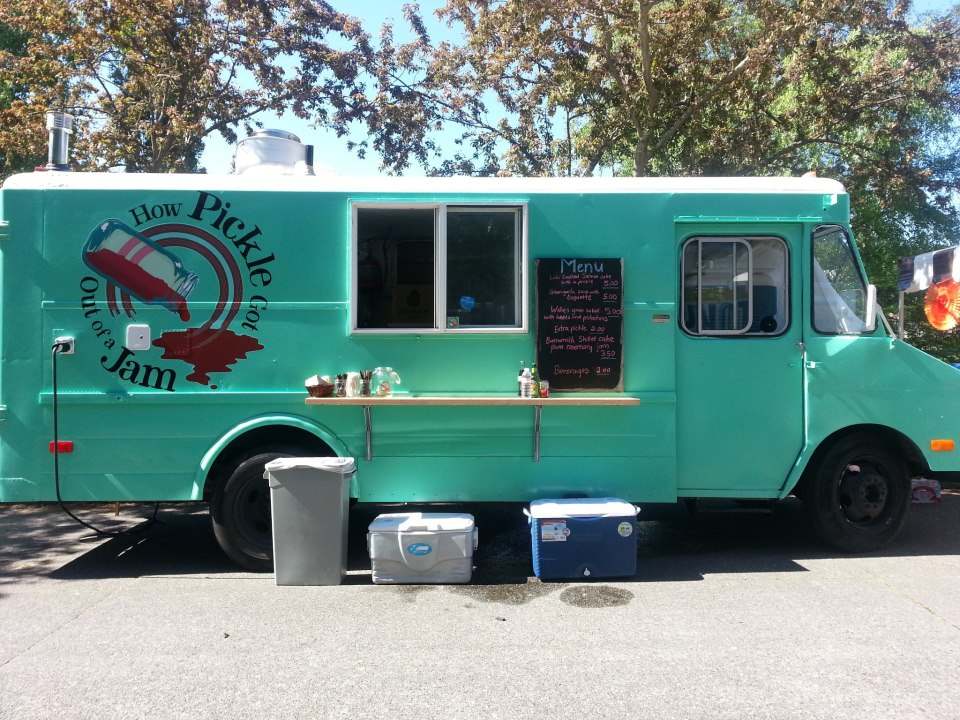 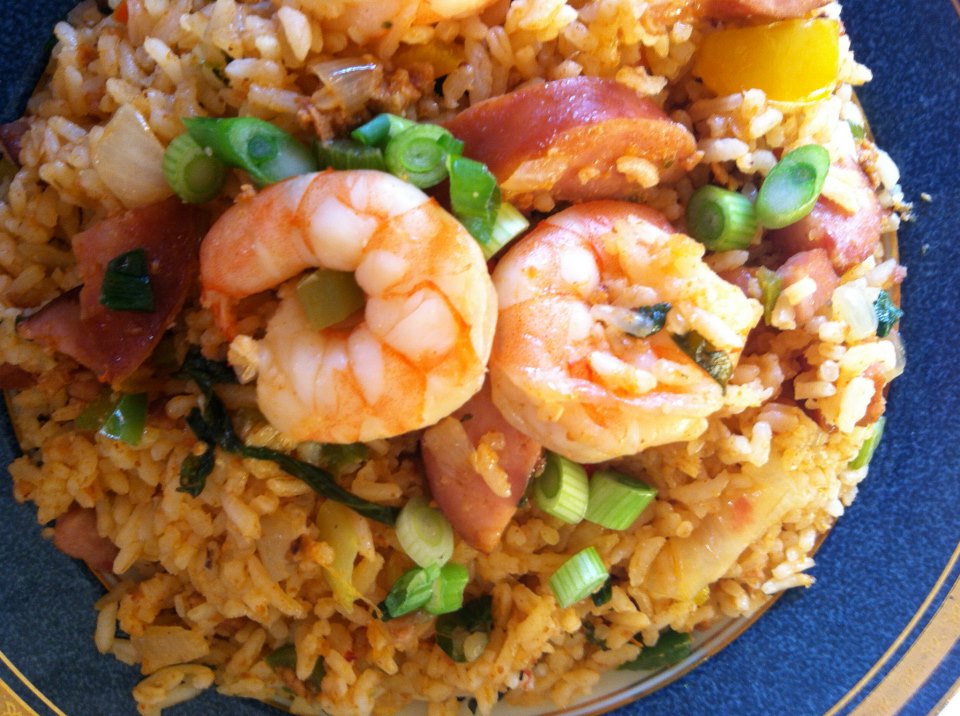 11. Jemil's Big Easy: "Anything at Jemil's," says one reader. "Jambalaya if I had to choose." The authentic mix of savory rice, beans, and sausage (with a nice hint of fire) goes down easy. A medium bowl is $6.99. [Photo Credit] 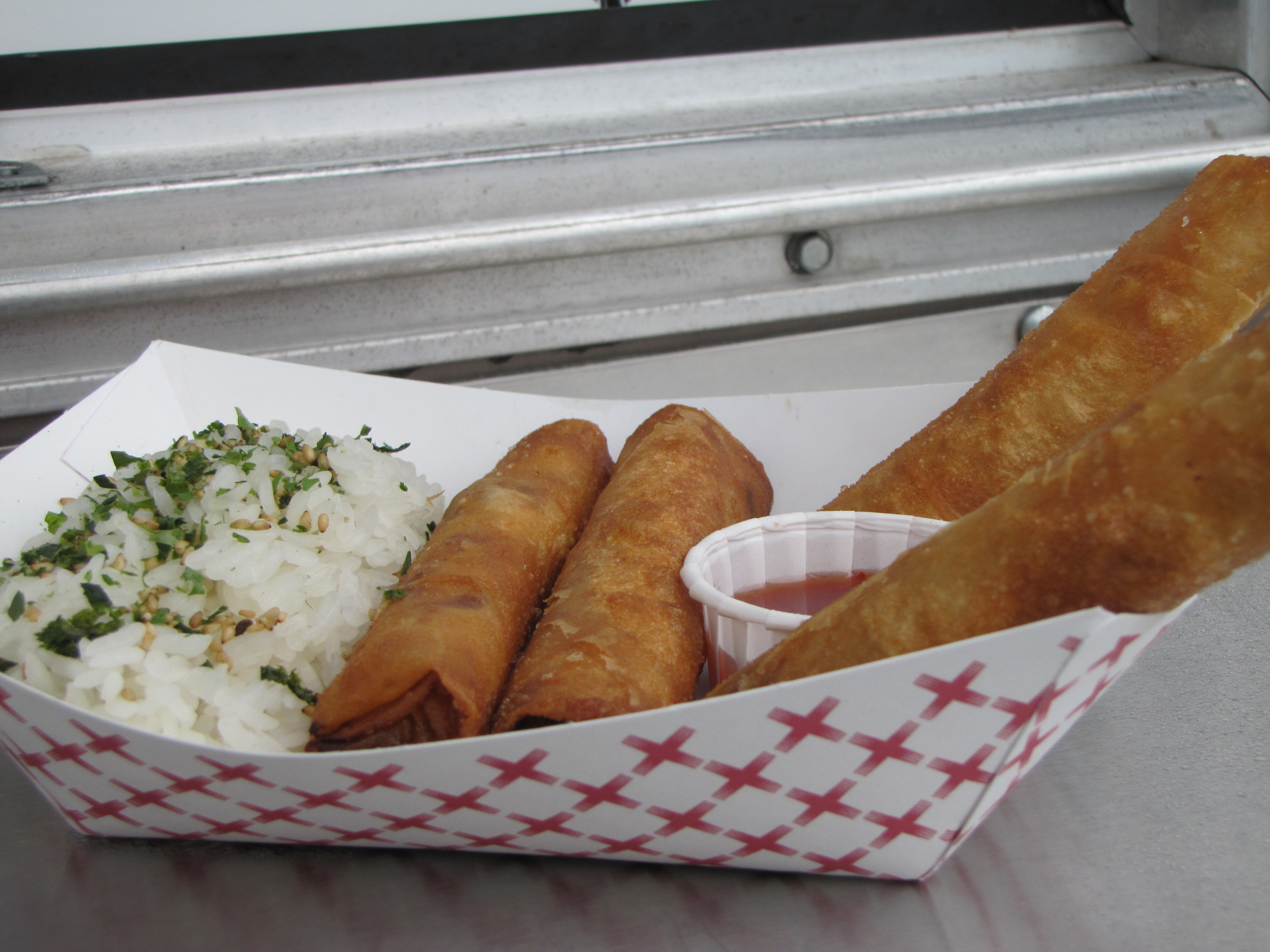 11. Lumpia World: These Filipino spring rolls make up the majority of the menu at this rolling Federal Way restaurant. They're filled with everything from ground steak to lemon grass chicken to ginger pork and sweet potato. A combo lunch box (pictured) starts at just $6. [Photo Credit] 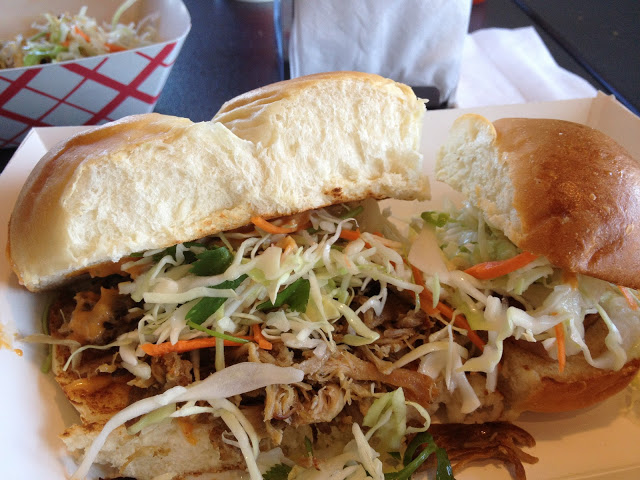 12. Marination: Marination gets a lot of love on this list (kimchi rice bowl, ginger miso chicken tacos), but none more so than for their sliders, both the SPAM and Kalua pork. For the rest of the Marination fans who said, "Anything from Marination," the assumption is that you're okay with this pick to represent your Aloha love? [Photo Credit] 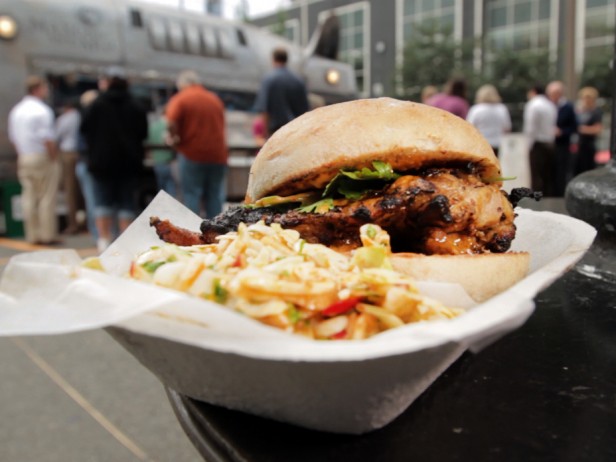 13. Maximus/Minimus: The grilled chicken sandwich from the urban assault pig (every city has one, right?) is so good, the Cooking Channel features the recipe. It comes with either chipotle or pesto mayo, and cheese curds and slaw are extra. And of course, a little Maximus "hurt" sauce doesn't hurt. [Photo Credit] 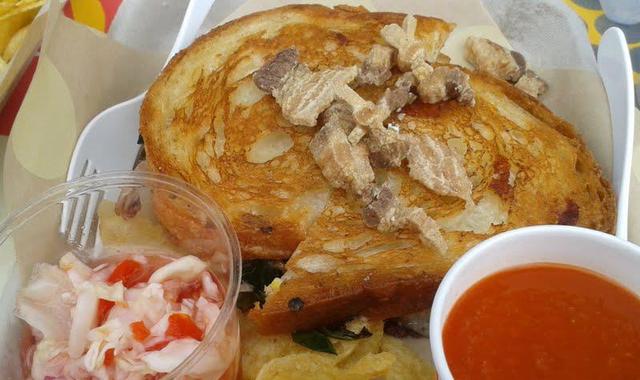 14. Monte Cristo: The gourmet mobile melt truck has a great deal of grilled sandwiches to choose from, but the one that made this list is the Big Messy Madness filled with duck confit, taleggio, fontina, and mozzarella cheese, braised greens, lemon aioli, and gingered rhubarb jam. And yes, there are cracklins on top. [Photo Credit] 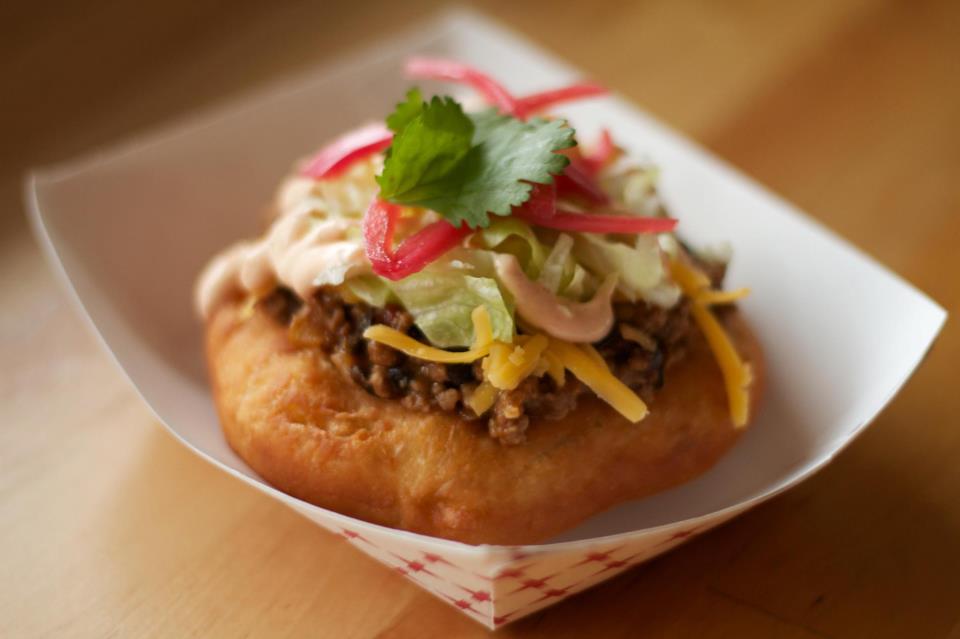 15. Off the Rez: The Native American-inspired cuisine from this truck is a definite favorite. The fry bread tacos are an absolute can't miss item for several readers. They're stuffed with all sorts of things, including chili (pictured), pulled pork and chicken. Who the eff doesn't like fry bread? Plus, the stuff makes for the one of the biggest food truck tacos you'll ever eat in Seattle. [Photo Credit] 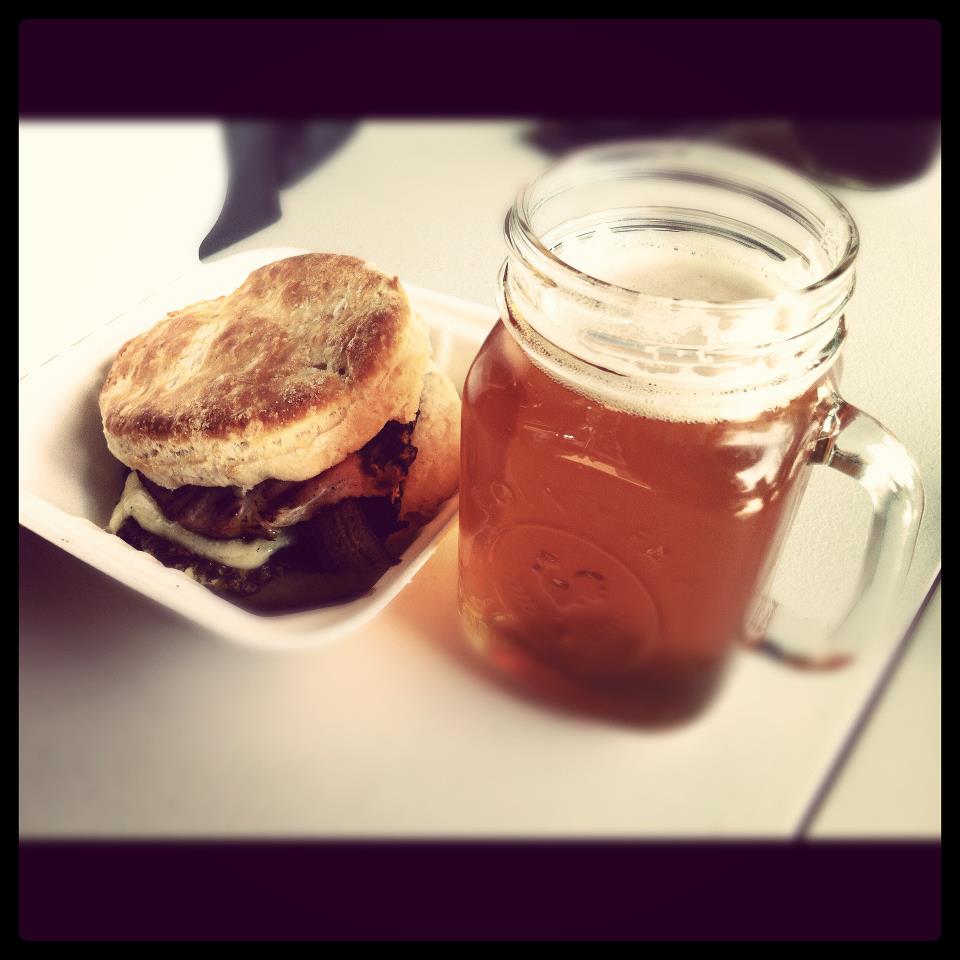 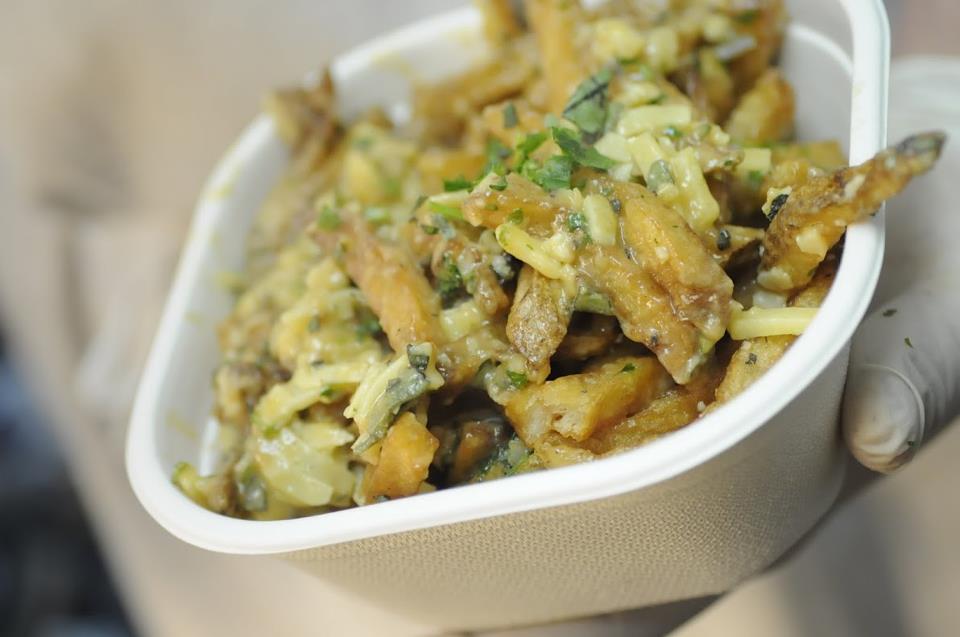 17. Skillet: Credited for launching the entire Seattle street food scene, it would be a shame if the airstream didn't make an appearance on this list, and it did with its poutine and burger. The Sunday brunch chicken and waffles also gets a nod. Classic choices. [Photo Credit] 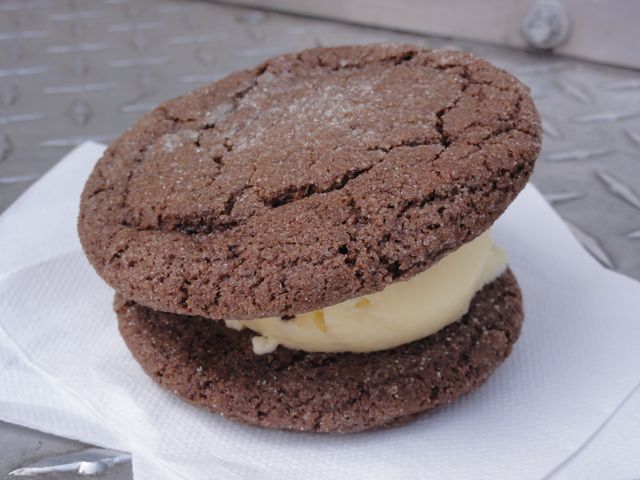 18. Street Treats: One of just two desserts to make this list, and for good reason, according to this reader who writes, "Street Treats has the best desserts and they make their own ice cream from scratch (REALLY from scratch)." [Photo Credit] 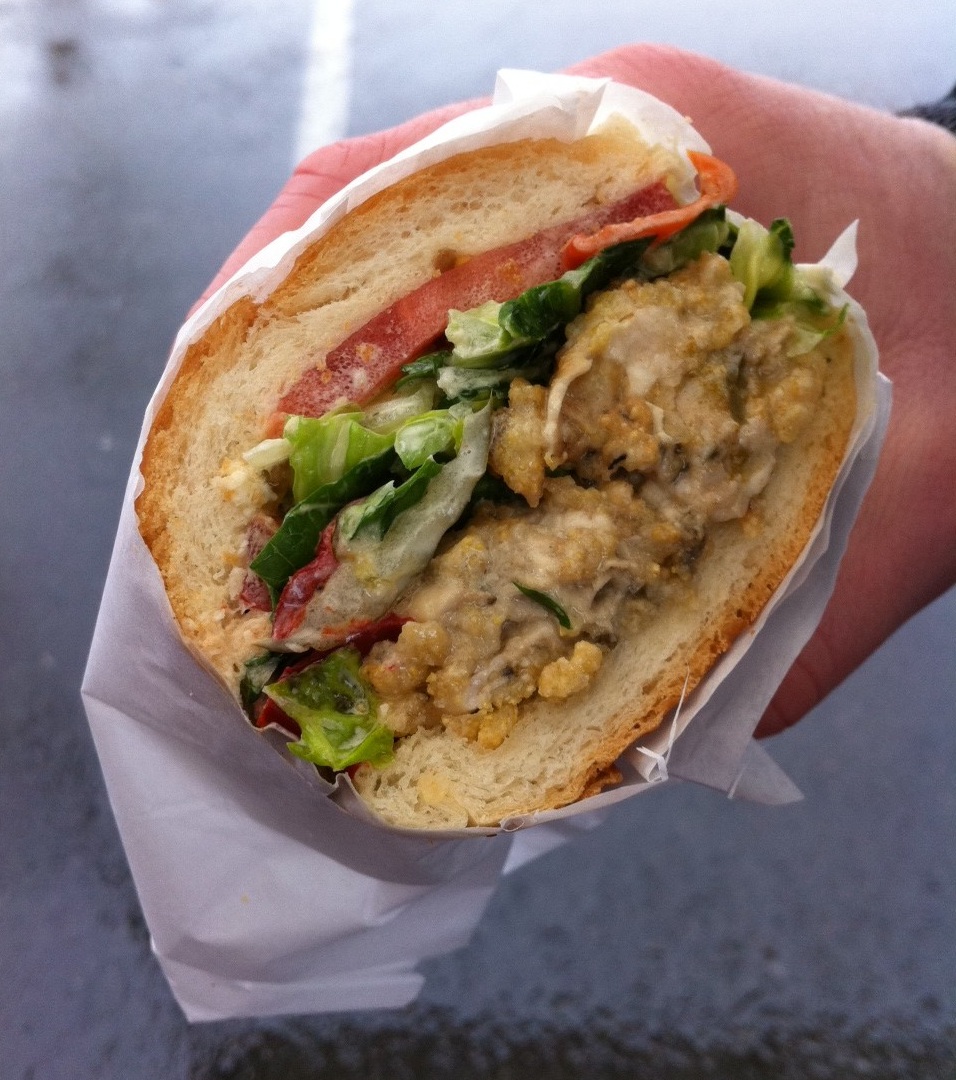 19. Where Ya At Matt: The only food truck to make the iconic sandwich list, the po boys at WYAM were by far the most recommended food truck dish, including the always popular oyster variety that is loaded with pickles, peppers and a ton of lightly fried oysters. [Photo: Photo Credit] 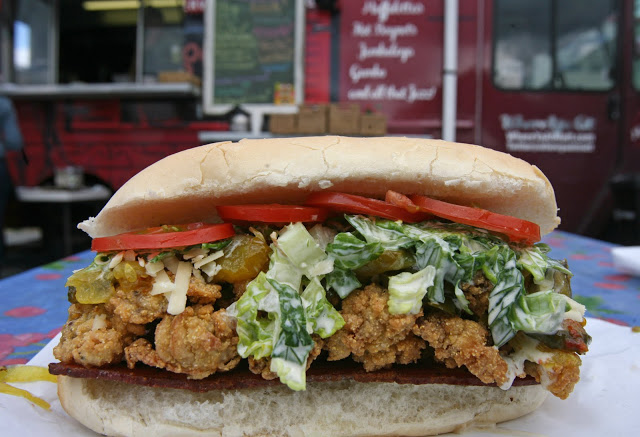 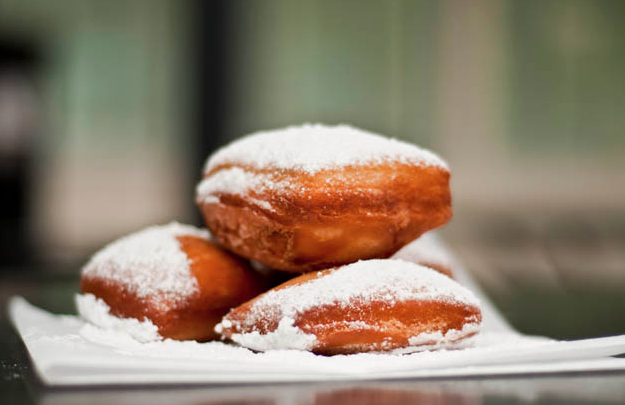 Where Ya At Matt: Desserts usually aren't much of a consideration when touting a must-have food truck dish, which is why only two made this list, including Matt's beignets. These French doughnuts are are made from deep-fried dough and sprinkled with powdered signature. Three per order. [Photo Credit]