Not many people know this, but Unicorn chef Josh Nebe has an affinity for things other than carnival food. He loves German cuisine and hopes to open his own restaurant someday. To get the ball rolling, he's launching a pop-up at Kedai Makan. Starting May 28 and every other Tuesday thereafter, you can try his cooking, which he describes as a lighter, more approachable version of German food.

So, instead of having these really heavy schnitzels and spaetzle covered in butter, we're going to do things like a pickled herring dish using local smelt and beets and a soft egg. I'm just trying to lighten German food up and make it more approachable and instead of having this archaic idea of German food that some people have, I'm trying to show off the food I grew up eating.

The name of Nebe's pop-up is Dackel, which means dachshund. 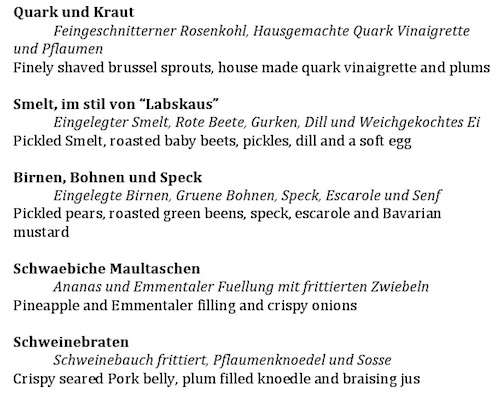 Nebe says he's going to keep the same hours as Kedai Makan "so there's no confusion and you can get some late-night snacks."

Those hours would be 4 pm to midnight. And don't forget, you can take your Dackel food next door to Montana Bar.