Share All sharing options for: Kevin Langmack: From Sunset Bowl to Sun Liquor

Welcome to The Barkeepers, a monthly column dedicated to the men and women who work behind some of Seattle's hottest bars. Each post is thoughtfully shaken and stirred by Wendy Miller, founder of the Seattle LUPEC chapter and author of the Seattle Cocktail Culture app. 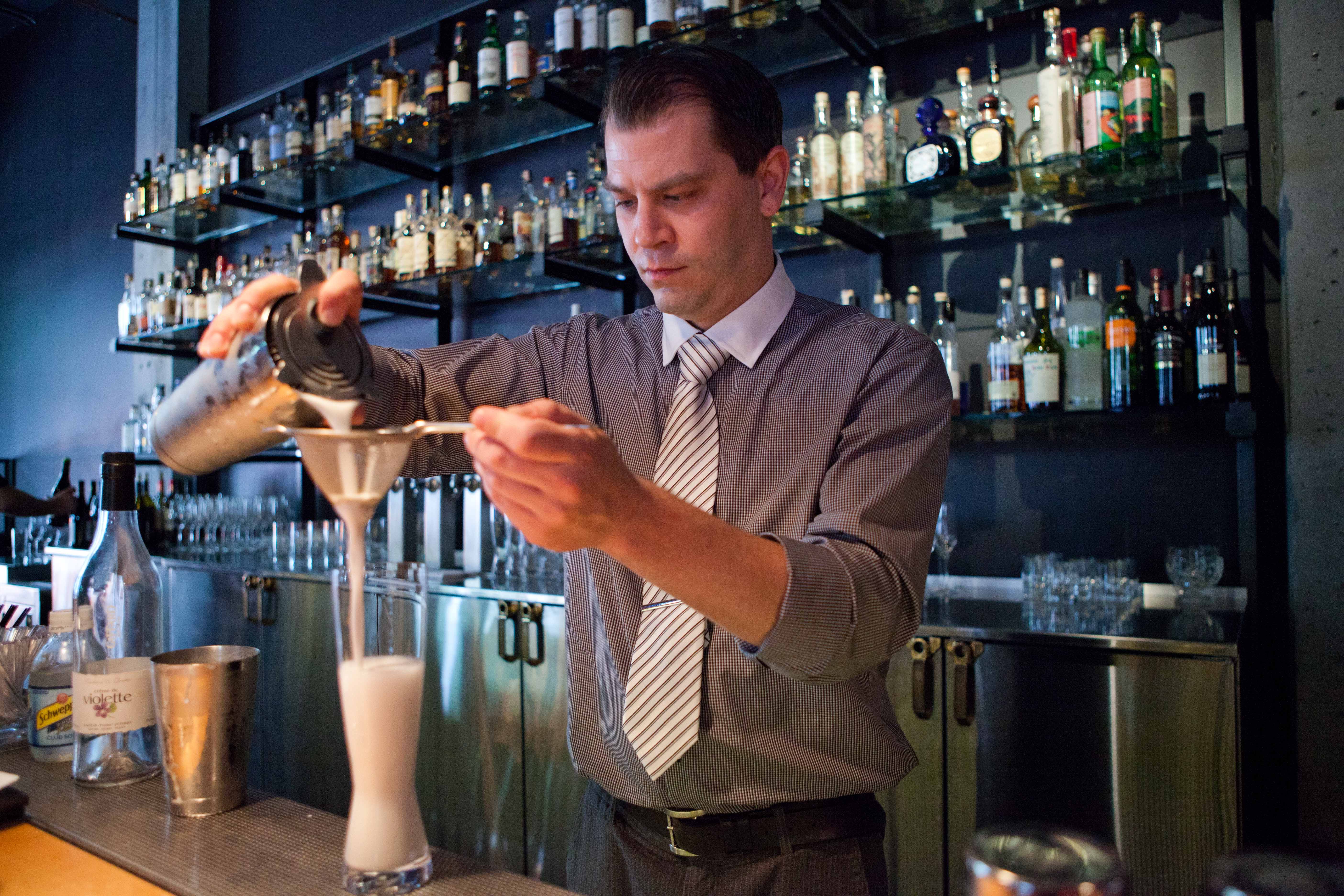 Five years ago, after the Sunset Bowl closed, Kevin Langmack found himself working the door at the original Sun Liquor. From there, he moved behind the bar and has gone on to create, shake and stir countless delicious cocktails while working at some of Seattle's best bars. Currently, Langmack splits his time between Sun Liquor Distillery (Saturdays and Mondays during the day) and Vessel (Tuesdays, Thursdays, Saturdays and Sundays).

Here, Kevin speaks about how he ended up working in a bowling alley, how making cheap drinks helped his career, and the need to actively create new and interesting libations for Vessel.

How did you originally start bartending?
Kind of by accident. I was running an online merchandising company for bands and record labels; I played music for a lot of years, and that ended up...ending. At that time I was still living out in Ballard and I used to go to Sunset Bowl all the time and hang out there. I was bowling one day and just talking to my server and was like "What does it take to work here?" They were like "We just keep a list of people who we like and whenever something opens up we give people a call." I was like "Cool, I'm unemployed right now. Put me on that list and if something opens up, I'd love to come work here." The next day a cocktail server walked out. They gave me a call and I started serving. Did that for about a year and then transitioned into bartending; did that for about a year and a half up until they closed.

When that was closing down, I moved up here to [Capitol Hill] and found the original Sun Liquor. I just got to be really good friends with Erik [Chapman] and Will [Ritthaler]. Erik needed a door guy so I went and worked doors there for six months. And then one of the bartenders got let go and they were like, "You're the only other person on the staff with bartending experience. How would you feel about learning how to make cocktails?" So, Sun Liquor was my first real cocktail bar.

It's really good to have both sides of the experience: doing volume, doing cheap drinks, doing cocktails and geeking out about stuff. It's nice to have both ends.

When you started at Sun Liquor, how did you go about learning to make cocktails?

There was a bar book behind the bar that I went through, and everything we had the ingredients for I put down on a card and just went and made everything. 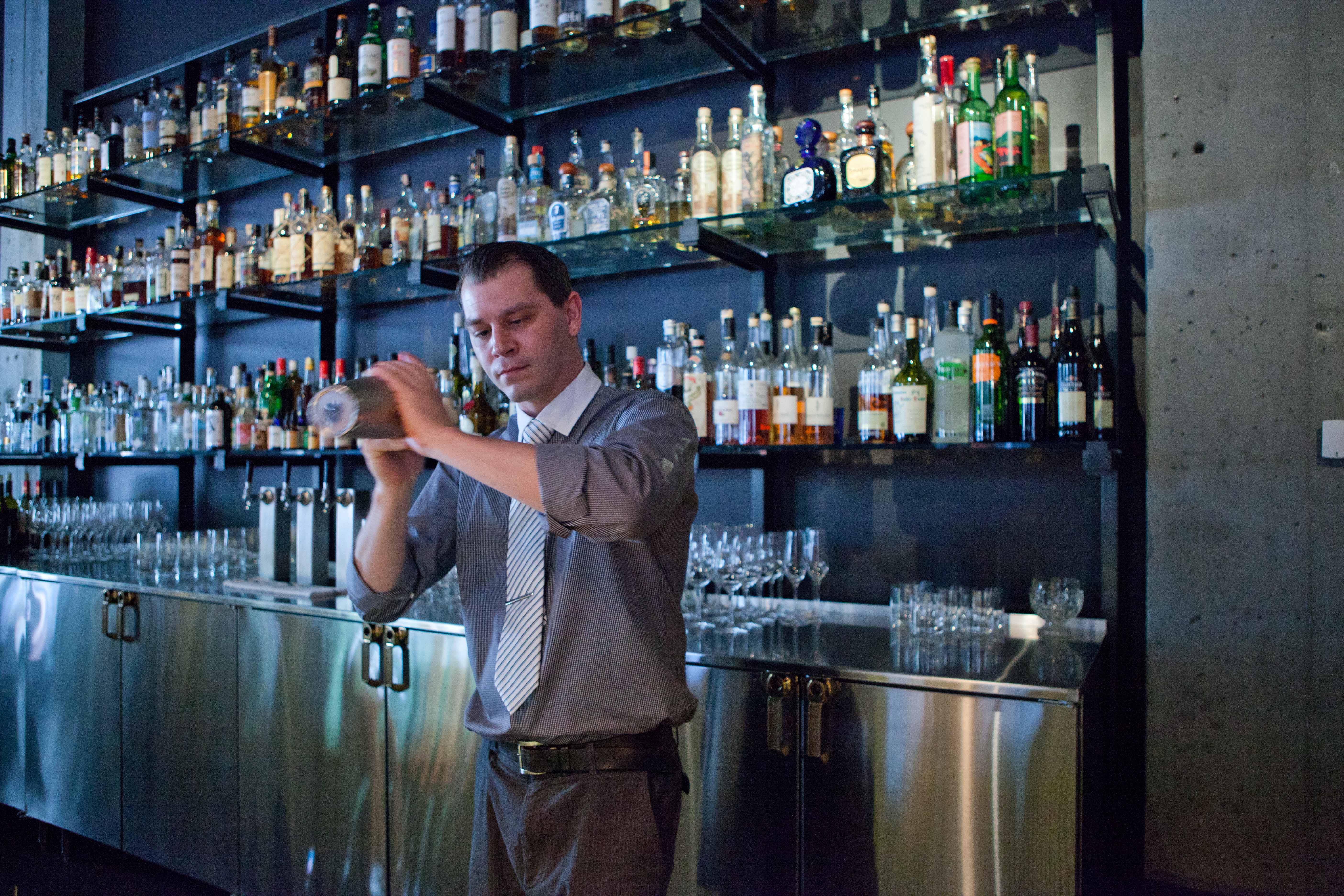 How did you find yourself working at so many of Seattle's best bars?

I was at Sun after the bowling alley closed. Dave Nelson was a regular in the neighborhood. He got involved with the Spur project and knew I was looking around for extra bar shifts. So we teamed up and I was the opening bartender at Spur. Did that and Sun. Then I did Tavern Law. When I went to work there, I was doing all three. I ended up leaving all three of those places to work at Vessel on 5th Avenue and worked there until they closed. Then I got hooked up to work at Knee High until Vessel reopened. And now back at Sun. [People are] like, "Man, you've worked everywhere!"

How do you describe Vessel to a first-timer?

We definitely try to educate; all the old attitude of Vessel is pretty much out the window, and that's been a nice change. You know, no vodkas on the back bar...someone would come and order and it was like, "You shouldn't be ordering that drink when you go out in public." That was five years ago when it got started and the entire restaurant and bar scene is now different. That was definitely a stance that was taken that caused some change in people. I know for me, I would go in there as a customer, I had my eyes opened. I was like, "Wow, this is something different!" Now, getting them to sit down and be like, "Whoa, what are you doing there with that knife and block of ice?" We do this kind of bartending, intricate, fun stuff. We love talking to people about booze. It's our passion and we don't mind sharing it.

How do you decide what to put on your menus at Vessel?

I'm there probably the most of any of the bartenders now. When it started I had lots of recipes from other bars or ideas I wanted to put on, so I've been able to put those on. And then, with all the stuff we have it's like, "Oh, I've never played around with this ingredient!" I play around with it and see what sells. One of our servers went on a boat cruise one day before shift, and came in with a couple of coconuts and pineapples. So we juiced the pineapples and got the coconut water and made fun drinks. We play around with what we have on hand. It's all over the board.

What products have you been playing with lately?

All the Giffard stuff, which are some of the best liqueurs. [And we just] got a bunch of really random new amaros. Since [Initiative] 1183 went through and all the liquor laws changed, some of the smaller distributors are bringing in fun new stuff. Like Vinum is bringing in tons of great stuff and we have a really great partnership with them. They've been bringing in a bunch of amaros and stuff the state had never seen.

How often do you change the menu?

A lot of time it's "What do we have enough of?" Like, the Root Beer Float that I've been doing, it's been so popular, I will run it on a Saturday night and we'll sell out of the gelato so I can't run it on Sunday. I gotta run a different menu or I have to print a new one with one different drink, which I try not to do. I have a couple standard menus that I rotate through that I have different drinks on, but also it's really easy just to go upstairs and print out 20 new menus. I'll go through cycles where it's like standard drinks that I'll put on for a week or two and then I'll be like, "I'm going to come up with six new drinks!" and I'll come up with six brand new drinks. 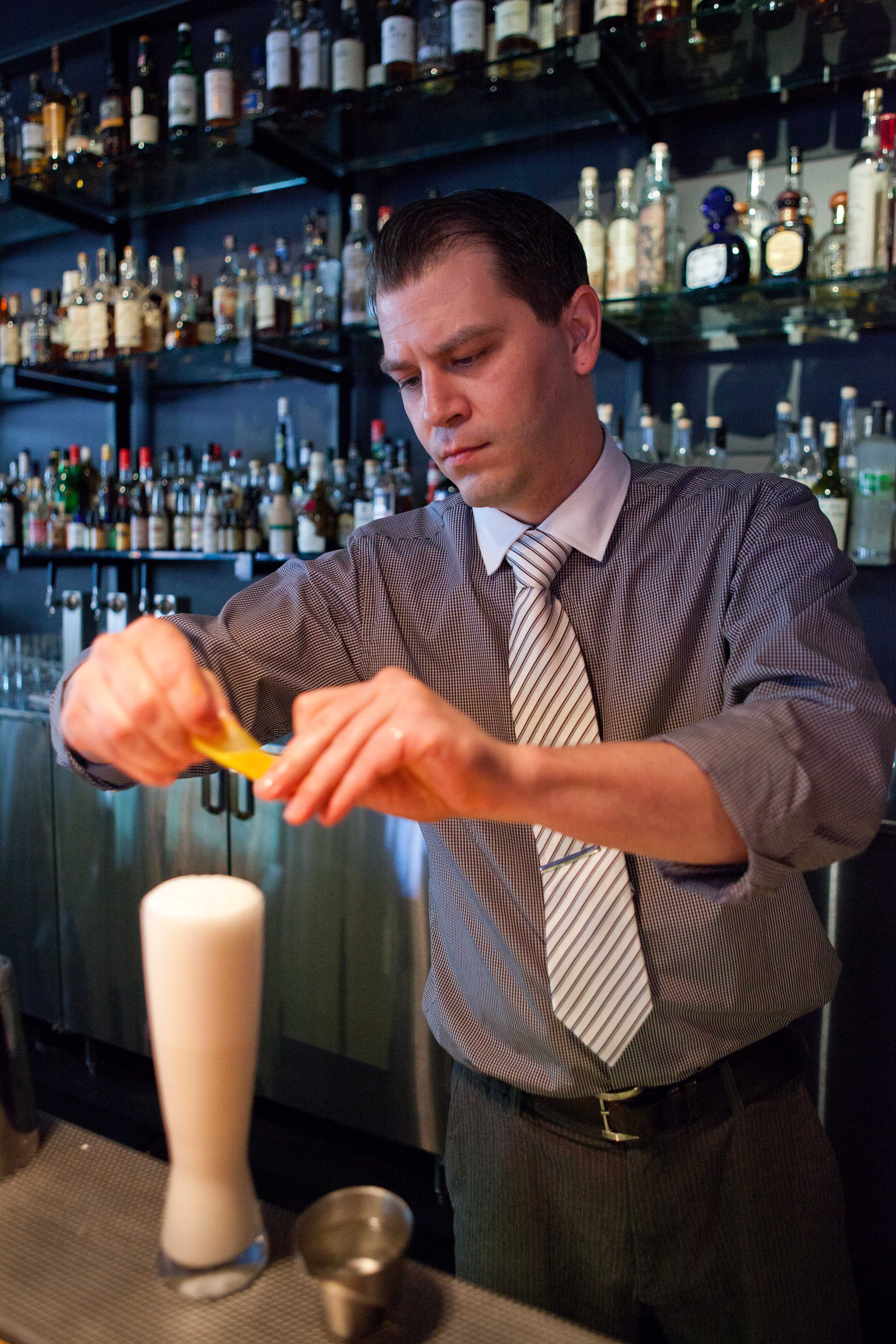 If someone opened a cupboard and saw an ingredient and said, 'Oh, that 's totally Kevin,' what would it be?

I keep bendy straws in the cabinet.

What's the best time to go to Vessel, if someone wants to sit up at the bar and chat with the bartenders?

Earlier in the week, or later on in the evening after 9 pm.

What is your go-to spirit?

What are some current cocktail trends that you're seeing?

I know a lot of people are geeking out about the ice. We make 300-pound blocks that we break down and use behind the bar. People aren't used to that. And where we are in downtown, we get a lot of visiting people. Somebody comes in and asks for a Scotch on the rocks and we put it on a nice big cube of ice. People are fingering it and saying, "I have never seen clear ice before." It's a little geeky touch. Shrubs are big right now, which is great. Citrusy drinks with soda or champagne or ginger beer or tonic [with shrubs]. Mezcal and tequilas are really popular right now. It's a lot of constant learning. Learning via drinking, darn it!

Going to PDT in New York last year was really awesome, it was a fantastic time. Really good energy, gorgeous decor, really good vibe. I had met [bartender] Jim Meehan previously so he set us up with reservations.

Teardrop down in Portland has always been one of my favorites. [Bartender] Daniel [Shoemaker]'s whole housemade bitters and tinctures program, when I saw that for the first time, was revolutionary.

I like getting out of town where you can get a different prospective on cocktails. Drink in Boston was really cool. I liked that they had just one guy doing block ice, chipping off per order. You see things you haven't seen before. It's not just one thing — it's just taking little bits and pieces.

I'd love to see Eric Castro's new bar [Polite Provisions in San Diego, CA], I'd like to see Anvil in Houston, I still haven't gone out drinking in San Francisco, so there's tons of places there, that will be a trip in the near future.

What was your drink of choice before you knew better?

Lots of vodka tonics, White Russians, a lot of drop shots — cherry bombs from Casey Robison back when he was still at Clever Dunne's.

Can you share the drink you made for me the first month Vessel was open?

By Any Other Name

Stirred [over ice, strain], served up with a lemon zest.