Running a restaurant isn't easy. Add to that a novice restaurateur and an iconic dive bar and you're either getting a recipe for success or utter failure. In Dave Meinert's case, it's the former. He assumed ownership of The 5 Point Cafe more than three years ago and has since turned it into a legit place to sit down and dine. And, yes, still get wasted on stiff drinks (but now, with pull tabs!). Continuing with Greasy Spoons Week 2013, Meinert, who also recently opened Lost Lake Cafe on Capitol Hill and co-owns its neighbor Big Mario's, takes time out to chat at the spot that he's been drunk on for nearly two decades.

What made you want to take over this place?
My girlfriend and I had a vision for a long time that someday when I was no longer working in the music business that we would get a diner somewhere. We actually met here 17 years ago. And then suddenly this became available, so we figured out a way to get it. We both love the place — I used to hang out here, she worked here for years.

What was her job here?
She was a waitress and she worked here on-and-off and at the Mecca on-and-off, and some other places.

What's this music business you speak of?
My real job, I say jokingly, is I have a band management company. We manage The Lumineers, Hey Marseilles, and I've managed different bands since the early 90s. I got into the bar business like eight years ago (with The Mirabeau Room). So, you know, I came up and got into [The 5 Point] and I really got in and ran it and I love the diner culture. I love the diner culture in here, but when I started working in it everyday I loved it even more, and it was like, "God, we gotta do this on Capitol Hill." 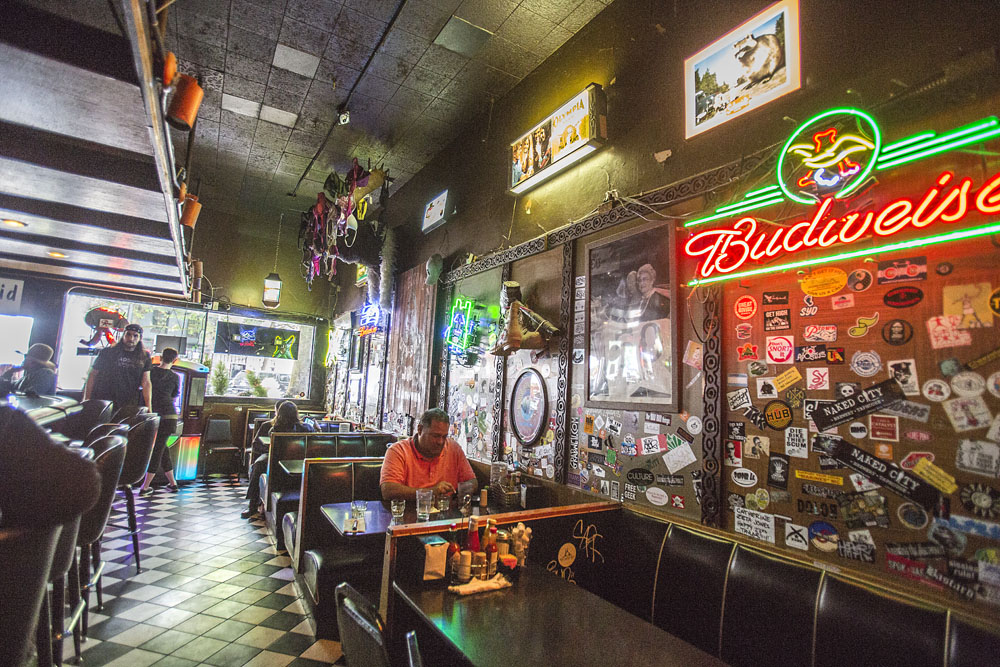 What is it about the whole diner culture that appeals to you?
It's kind of a dive-bar diner. I think one, it's a neighborhood place and it's also a place that is kind of without pretention. Everybody comes here. We get politicians and billionaires and bands, artists and musicians and drug dealers and prostitutes. It's people from the neighborhood and tourists, but everybody seems to come in and feel comfortable. It's a very casual kind of place. And then being 24-hours, it's just kind of fun to see the whole change of the guard all day long. I just love that culture. People hang out, they talk, they have great conversations.

What's changed with this place since you took it over?
Not a lot. We upgraded the food a little bit. Diners in general have, I think, over time been able to replace homemade items with frozen, pre-made items and a lot of diners do that. So we went back to mostly homemade stuff. The chicken-fried steak, when we bought it, was like a frozen pre-made chicken-fried steak and now we make them all — that sort of thing. That was part of it, another was just cleaning it. We replaced the floors and then the rest is back-end — I put in a POS (point of sale), added pull-tabs and fixed kitchen equipment and ran it well. Other than that, we kept a lot of the staff — there's staff that's worked here for 17 years — and kind of kept the attitude and menu. Oh, and we added outdoor seating, which is super popular and people like it. 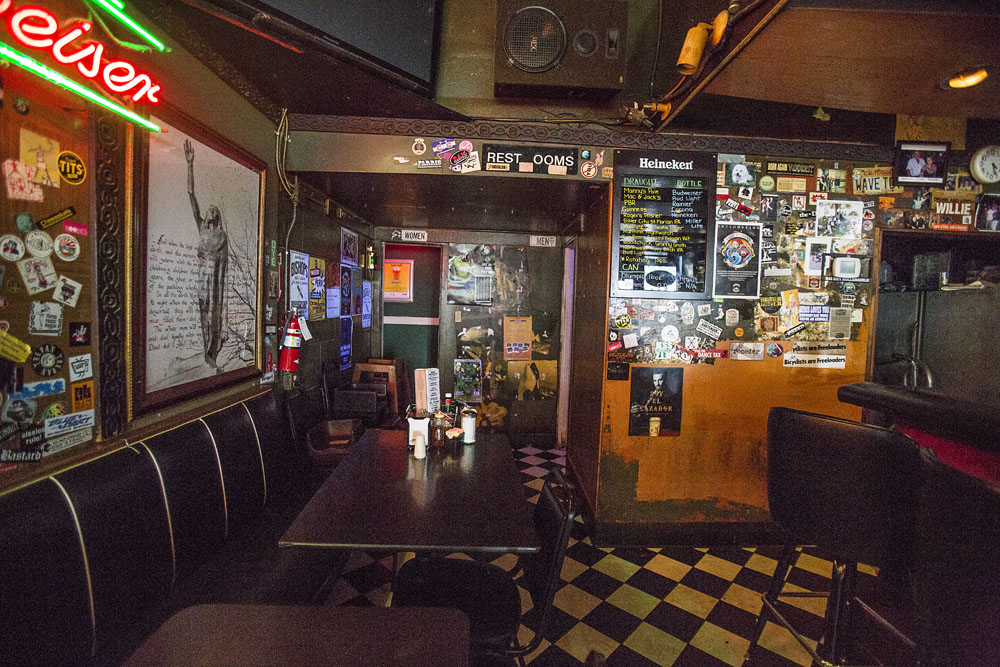 Is there anything in this place you'd never touch?
We really didn't touch much, it's interesting. The decor is the same, the checkered floors are the same, the purple wall; I would touch that, but I can't decide what to do with it, so I don't think about it. The periscope in the mens bathroom I would never touch (laughs). And the moose head with the bras.

What's the story with the bras?
What you can't see is all the photos of women's boobs behind the bar. And so they're related (laughs). There's a camera back there and people...yeah. So, just bartenders will snap the photos.

Are most women really trashed when they do that?
Yeah, yeah. I hope so! 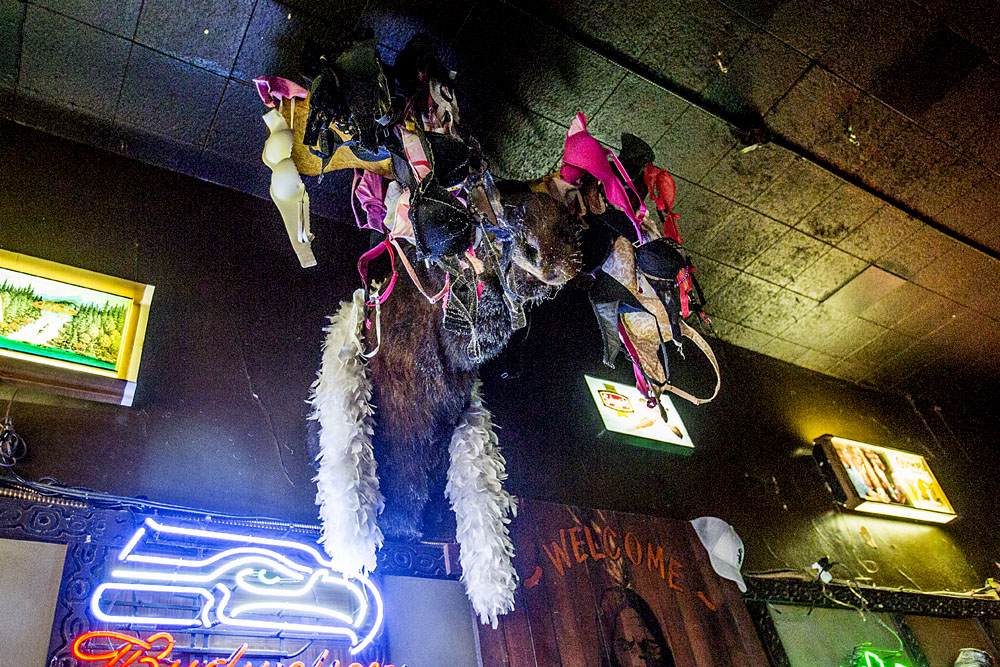 What else in The 5 Point has a significant story behind it?
There's some stuff over on the other side (the bar) like a big pair of fishing boots on the wall that were Dick's, the old owner. I'm sure there's all sorts of stuff I don't even know the stories to. You'll see some bumperstickers, "Bicyclists are freeloaders." Dick, who's kind of the infamous owner, he hated bicyclists (laughs).

Because?
You know. He was a cranky old guy.

What's his story?
He died in 2001. His dad opened [The 5 Point] and then he took it over in like 1975 and then he owned it until he died and then another couple had it for six years. That didn't work out for them. He was a cantankerous, funny — I don't know how to describe him. He had a boat, and old Chris Craft, that all the tie-downs and things on it were gold-plated. He did things like...he grew up obviously around here because his parents owned this, and there was a point when people wanted to put in a playground in a parking lot that the city owned on Third and Bell, which is now a dog park. And the city refused to because they said no kids in the regrade. And he was like, "Fuck, I grew up here and there's kids all over," and they wouldn't do it and they got into this huge fight. One day, he bought thousands of dollars worth of playground equipment and at midnight, he trucked it all over there and installed it himself. He just did hilarious stuff. He got in trouble with the city because when they put parking meters in Belltown, he had some of the younger waitresses wear bikinis and rollerskates and go around with buckets of quarters and when they expired, they'd plug the meters so [drivers] wouldn't get tickets and then leave a little coupon for The 5 Point on the car window. Of course, the city got really mad because they couldn't give out parking tickets.

What's the craziest thing you've ever seen in here?
I haven't seen that much crazy stuff. You know, there's an occasional fight. There's a story — the bartenders can tell way better stories — but there was one guy who came in without legs on a skateboard and he pulled himself up to the bar, sat himself down on the bar seat and proceeded to drink a lot and then had to go to the bathroom, so he got down and was gone for about half an hour. The bartender was like, "Where'd he go?" so he looks in the bathroom. The guy had gotten really drunk and...in the men's bathroom, you basically pee on the wall and there's a trough at the bottom, on the floor basically...and he had fallen in and couldn't get out. So that was crazy. 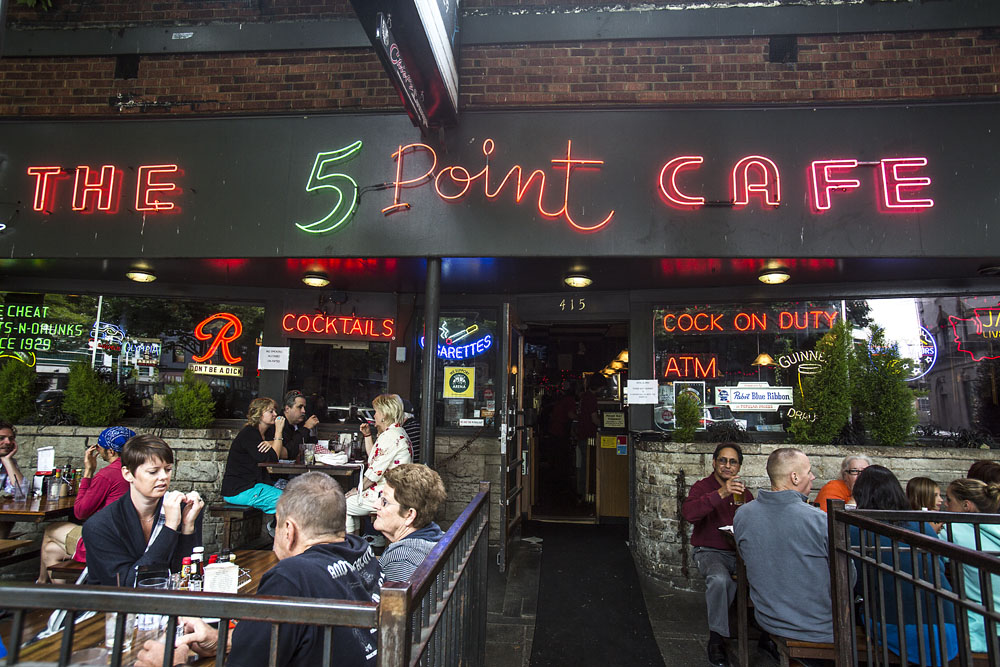 Derek: I should have started a book right when I started here 13 years ago. One of the craziest ones was, "Derek, you gotta go into the bathroom right away," which is always scary. So I go in there and a guy is smearing shit all over the walls and I looked at him and say, "What the fuck are you doing?" and he says, "It's not mine!" And then there's the guy with the catheter who ordered a screwdiver, no ice, and shot it into his tube and gave me a thumbs up. That's just the beginning.

(Dave proceeds to ask Derek, "Were you here when the customers tipped the car over in the parking lot? Did they set it on fire or just tip it?")

When's the busiest time here?
It's weird. Usually Saturday night, Saturday morning. Saturday is our busiest day. But there's always people in here. You could come in at 4 am and there's people here. It gets weird sometimes.

Do you think there's room for more 24-hour diners in Seattle?
It's hard to say. We're busy, but it takes a lot of extra effort to run something 24-hours, because, one, you never close and so there's a lot of work you do as a restaurant when you're closed. I think Seattle as it grows it will become more of a 24-hour city.

What are the things that you have to do when you're open that most restaurants do when they're closed?
You have to clean while people are here; you end up cleaning at 4 am and you end up getting your orders coming in at 4 am so that you can put them away when it's slow. You have to staff that whole time. Things go wrong at 3 or 4 or 5 am so the management and I have to be available basically all the time. You have a lot more staff and it's harder. Things like getting food consistent through four shifts of people every day as opposed to one or two shifts that some restaurants have. It's hard. It's a lot of different cooks and you have to get them all consistent. That was really hard when I took this place over — figuring that out and figuring out how to get a kitchen manager who could really make that work. 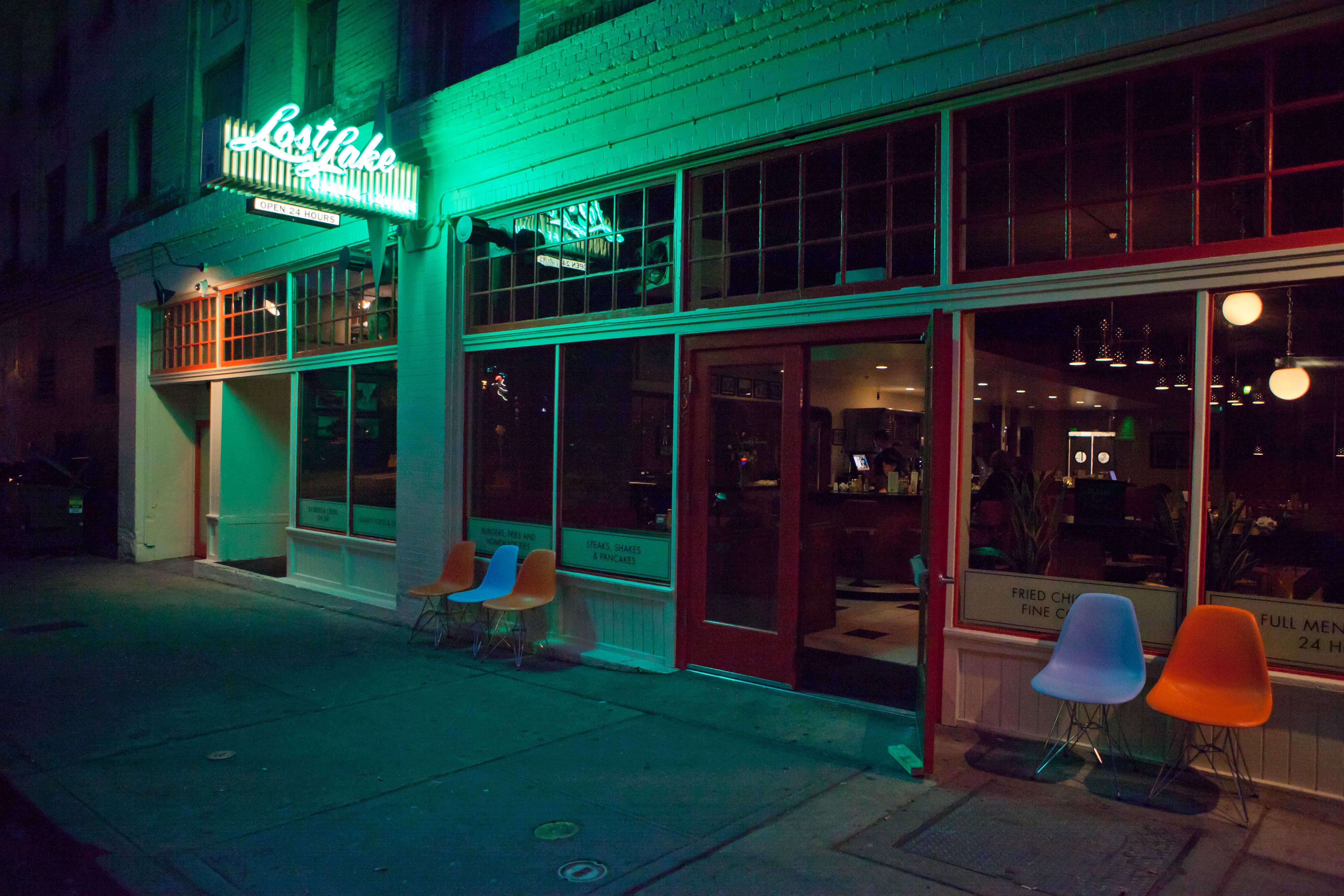 Could you have opened Lost Lake if you hadn't bought The 5 Point?
No way. But that said, it's so different than this and it's been really difficult learning. It's different taking over something that's already running than opening something new. The thing with Lost Lake is it's larger and just larger enough that it took some extra staff stuff that we didn't know about, like having a host all the time and having a food expeditor almost all the time and we don't need that here. It's been a big learning curve, but that's kind of how it goes opening somewhere. It is a clusterfuck opening up a restaurant. But we like to do things we've never done.

Moving forward, do you have any changes planned for the 5 Point?
No. I might put a cover over the outdoor seating so we can keep it open when it rains. But not really. This place is what it is. And I think, to me, I love all of the new restaurants in Seattle and I love people experimenting with the food and I am also kind of bored with it. Part of the appeal of this to me is that it's kind of what Seattle was, it's just real food. It's cheap and unpretentious and it's fun. There's a grittiness to it I think a lot of restaurants have lost and that's all fine, there's a place for that, but it's nice to have a place that you can come home to.