A Day in the Life of the Beth's Cafe General Manager

Share All sharing options for: A Day in the Life of the Beth's Cafe General Manager

Meet Janelle Snyder. She's the chick in charge of Beth's Cafe. And she's seen some stuff. She's also very camera shy, but you'll know her when you see her: she's got a tat of her nephew's newborn foot print on her right forearm.

Originally hired on a swing-shift cook, she was promoted to general manager after just six months. It's a job she's held for the last decade. Snyder has been in the restaurant industry since she was 15, starting out as a hostess at Coco's in Edmonds. That's where she learned how to bake, wash dishes, cook and (kind of) manage. And then there was that brief hiatus where she found herself doing accounting: "I hated it. Sitting in an office is just not me."

Now, she's found what she believes is her permanent home. "At the cafe, it's very family-oriented. We're 30 people who run a 24-hour restaurant. We're really tight knit. I can't imagine being anywhere else."

If you want to say "hello" to Janelle, she works Wed-Sun and does paperwork on Tuesdays. Here, in Janelle's words, is a typical day at work.
6 am — I get in. I usually get there about 10 minutes early and sit outside and read the news and stare at the cafe (laughs). For the first two hours, I don't have a waitress. There's just a cook and me. I set up for the waitress — cut fruit, pull jam, set out creamers for coffee, make filters — basically, I am a waitress for the first two hours.

8 am — The waitress comes in. The util — that's our dishwasher slash busser slash prep cook guy — comes in too. Then, I immediately go into the back. I have three orders a week — plus a meat order, plus a coffee order — so I have to go through all the inventory and everything, do the deposit from the day before, drop that; that takes up about an hour of my time.

9 am — By this time, I'm on the line because the cook gets his break. Typically on Fridays I stay on the line anywhere from another 15 minutes to a couple hours. It depends on how busy we are, if we need a second cook.

9:30 am — The until goes on break so then I'm on the floor bussing, washing dishes, making gravies, doing all that other stuff.

10 am — The waitress goes on break so then I become the waitress again. I wait her tables for 30 minutes.

10:30 — The restaurant's usually pretty full. It just depends on where I'm needed. I am bussing tables, seating people, cashing people out, jumping on the line back and forth. When the line gets super crammed — because there's only one cook on the weekdays — I'm on line with him doing omelettes, toast, eggs and everything else for him.

11 am — It slows down. I usually go outside and stare at the cafe for another 10 minutes. Lunch rush hits.

1 pm — Everything's kind of slowed down and I start counting out the waitress's tips because they tip out a lot; they tip out almost 50-percent of everything that they make. It goes to the cook and the host and the dishwasher and everybody. So I count everything down for her. 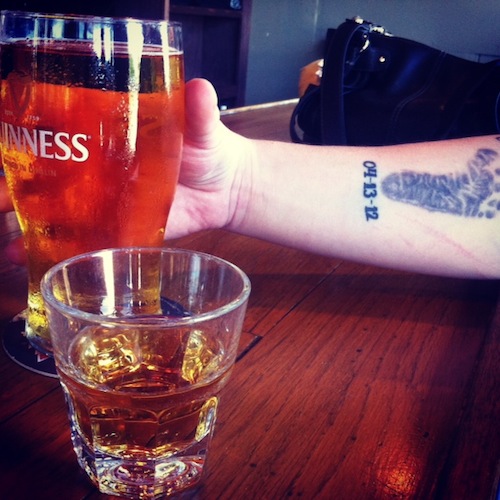 How do your weekend shifts differ from the weekdays?
Weekends are a little bit different because I have two cooks to break, two waitresses to break and two utils to break. It's definitely a little bit more hectic on the weekends. I start at 6 am, same thing, come in. Usually for the first half hour to an hour you're trying to get all the drunks out of the building and, man, they make a way bigger mess than our day shift people do, so bussing one table takes 10 minutes versus two. Usually on the weekend I'm on the line by about 8 am because we get swamped.

Do you see a lot of weird things go down working here?
Yes. I had a guy come in once — I was working a graveyard shift — a homeless man, obviously a little nuts. He came in, stood up on top of the counter and started screaming about how he was a vampire. He worked for the CIA, knew kung fu and he was Nosferatu! So, I was talking to him, I get him down, I'm walking him out the front door. Our cook at the time — this was nine years ago — started yelling at him and that just set the guy off. He turned around and sucker punched me right in the jaw. Inside the cafe though — and this is the family aspect of it — both cooks, both utils, a regular who was a bouncer at a bar and a cab driver outside — both of those two gentleman are large, strong men — took about four steps and the guy ran out in the middle of Aurora. This was at about 4 in the morning. I've seen people having sex in the game room on top of the pinball machines, I've seen fights, I've seen bad ones with bad stuff. When I first started working here, before they kind of cleaned this area up, all the hookers used to come in. They'd used the pay phone, get a hot chocolate. They were the nicest ones out of everyone. We loved them the best.

How has Beth's changed since you've been here?
In the last few years it's turned around. [Owner] Chris [Dalton] and I have added homemade baked goods, freezer jam. We make a lot of our own stuff now: burgers, our meats, country fried steak, corned beef hash, real biscuits, real chili. We started making our own soups. Food is my life. We're still a greasy spoon, but I want a greasy spoon that serves food that still tastes good.

Let's talk about the 'Man vs. Food' episode.
We've been on the Travel Channel six times. After the "Man vs. Food" thing, the restaurant blew up. We started doing amazing, amazing, scary numbers. The day after it aired was a Wednesday and I had a skeleton crew on. We had an hour-and-a-half long waiting list at 11 in the morning. It stayed like that for two years.

Have you ever eaten the 12 egg omelette?
Never. I have never even eaten a six egg omelette. When I want an omelette I make myself a two-egg omelette.